The Meeting
If you remember from a previous post, the NRC was going to have an open meeting in Brattleboro on Monday, April 12. They need a bigger venue for their meeting, and I am not sure if it is scheduled yet. However, Entergy is having a meeting about tritium on Monday, the 12th. Here's the information and link. Come out and support the plant!
A public information session is planned for Monday afternoon about tritium found at Vermont Yankee. The information session is scheduled to take place at 4 p.m. until 7:30 p.m. at the Ramada Inn on Putney Road in Brattleboro, Vt.
Opponents will probably be out in force (Brattleboro, you know) eager to convince one and all that the plant has done them irreparable harm, and maybe even killed them already. Don't let the presenters be marginalized by the antics of the anti-s. Plant support may have fallen (statewide) from 40% to 30%, as I noted, but VY supporters are not a fringe group. Thirty to forty percent is not fringe. We are mainstream--as long as we stand up for ourselves. We can become the majority. 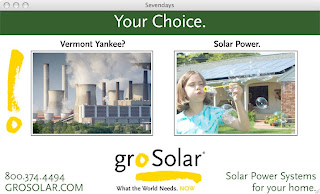 The Advertising
The antis are doing false advertising again, and this time it's kind of funny. If you remember, the anti-VY walkers chose to debate with a comic who pretended to work for the nuclear industry. They never mentioned that he was a comic. They didn't mention it in the ads, and they didn't mention it at the debate. On the other hand, while the Sierra Club wrote their ads as if the Montshire Museum was sponsoring their Chernobyl play, they did acknowledge sponsorship once you arrived at the meeting.
This case is funnier. Gro-Solar, a local solar company, had the ad shown above in a magazine called Seven Days. The ad was found by the Vermont Tiger blog, which points out that Vermont Yankee doesn't actually have smokestacks. It's worth reading Vermont Tiger's post about Truth In Advertising and some of the comments about other ads. For comparison, a later Vermont Tiger post links to an actual photograph of Vermont Yankee, but warns you how scary it is.
Usually my graphics come from Wikimedia. In this case, I lifted the Gro Solar picture from Vermont Tiger's website. I admit it. I don't think they will be mad.

Don't forget. I'm still running the Helen Caldicott Satire Contest. Why cars, toothpaste and paper (so far) are terribly dangerous. Get your entry in soon. Contest ends April 15. Enter early and often!
Posted by Meredith Angwin at 11:57 AM

No smokestacks, and the cooling towers look nothing like that either. And the conveyor is suggestive too - somebody will know which coal power plant that is, unless it's a composite picture.