Canadian Tritium Study: What Does It Mean for Vermont Yankee? 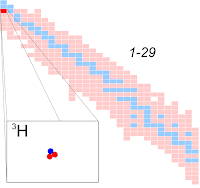 I think you summed the report up nicely. It should be noted that the lowering of discharge values was motivated more by a desire to coordinate standards with those of various health departments across the country. These were, or are about to be brought in line with the EU numbers in the near future.

It's not just research reactors that lead to higher tritium releases. The CANDU reactor uses heavy water as a moderator, which since it absorbs fewer neutrons than regular light water, allows for the use of natural (unenriched) uranium. Unfortunately, that means what neutrons are absorbed by the water form tritium. Hence, the tritium level in the coolant is way higher, and any coolant loss has way more tritium.