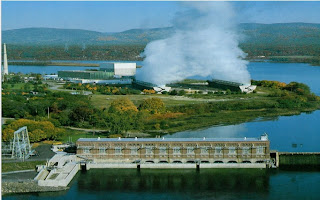 Recently, the grid operator decided that, starting next year, Vernon Dam will no longer be "maintained as a black start unit." Due to that change, Vermont Yankee will have to ask the Public Service Board for permission (Certificate of Public Good) to buy a new diesel generator and pour a concrete slab to hold it.


Reading this material, it's hard to understand what is going on.  Does the plant need a new diesel generator for safety in blackout conditions? Is "blackout" the same as "black start"?

Whatever it means, the usual-suspect intervenors are getting set to intervene.  According to this article by Bob Audette in the Brattleboro Reformer, Ray Shadis of NEC has already offered his opinion, which includes the idea that "the state even today regulates certain aspects of existing emergency generators -- such as exhaust emissions, petroleum leaks and noise," he said.  Other groups are also considering intervening in the diesel placement.

To avoid station blackout, all nuclear plants have other backup sources of power, all of which have to approved by the NRC.  At the end of the year, apparently, Vernon Dam will no longer be a black start plant, so the NRC will no longer approve it as a backup power source against Vermont Yankee station blackout.

All three "black" conditions start the same way: the grid goes down.  Power isn't flowing. The nuclear plant has a loss of offsite power. At that point, however the three terms diverge: blackout, station blackout, and black start  are different.

Nuclear plants have lost offsite power many times.  This is grid blackout. When this happens, the reactors scram automatically, because where are they going to send their energy?  No grid, no place to receive the  power.  At that point, the emergency diesels begin operating and cool the reactor.  This has happened many times all over the country.  That is grid blackout, and the plant takes care of itself.

If, for some reason, the plant diesels didn't start, the current next step would be Vernon Dam providing power.  Vernon Dam would prevent "station blackout."

Black Start refers to the grid.  When the grid is down, plants have to be brought on line to restart it.  There's an entire sequence of events to energize a grid, and I am beyond my depth to describe it all.  However, I do know that hydro plants have generally been  the "black start" plants.  It takes very little power to start a hydro plant (opening gates rather than starting big pumps) and then the hydro plant supplies power to the grid.  Next, other plants use the hydro power to start their pumps.  Eventually, the whole grid is re-energized.  The workers at Comerford Hydro plant first explained this to me when we visited the hydro plants on Energy Safari last year.  Wikipedia also has a good article on black start.

One of the reasons I like the picture of Vermont Yankee and Vernon Dam at the top of this post is to show the differences in power output. Vernon Dam, like all renewable sources, tends to be land-hungry.  The dam floods a large territory, and makes only 34 MW  of power.  Vermont Yankee makes 620 MW.

Small is Not Beautiful

The small size of Vernon Dam has become a problem to the ISO grid operator, Recently ISO-NE managers have decided that big plants, not small hydro plants, will become the black start plants.   As the Brattleboro Reformer article states: The current (ISO-NE) plan calls for smaller generators, such as the Vernon Hydro Dam, to go online first. The new plan calls for the biggest generators to startup first.

Apparently, when the grid operator decided that Vernon Dam will lose its Black Start qualification, the NRC decided that Vernon Dam was not going to be maintained well enough to be a source of backup power for Vermont Yankee  With the loss of Vernon Dam as a qualifying back-up, the plant will have to buy another diesel generator.  Vermont Yankee will keep its connection to Vernon Dam.  However, that connection will not "count" in the NRC assessment of plant safety.


According to the Wikipedia article and the Brattleboro Reformer article, ISO-NE has been revising its black start procedures and incentives.   I didn't quite understand why ISO has made this change: hydro plants are traditional black start plants, and Vernon Dam hydro was recently refurbished and upgraded.  I called ISO-NE and Lacey Ryan was kind enough to answer my questions and send me a link  to ISO-NE's position paper on the "Black Start" change.

Basically, with small hydro plants as "Black Start", ISO predicts it will take many hours for the grid to be re-energized.  However, with more large natural gas plants on the grid, using these plants as Black Start plants will bring the grid up sooner.  Natural gas plants can come up to power very quickly, with limited auxiliary equipment.  This is why they are back-ups for wind turbines, and why ISO is designating them as Black Start plants on the New England grid. Much of the information about this choice is on pages 6 to 9 of the ISO document. Starting the grid will be "top down" in the future, with big plants coming on-line first, rather than bottom-up, with small plants first.

What Does It Mean?

Plant opponents will somehow claim that this shows Vermont Yankee wasn't safe and shouldn't be operated until it gets a new diesel.  That is not the case.  The Vernon Dam plant will be re-classified by ISO-NE, but nothing else has changed. Due to the re-classification, the NRC will also reclassify it and require a new diesel for Vermont Yankee in the future. The NRC's rule is a typical forward-looking safety requirement for the nuclear industry. Things change, and the NRC stays on top of the changes.

However, any time new equipment is required or a new hearing must be held, plant opponents become energized and active.  That's pretty much the only thing wrong with this story.

A huge thank you to Howard Shaffer for reading and correcting an earlier version of this draft, and to Lacey Ryan of ISO-NE for her help.  Grid operation is not my strongest knowledge base, and I welcome further comments and corrections from my readers.

Posted by Meredith Angwin at 9:00 AM

What likelihood is there that Shumlin & Co. can use this as an opportunity to deny a CPG for the backup diesel's that Entergy now needs to install to satisfy the NRC, thus forcing the NRC to revoke VY's license?

I suspect that Shumlin and his supporters will view this as the lever they need to force VY to shut down, if they can at all prevent VY from getting the new diesel they need.

They may well try this. On the other hand, many homes and some businesses and most hospitals have back-up diesels, so I think they would have a hard time, in a court of law, making it stick that THIS back-up diesel was too much of an environmental hazard (or whatever) to allow it to be bought and installed.

A minor correction! EDG are designed for the worst case accident which in VY case is a large break loss of coolant accident. During a LOCA, large injection pumps supply water to keep the core covered and thus prevent damage.

A loss of off site (LOOP) does not require much power to remove decay heat. Typically GE BWRs have two steam driven high pressure injection pumps that startup on a LOOP. Controls systems are battery backed incase the EDGs do not start.

After 9/11, we started thinking differently about a station blackout. Unexpected events like a burning air plane could make it harder to restore AC power.

What the heck am I complaining about...I got what I wanted.

Kit is right, in the short term. Steam driven pumps put in water which boils off. This cools the reactor.
The steam goes into the conatinment, heating it up eventually the conatainment needs to be cooled. This requires AC power.

Yes, but not very much. When I had responsible for decay heat removal at nuke plants, we had emergency plans that considered many emergencies.

So what about a catastrophic natural disaster? What is your plan to supply food and drinking water to your children?

What is your plan to transport school children to the nuke plant to expose them to radiation?

What I get to the part of my what-if scenario where hundreds of thousand are staving or dying from pathogen contaminated drinking water, I ma thinking that decay heat is the least of societies problems.

Consider the world media to the aftermath in Japan compared to Haiti.

The turbines have never been tested to run in their emergency mode...bring the plant to a cool down?

Of course the turbines have been tested. They are tested every quarter. During plant startup the turbines under go extensive testing. That is what I used to do. We trick the equipment into thinking there is an emergency.

Nuke plants are designed to operate with only one EDG in an emergency. In our design analysis, we assume that one EDG does not start. We would also assume the LOCA would disable one of the steam turbine system.

Normally during a loss of LOOP everything works fine.

New power plants are required by FERC to keep producing house loads with the main generator if the grid is lost to shorten the time for restoring the grid. This is done by dumping steam to the condenser while the control system backs down

I spoke to the senior resident inspector about said issues for about an hour. I was utterly shocked how comprehensively he answered my questions. Shocked as hell how much he knew about the VY DG and its service water cooling support.

We are now prepared for the next LOOP.

Yes. Thank you. I had seen this, but hadn't linked to it.

The new information in this story is about Entergy asking NRC and PSB about the generator, and NRC saying it wasn't their requirement that VY buy a diesel. I find that unclear, because I believe NRC said that VY has to have something to replace the Vernon Dam as a backup, and of course, a diesel would be the replacement.

EDG's are viewed differently than simple backup D/G's like you'd find at a hospital. For example the new AP1000 diesels aren't EDG's, so they have to meet EPA regs that EDG's would be exempt from.

The black start process can bring a nuclear power station back online which was earlier only possible with hydro electric plants. The first Black Start was initiated in Toronto in 2003 following a city-wide blackout.