As Germany goes, so goes Vermont?

“As Maine goes, so goes the nation,” went the political truism between 1834 and 1932, when the Pine Tree State picked the winner in almost every presidential election. When only staunch Republican (!) Vermont joined Maine in selecting Republican Alf Landon in 1936, winner Franklin D. Roosevelt’s campaign manager James Farley famously if somewhat predictably quipped: “As Maine goes, so goes Vermont.”

Eighty years later Vermont is following another trendsetter:  Germany, the Western world’s undisputed leader of government-subsidized renewable power. Visitors to Germany note that solar panels cover the south face of seemingly every village church, school and home. Germany is home to a well-funded, highly popular “feed-in tariff” (FIT) that has encouraged almost broadbased power production. Of the 40 GW of installed solar power worldwide at the end 2010, almost half – 17.4 GW – was located in Germany. In just two years Germany’s share jumped to about 30 GW, according to the Feb. 2013 Washington Post. 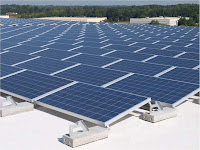 The German program was an inspiration to the crafters of Vermont’s May, 2009 feed-in tariff law, the energy-generation lynchpin of the state’s plan to use 90% renewables by 2050. Then Senate Pro-Tem (and now Governor) Peter Shumlin was particularly enthusiastic. In March, 2010 he told Fox News that if overcast Germany can get 30% of its electricity from solar power, so can America. He said this just days after leading the Vermont Senate in its “no” vote on Vermont Yankee. (When Fox reporter Stuart Varney pointed out that Germany gets just one percent of its power from solar, Shumlin conceded the error but has never retreated from his central point: Vermont, like Germany, can become a leader in the new renewable power energy economy, resulting in new jobs, clean air, and energy independence.)

Like its European forebearer, Vermont’s FIT solar power program also contributes about one percent to the state’s total power portfolio – actually, about one-third of one percent. The state’s SPEED website lists 13 projects (see “project summary” page) as “online and generating,” producing about 18,000 MWh of Vermont’s total load of about 6,000,000 MWh. (The FIT program for ALL forms of generation comes in at 53,000 MWh, or just under the one percent mark.)

German FIT solar power costs about 32 cents American per kilowatt-hour. Likewise in Vermont: FIT solar power is down from 30 cents to 25.7, about five times the average market rate. And while market power rates fluctuate – for better or worse - the Vermont FIT solar power rate, once set, is fixed in contractual stone over the course of the 10 year contract.

As in Germany, Vermont opponents of nuclear power were empowered by a nuclear “incident” that helped them reverse government support for nuclear power. The Vermont Senate’s 2010 vote was held amid a powerful public response to reports of a tritium leak at Vermont Yankee. In May 2011, in the wake of Fukushima, the German government announced plans to close many nuclear plants. Although Germany followed Vermont chronologically, the decisions-making process was similar: the politically astute realized that a sense of crisis had moved matters to a tipping point.

The pro-renewables, anti-nuclear policy has had an unexpected effect in both locales: they are more reliant on fossil fuels. Germany has been an acknowledged leader among the “green” nations of Europe. In 2011, Vermont had the nation’s smallest carbon footprint for power generation, thanks largely to its reliance on hydro and Vermont Yankee.

A Step Backwards for the Carbon Footprint

In carbon terms, both have taken a step backwards. According to a February 27 2013 Bloomberg News report, Germany plans to build 6000 new megawatts of coal-fired power generation, a move which will significantly increase their overall carbon footprint. The pragmatic Germans realize they need plentiful, domestic, baseload power capacity to support Europe’s strongest manufacturing economy. Deprived of nuclear power, the German government is turning – back – to coal.

In Vermont, something similar has happened. Vermont Yankee’s contract providing about a third of the state’s electricity expired in March, 2012. Vermont’s reliance on New England grid power jumped about one million megawatt-hours in 2012 over 2011, according to “Vermont Electricity At A Glance,” study I conducted for the Vermont Energy Partnership. That figure equals one-sixth of Vermont’s total electrical load. About three-quarters of the grid’s power is derived from fossil fuels, mostly natural gas.

Concerns about the technical Achilles Heel of intermittent power - grid instability - are present in both Vermont and Germany. The August, 2012 Spiegel Online reported that large German manufacturers have experienced expensive power interruptions related to the transition to renewable power. In Vermont, the New England transmission grid operators have “curtailed” its purchases of power from the Lowell Mountain wind turbine development due to intermittency, resulting in a million dollars of lost income this winter, according to the general manager of one Vermont utility quoted in the April 5, 2013 Vermont Digger. The project’s owner is installing a synchronous condenser - $10 million pricetag – that it hopes will solve the problem.

It is only fair to point out that in neither Vermont nor Germany has the final chapter been written. Perhaps solar power will prove to be greener, in both cash and carbon, in the long run.  Someday, a bright engineer may solve the problem of “translating” intermittent power into a traditional power grid. No doubt renewable power is delivering many positive benefits right now, including energy diversity, property tax income, and strong growth in solar-related employment. Solar power’s cost of production has decreased somewhat in recent years, in part due to fierce competition from China’s solar panel producers. Nevertheless, it’s a safe bet that when the avid backers of solar power in Vermont and Germany celebrated the passage of their FIT laws, few of them were anticipating that the immediate future would have more carbon and serious concerns about power cost and reliability.

Guy Page is a frequent guest blogger at Yes Vermont Yankee. His most recent blog post described his report on Vermont's transition to renewable energy.

Posted by Meredith Angwin at 7:00 AM

Great article. It seems that in Germany and Vermont the question of "Where are the numbers?" was never asked.

Bundled within it is a stupidly simple question about this headless frantic soul-soothing dash for "renewables": Why Bother?? Just why are people in such a dash to run from a "HERE" and Now clean and plentiful fuel source? Did Germans REALLY take a look at why they're running? Did anyone ever adequately educate them out of their fears (obviously not) to spare them billions of dollars and a degraded environment in the future just to assuage their FUD nightmares? Get the media to stop the fear train and look back at what they're running (and viewers and voters from) and quit looking gift horses in the mouth!

Synchronous condensers are just synchronous motors running without a load.  They do not store significant amounts of energy and don't address intermittency.  They are used to generate "reactive power" (VARs, Volt-Amps Reactive) which is necessary for AC power transmission.

If a wind project needs a synchronous condenser, I suspect it's using induction generators and causing surges in VAR demand as the wind varies.  Fixed capacitors could not address this easily, but a synchronous condenser can have its VAR production varied continuously according to need.  That may be what's going on there.