Books for Climate, Books for your Nuclear Family

Now that Thanksgiving is in the rear view window, it is time to go shopping.  Meanwhile, the long-awaited Climate Conference (COP21) begins tomorrow in Paris.  Therefore, I will take the opportunity to encourage my readers to read two excellent books about nuclear power and climate change.  And to give the books as gifts, too!

These books address two fundamental questions of our time: 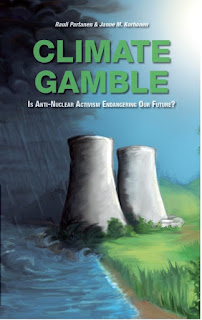 I first heard of this book by two young Finnish authors when they were running an Indiegogo campaign. They were raising money to give away free copies of their pro-nuclear book at the COP21 Climate conference in Paris. As you can see by this press release, they raised enough money to distribute 5000 copies of this book in Paris.  A pre-run of the French edition will be available for COP21.

Read this book to learn exactly why the climate needs nuclear energy and exactly how the nuclear opponents tell straight-up falsehoods to claim that nuclear plants create as much carbon-dioxide as gas-fired plants.  Learn when the anti-nuclear groups started saying this about nuclear power plants, and who said it first.

Buy the book. Prepare to be shocked. 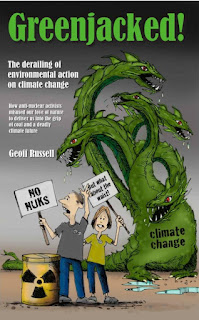 Geoff Russell is an environmental activist and an animal activist in Australia.  In this book, Russell compares the carcinogenic properties of radiation with those of obesity, red meat, and alcohol--all are far more potent cancer-causing agents than radiation is.  (Note, on the cover, the woman with a sign saying "But what about the waist!"  That is indeed the question.)

This brilliantly written book illustrates DNA repair mechanisms, compares radiation and smoke, describes the death of Shoreham and the rise of oil-fired electricity, and catalogs the "deadly failure of governance" at the Fukushima evacuation. As Russell describes the current situation: a rich "fabric of mythology" tightly binds nuclear weapons and nuclear energy.

The Greenjacking of the environmental movement is having severe effects on our health, and the health of our planet.

Buy the book. And read the excellent article and comments about Greenjacked in Brave New Climate.

---
Note:  I am painfully aware of many excellent pro-nuclear books that I have not mentioned here. I reviewed these two books in particular because they will help people learn about climate-and-nuclear in time for the newspaper articles about COP21.

Buy both books, read both books, and give them as gifts, too!
Posted by Meredith Angwin at 4:55 PM