A few weeks ago, I announced the Caldicott Contest on this blog.
The rules were as follows:
Write an essay of up to 300 words. In this essay, do for another industry or product what Helen Caldicott does for nuclear. The winner would be a guest blogger, or receive a bottle of wine, or both.
I kicked off the contest with an example of a rant about your car destroying your neighborhood and the entire ecosystem. While parked in your garage.
The three entries we received were much better than my example:
They were all funny. Very funny. I couldn't decide.
So I asked my husband to choose. He's a mathematician. You may think that mathematicians are not stand-up comics. You're right. Still, he has a good sense of humor, and he needs it, being married to me. Being married to me, he also made sure I understood that his decision was final, and not the beginning of a discussion. I agreed. 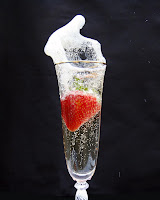 The winner is: David Lewis! George loved how Lewis followed Caldicott's diction, including the barely contained tears. David's post exceeded the word count, but it won first prize anyhow. Okay. So maybe it wasn't the best-run contest... David, I hope you will be guest blogger sometime this month. Please email me. I would also like to also provide you with a bottle of wine if possible. My email address is in my profile.
Here's David's post. Kit and Joffan's essays can be read in the Comments section of the Caldicott Contest post. You will enjoy reading them.
The Winning Entry By David Lewis
It is my great pleasure to introduce to our audience here at Gibbering Idiots Unleashed On Audio, Helen Caldicott.
"Good morning Dr. Caldicott. You've been writing and speaking on the dangers of solar power since the first hydrogen bomb exploded in the early 1950s, yet this horrible and dangerous nightmare that civilization is involved in continues. Can you give us your assessment of the situation today, after your 60 years of work trying to keep this catastrophe from happening?"
Caldicott: "Well I think the human race is bent on a suicidal mission. I can't describe it in any other way. And I think I will go back to Albert Einstein who so long ago said, prophetically, that the fusing of hydrogen and the collecting of the power produced changes everything save man's mode of thinking, thus we drift toward unparalleled catastrophe. (chokes back tears in a very dignified manner)
During the crazy, crazy, Cold War, America and Russia built 1,529,893 times as many hydrogen bombs as would be needed to destroy the entire Universe. Every planet in the Universe, every city in every country, every child's playpen, right down to each sock in each precious little child's chest of drawers, is targeted with at least twenty of these hydrogen bombs. If even one thousandth of one of these bombs went off, the nuclear winter bomb war blast horrible radiation insane exploding mutant end of the world would be here. And so we are on a suicidal path. We come close to nuclear annihilation many many times each day as, at the whim of the uncontrollable twitching of the fingers of the leaders of Russia and American on the button that will launch and explode every last one of these bombs, we are threatened with the end of the Universe at any instant. I don't know why we are still here.
And at the same time, back on the farm, the evil solar power industry has gone berko and wants to build solar power stations by the thousands and millions. All over the world. And they know that solar power in itself increases global warming because just thinking about it releases massive quantities of deadly global warming gas. Each solar facility is massively expensive and the entire enterprise is subsidized completely by the federal taxpayer. But the solar power industry says, in a lie, that it is the answer to global warming and that it will build solar collectors left right and center. So we are on the path to annihilation. This is because any country that has solar collectors has access to hydrogen bombs, and that means plutonium triggers, which are produced in nuclear reactors. 500 trillion tons of plutonium are produced in one reactor each year and you only need one tenth of a picogram of plutonium, (with a confiding tone) it actually only takes one fifteenth of an attogram (which is billions of times less material than one picogram), to make a nuclear bomb. (more choking back of tears in a dignified manner). And so, as the solar industry expands, as each country obtains solar collectors and power stations, and thus gains access to evil hydrogen fusion power, that is, hydrogen bombs, that destabilizes the balance of terror between Russia and America. And so, for instance, if Lower Slobbovia decides to aim its solar collectors at Upper Tuckus, for as much as one second, the anxiety would be so high, that it is inevitable that Russia, America, and every other solar power using country in the world will launch their weapons, and every hydrogen bomb in the world will all blow up at once. And that's the end of life on Earth. And so, when we see the solar industry on stage, remember, the backdrop is hydrogen bombs exploding ending all life on Earth."
People interested in more of this extremely important, very timely and rational discussion should download the rest of this podcast from Authors Audio, entitled Nuclear Power is not the Answer - Helen Caldicott.
Photo of strawberry in champagne courtesy of Wikimedia and Steve Ryan.
Posted by Meredith Angwin at 7:36 PM