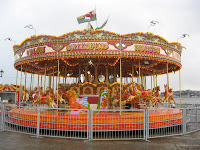 The 70th Carnival of Nuclear Energy Bloggers is up at ANS Nuclear Cafe. As usual, Dan Yurman has put together a great compendium of blogs on all phases of nuclear energy!
At Atomic Insights, Rob Adams thinks about calling some types of renewable resources (such as wind) unreliable instead of intermittent. In a similar vein, at Atomic Power Review, Will Davis wonders why people still buy the myth that solar energy is a rival to nuclear.
NEI Nuclear Notes discusses the Union of Concerned Scientists and their accusation that nuclear plants are "stonewalling" about their security upgrades. Not in the least. The nuclear industry had published quite a bit about some of their new security initiatives, such as "force on force" exercises. Nobody gives all the facts on security, because if you say you have twenty men on site, the enemy can send twenty-one attackers. "Loose lips sink ships" as they said in WWII. The Union of Concerned Scientists do not get to decide how much information must be released.
At Next Big Future, Brian Wang describes how many plants are on-line right now, and how many are planned and under construction. World nuclear power production is due to double by 2030. Along the same lines, Gail Marcus of Nuke Power Talk makes some predictions (similar to Brian's) and CoolHandNuke explains why China is contemplating a Chinese-designed 1700 MW plant.
At 4 Factor Consulting, Margaret Harding looks into the history of major anti-nuclear organizations. The Sierra Club used to be pro-nuclear. The Union of Concerned Scientists nearly dissolved after atmospheric testing was ended: then they discovered nuclear power as a new enemy and saved their organization. Friends of the Earth was founded in 1969 when Brower split with the Sierra Club about nuclear power. Since it is their founding principle, they have been consistent. Greenpeace sometimes uses violence against nuclear facilities, but their anti-nuclear stance is not very important in their official mission statement.
Looking at the fuel cycle, Steve Skutnik at Neutron Economy reviews the Blue Ribbon Commission report. It has some good ideas. At Idaho Samizdat, Dan Yurman assesses whether Areva is going to freeze investment at the Eagle Rock Enrichment facility. Areva will probably continue to invest. At ANS Nuclear Cafe, Cornelius Milmoe considers what will happen now that the NRC has terminated the Yucca Mountain proceeding. Well, a court case will happen. If you are interested in court cases, there's always my own blog, and the court case between Vermont Yankee and Vermont-Shumlin in Brattleboro.
Come to the Carnival! Have fun! Enjoy the newly-chilly nights by sitting cheerfully inside your house, reading good stuff about nuclear!
Posted by Meredith Angwin at 4:47 PM