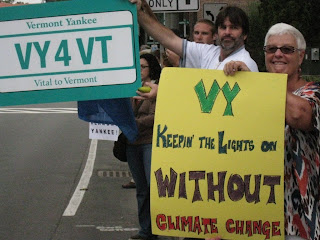 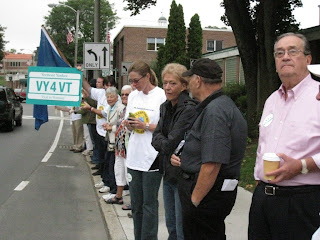 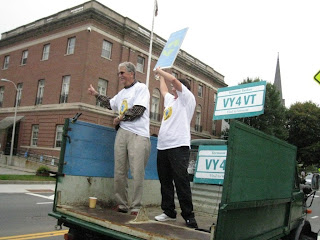 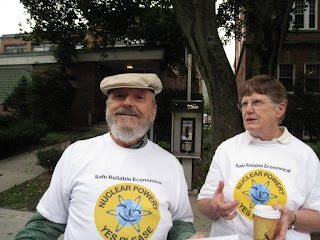 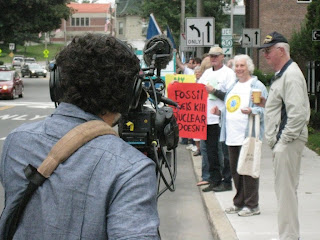 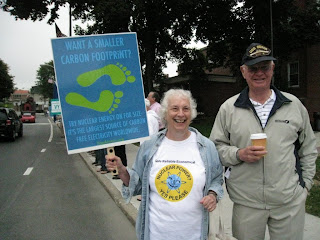 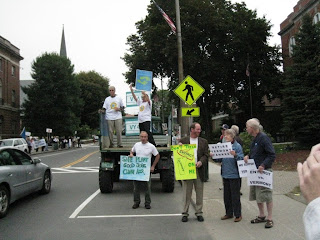 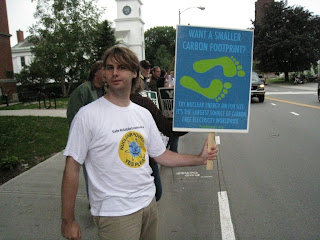 The Rally in front of the courthouse yesterday was a lot of fun! Here's the press release that announced it.
It was fun because there were so many of us, and we were so visible, and we supported each other.
We had about twenty-five people there: there were twenty on the sign-up list, and they all came and some brought friends. The Rally started at 7:30, and we had more people out there than the opponents did, by far. At 7:30. By 9, when court opened and we left, they had more people, but we were still a very major presence.
Note the T-shirts. Note the truck, driven down by one of the men from the plant, representing IBEW. Great platform for us. Note some of the opponents standing in front of the truck. (They didn't make much headway where we were standing, and tended to go away after a while. They were in full force across the street.) Yeah, there is a picture with me in it, and a picture of Robbie Leppzer, the documentary maker, taking pix of us. Also, the blue banners are Vermont flags. The opponents carried them to show that they "support Vermont" in the lawsuit. Since we support Vermont, too, (though not in this lawsuit), I have wondered if we should have also "wrapped ourselves in the flag", as it were. Well, lessons for next time!
Our Handouts
We had a neat tri-fold brochure and a set of FAQs about Vermont Yankee. They are posted at the Energy Education Project website of the Ethan Allen Institute. George Angwin and Richard Schmidt were the main authors.
The Trial
For updates on the trial, I recommend the Vermont Law School blog. They are live-blogging the trial.

End note: I apologize for the formatting. I have never added this many pix to a blog post, and I am running out of time to make the formatting better.
Posted by Meredith Angwin at 6:47 AM

I really like the brochure – you set a positive agenda and don’t waste time with theirs by trying to explain tritium or buried pipes.

I too like the brochure you handed out. Simple, too the point, but packed a lot of important info into a small space.

One question I have about one of the statements made in that brochure:

"One example is . . .A power station capable of generously powering a community of 10,000 can be built for the cost of a 747 aircraft."

Just out of curiosity - does that "community" include the power necessary for things running the schools, post office, small retail establishments, grocery stores, restaurants, recreational facilities, houses of worship, office buildings, and small/medium industrial facilities that one might expect to find in a community of 10,000 people?

Or, is that a more simplistic estimate based just upon the energy demand that houses and apartments for 10,000 people would be expected to create?

Funny you should ask! That is exactly the issue that George is checking out right now. I believe the number includes restaurants and so forth, not just houses, but there are different ways of estimating and he is working on that.

The idea is that the brochure is Rev 1, it has things as accurate as we could do, but we are refining some of the numbers. We won't have big changes, but some refinements, I think!

Good to see a rally turn out so! Since the media was probably in tow it would've been good to've also seen more anti-fear pro-education signs up of nuclear's enviable worker-public health record/tally vs other industries -- including accidents, and de-mystifying radiation and its exaggerated effects. But all in all looks like a good turnout!

So, are there any rulings from the judge or any other news that has come out from Entergy's day in court?