The Tenth Anniversary and Conspiracy Theories 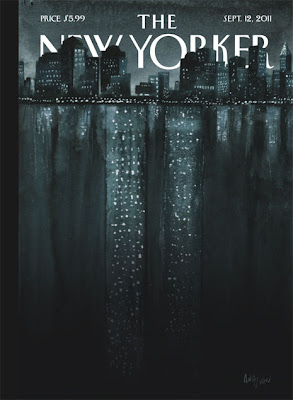 The tenth year anniversary of that grim day. This week's New Yorker cover says so much: Reflection.
September is the month of reflection. It contains September 11. It holds the beginning of the High Holy Days. On a personal note, September is our anniversary month, and our son's birthday month. September gives me many opportunities to reflect.
Like the reflections of the New Yorker cover, the Towers are in my heart.
The Moving Finger writes; and, having writ,
Moves on: nor all thy Piety nor Wit
Shall lure it back to cancel half a Line,
Nor all thy Tears wash out a Word of it.
What did I learn from 9/11? Things I learned, and that I manage to forget all the time.
The Enemies We Are Comfortable With
I see bumper stickers frequently: "9/11 was an inside job!" I think this is a very comforting belief for some people. With this belief, they don't have to learn how to live in a complex world where people have enemies as well as the requirement to be helpful to people. Once the conspiracy theorists have eliminated the idea that real enemies from another country did this, they can go right back to business-as-usual. They need only acknowledge the enemies they are comfortable with: business owners, the CIA, right-wing politicians, whatever. It's a little cocoon of beliefs, and the difficulties of the real world don't penetrate.

In a similar manner, we have some women around here who like to get arrested at Vermont Yankee. A letter in True North Reports describes these women's activities during the flooding. I recommend reading the letter.
On Tuesday August 30, first responders were busy with scenes like this in nearby Brattleboro, or scenes like this fly-over, further north in Rutland. On August 30, these women marched into Vermont Yankee, chained a gate, and refused to unlock it or go away peacefully. Several policemen had to take time from rescuing people to cut the chain and arrest the women. These women had their comfortable enemies and their comfortable activities, and the suffering of other people during the storm didn't appear to matter to them.
I think they have a mindset similar to that of conspiracy theory people. Conspiracy theorists tend to look down on the rest of us as as "not understanding" reality, "being fooled" by conspiracies. I think they cannot bend their minds and emotions to living in a complex world that contains enemies and floods and heroism and the requirement to be kind. By indulging in conspiracy theories, they feel they can choose their enemies, and they stay in their comfort zone.
Today is a Day to Acknowledge Reality
I think that today is a day to acknowledge reality, not conspiracies. To understand that reality includes enemies, enemies not picked-and-chosen. Reality includes huge, deep sadness. Huge. As big as the hole at Ground Zero, and bigger. For me, reality includes the memory of the pervasive smell of decay and smouldering fires that lingered in New York for weeks.
Huge, deep sadness.
First responders saved many lives in Vermont. First responders died trying to save lives in New York.
In a small return for the suffering, reality also gives us heroes.
------------------
Verse from the Rubaiyiat of Omar Khayyam
Handcuff image from Wikipedia
New Yorker cover from New Yorker website. This is a web story about ten years of New Yorker covers on September 11, and well worth reviewing.
Posted by Meredith Angwin at 12:22 PM

The official 911 story is one of the most improbable of all the conspiracy theories That 15 Saudi students who had never flown an airplane could destroy 3 giant office towers using airplanes would be rejected as a plot line by Tom Clancy. It would be too unbelievable even for his readers.

That American/fascists used to it as an excuse to invade Iraq something they always wanted to do increasing the price of oil 500% just when Uncle Saddam had received UN permission to open his oil taps again, makes the official conspiracy theory seem doubly suspicious to those inclined to the "follow the money" philosophy.

Given that Big Oil money is paying for the current mainstream media and Big Green anti nuclear campaign in Vermont and around the world, I'm surprised that you aren't at least a teeny tiny bit suspicious of a possible role in 911.

I disagree with almost every one of your statements, but let's take the first one about the Saudi students could not do it. My son-in-law is a professor of mechanical engineering at Columbia. Within about an hour of the towers falling, he had done a back-of-the-envelope calcluation on the temperatures caused by a full load of jet fuel, the temperatures that would cause the beginning of the collapse, and the pancaking effect of the start of the collapse. In other words, it wasn't unbelievable to him, it was a simple calculation. One that could be done by a student, say, in another country.

I came pretty close to throwing your comment in the bit bucket from your statement about American fascists. Just so you know.

Why didn't the police remove those ladies from the chained gate at Vermont Yankee, rechain them comfortably 50 yards further down the fence, and let them soak up some rays?

I strongly disagree with Seth's interpretation, but there is a tiny sliver of logic in some of his thought processes.

The idea that 911 was an inside job cooked up by shadowy forces in the US government or intelligence establishment is ludicrous, but it is not so ludicrous to recognize that some of our enemies sell vast quantities of oil and natural gas into the world market and have entire economies that are tightly linked to the price of those vital commodities.

No one who carefully observes the behavior of the oil and gas market can fail to understand that instability and war nearly always lead to higher demand and higher prices - thus more profits for the suppliers.

I am not a conspiracy theorist, but I know that businesses and countries are capable of formulating and executing strategic plans that are designed to accomplish goals like increasing market share, improving margins, and pushing down competitors.

It is still wryly amusing to me that an event that dramatically showed the world the potential hazard of flying planes full of hydrocarbons over densely populated cities has resulted in tens of billions of dollars in extra costs to protect nuclear power plants just because some clever participants in the attack left some documents in a cave indicating that they thought about maybe flying into a containment dome.

The very rational decision by the attackers to find a softer target seems to have gotten lost in the FUD campaign.

My comment about the Saudi students had to do with learning to fly complex airplanes so well as to hit so precisely three needles in an aerospace haystack, all the while evading American air defenses which mysteriously were otherwise engaged that day. This long after that German kid landed his plane at the Kremlin, and years after Tom Clancy wrote a book detailing how a real veteran airline pilot could use his companies 747 to destroy the very Capital building that was on the target list. Tom would certainly reject that Saudi students directed from a cave in Afghanistan doing the same thing not once but three times plot line as too outrageous for his readers to believe.

As for the temperature, collapse theory, here we have a mechanical engineering student opining on a subject well out of his field just like many of your Vermont Yankee opponents. There are numerous civil engineering Phd's with actual expertise in this field that reject the crazy official conspiracy theory take on the building collapses particularly building 7's. I'm not saying who is right or wrong, just that it is issue under considerable academic dispute.

As for your disgust with my referring to Project for a New American Century with leading members including Vice President Dick Cheney, Defense Secretary Donald Rumsfeld, Defense Policy Board chairman Richard Perle. Deputy Defense Secretary Paul Wolfowitz as American fascists, let me refer to the greatest American president and World leader in history Franklin Delanor Roosvelt's words on the issue.

"“The liberty of a democracy is not safe if the people tolerate the growth of private power to a point where it comes stronger than their democratic state itself. That, in its essence, is fascism - ownership of government by an individual, by a group,”

Sure sounds like the Project for a New American Century whose often quoted remarks involve looking for a second "Pearl Harbor" to justify their agenda.

The problem with pronuclear types is you play softball, while our Big Oil enemies play bloody dirty hardball. Giving we are losing badly, perhaps a change in tactics?

Seth. Many things going on and no time for a long reply (which wouldn't convince you anyway). So, just two notes:

1) My son-in-law is a professor of mechanical engineering at Columbia, not a student. I SAID THAT in my post. I said that he did the calculation. I also said a student could also (probably) do the same calculations, but I totally resent the comment about "some student" calculated. Oh yeah. My son-in-law has a Ph.D. He has grad students that get Ph.D.s under his tutelage. He has post-docs that continue their education under...enough. I think you get it.

@Seth - do you really consider the World Trade Center towers and the Pentagon to be "needles in the aerospace haystack?" I cannot think of three easier targets to find, especially on a clear day.

Though I share a small portion of your opinion of the chicken hawks like Cheney and Wolfowitz, please rethink your opinion of the professional men and women who serve in the armed forces and in the intelligence services. You have to be kind of nutty to imagine that they would knowingly participate in the kind of scheme that you are implying.

America was not maintaining any active "air defenses" at the time of the attacks - especially against commercial aircraft and especially near major cities. It is, again, only people who are gullible who believe there is proof of conspiracy in the absence of any planes being shot down. There was nothing that could or would shoot them down at that time.

Finally, I worked in DC supporting offices in the Pentagon with network services at the time of the attack. I knew dozens of people who heard and saw the airplane and others who picked up the pieces. I had friends who crawled out of the building and even knew people who looked out of their E ring offices to see the nose of the plane just before it hit nearby.

The conspiracy theorists deny that it was an airplane that destroyed a wing of the Pentagon. They are, quite simply, dead wrong.

All that said, there is some element of truth in your concerns about the fact that there is way too much involvement in our federal government by corporations that profit directly from defense and homeland security expenditures. We have given up far too many freedoms based on the false notion that there are terrorists everywhere and the notion that our government's primary job is to protect our safety.

In the country that I volunteered to serve for 33 years, the primary job of government is to protect liberty and improve the common good. Scanners, barriers, and screeners do not improve our lives and do not protect us from actual harm.