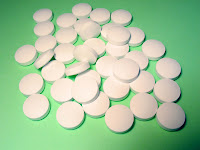 "Iodine Pills" at Brattleboro High School
On Saturday April 14, there was a rally against Vermont Yankee in downtown Brattleboro.  AP had a story about it which was widely reprinted. Among other places, the story appeared in the Burlington Free Press.  The article was titled Vermont Yankee protest draws quadruple-digit crowd.

The AP story included this astounding statement:
Putney resident Nancy Olsen, 65, a teacher, said she stumbled upon the rally and stopped to see what people had to say. Overall, she said, she has mixed feelings about the plant remaining open.


“When the school distributed iodine pills to the teachers it was a little bit of a shock, because I hadn’t really thought about it that much,” she said, referring to the pills that were handed out at Brattleboro Union High School during last year’s tritium leak to counteract the radiation poisoning.


What-what-what-what?? ( That was my reaction.)  Pills were handed out at Brattleboro High School?  Only to the teachers?  KI for tritium? "The radiation poisoning?" And the tritium leak was 2010, not last year, though that seems a rather trivial point, considering everything else.

After I read this, I called Brattleboro Union High School to find out more about it.  Olsen is a teacher at the high school, and they offered to connect me to her.  However, I figured I already knew what she had said, and did not ask to be connected.  I wanted to know if and when such pills were distributed: therefore, I wanted to speak to the principal.

I spoke to people, but I didn't do a very good investigation. I am not blaming anyone for not resolving the issue.  Everybody was very nice. Everybody also seemed very eager to refer me to someone else to talk to. Before I was done, I had spoken with someone in the prinicipal's office, someone in the school district office, and one of the school nurses. I was also encouraged to speak to the Vermont Department of Health, but I didn't follow up.  In general, the people I spoke to didn't know about any KI distribution, but nobody said: "It certainly did NOT happen."

I folded my mini-investigation. Before I folded, I spoke to some Brattleboro friends about my adventures. I have no idea if my friends followed up the investigation.

BRATTLEBORO, Vt. (AP) — In a story about the Vermont Yankee nuclear power plant, The Associated Press erroneously reported several details about a tritium leak from the plant. The tritium did not cause radiation poisoning and posed no harm to the public, according to state health officials. The leak took place over a couple of months in late 2009 and early 2010, not last year. Also, the Vermont Health Department distributes potassium iodide — not iodine— pills in case of a leak of a different type of radiation and did not distribute pills for the tritium leak.

It was good to see this correction.

My own coverage of the rally is in two parts: Three Views of the April 14 Rally, and We start with Vermont Yankee.  Later, we shut down capitalism.

It is gossip if you just repeat something that is not true. Not knowing if something is true is not excuse.

Local writers in areas with nuke plants tend to be accurate about nuclear power because they get corrected quickly by well informed local people.

I have a hobby of detecting gossip or even worse, the carefully crafted lie. One example was a carefully crafted lie about the US policy and practice for handling high level waste spread by the AP. I stopped counting at more than a couple of dozen local newspapers that printed the story. The sad part is that errors in describing US geography would be identified by a competent grade school student. My Google found the source. The China Daily News!

Not everything from China Daily News or Pravda is communist propaganda. I bet like all newspapers, they get the local sports right. I think journalist can get their facts right when it is really important to local readers.

So good job Meredith. Calling a school and asking questions is effect. The reason is teachers are responsible professionals who can be help accountable.

Naw for AP's alligator tears "apology/correction" for slinging more FUD staining nuclear energy -- as intended, walking away from hit and run whistling. If they're honest and sincere and _balanced_, how about some POSITIVE articles about nukes for once, as they generously do for wind and solar and algae!

Thank you both for your comments!

I did one thing more. I don't get the Burlington Free Press: I read it on-line. So I wasn't sure they had printed the retraction. I might well miss a "correction" in my on-line reading. I emailed them and they got back to me and said they had printed it. I was pretty sure they would do so, but I wanted to be really really sure.