A Gaz Metro Catch-Up: Whose Money Is It?

I wrote a blog post called A Modest Proposal suggesting that perhaps the utility merger in Vermont could use shareholder money as a weatherization account from which Vermonters can borrow. Then, they could give ratepayer money back to the ratepayers.
You see, CVPS was supposed to give $21 million back to the ratepayers if the company were acquired, but both CVPS and Gaz Metro think it would be more fun to have the money themselves.
A lot of people are upset about Gaz Metro keeping Vermont ratepayer money. The Department of Public Service (DPS) is not upset. DPS is supposed to be the consumer watchdog for Vermont, but they aren't watching very hard.
----------
A series of comments about the merger.
Looks like GMP decides when they've given enough money back, and then GMP takes the rest.
Vermont Representative Oliver Olsen on Have We Got a Deal for You in Vermont Tiger:
....Try following the pea in this shell game. Instead of providing a direct cash refund or using the windfall to reduce rates, the utility plans to invest in a variety of projects that will produce broad societal "benefits", which include intangibles like "reduced supply risk" and "emission reductions".... Gaz Metro will declare "mission accomplished" when $25 million of "benefits" have been tallied, and will quietly slip out the back door with $21 million in cash.
From balance sheet liability to balance sheet asset for GMP. So easy!
Patty Komline, Vermont Representative, in Vermont Tiger Give the Money Back:
...Last Friday I was a guest on VPR’s Vermont Edition with [Mary Powell] the CEO of Green Mountain Power. The people who called in overwhelming supported a simple payback. Ms. Powell was asked if the proposed merger deal turned the $21 million from a liability to an asset on their balance sheets. While reluctant to answer, Ms. Powell was clear; yes.
However, the Public Service Board May Still Do the Right Thing
Happily, it looks like the Public Service Board isn't convinced by the utility arguments on how the utilities themselves
should be keeping the money.
Gaz Metro to recover CVPS acquisition through ratepayer savings
by Alan Panebaker
at Vermont Digger.
....The Vermont Public Service Board has never before allowed a utility to recover an acquisition “premium” from merger savings that would ordinarily be passed on to consumers. If the three-member panel approves the arrangement, it would set new precedent, according to documents from the proceeding...[but] This deal is different, company [Green Mountain Power] officials say: It is historic in nature because of its size and the potential benefits it offers for customers. (Blogger comment: Really? It's different? Because the merger is bigger and there's more money on the table? The laws and precedents change if there's more money at stake?)
Maybe The Money Will Come Back to the Ratepayers
Despite the lack of interest of the Department of Public Service in protecting the ratepayers, the Public Service Board may do the right thing. They may insist that the ratepayer money returns to the ratepayers. I surely hope so.
I conclude with another quote from Have We Got a Deal for You, by Oliver Oleson
Governor Shumlin has done a good job advocating for the utilities. But under Vermont law, the Governor’s administration is charged with representing the interests of Vermont ratepayers before the PSB. They should start doing that. 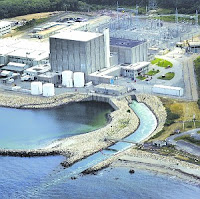 Update:
Howard Shaffer's post on his debate with Gundersen about the Pilgrim plant is posted today at ANS Nuclear Cafe. You can view it here: The Nuclear Debate on the Road.
Posted by Meredith Angwin at 1:00 PM