Links for registering for the meeting:

Update: Many people were frustrated because the links in the graphic above do not work.  I had working links available, but they were at the bottom of the post.  I am moving them to the top of the post in this update.

Note: if you have trouble registering,  I suggest you email Weezie Nuara.  Please register in advance because ISO-NE provides a lunch, and they need a headcount.

Now, back to writing about the meeting itself!

The Consumer Liaison Group (CLG) of ISO-NE holds a public meeting every quarter. On September 7, a little less than two weeks from now, the meeting will be in Vermont. (I am on the Coordinating Committee for CLG.)

I hope you can attend. The meeting is free, and includes a lunch. The CLG is the "consumer's voice" for ISO-NE, and this will be a very special meeting.

Governor Scott will speak. He almost certainly will not speak about nuclear power, but I will never forget that he was one of four Vermont senators who voted in favor of continued operation of Vermont Yankee. You can see a short video of his statement at the time of the vote: it's on my blog post Hello Governor Scott, and Goodbye Shumlin.

The main part of this meeting will be a discussion of FERC Order 1000. This order could lead to huge and expensive changes on the grid, and almost nobody knows about it. The basic idea of FERC 1000 is that grid operator (ISO-NE, for example) can order states to pay for transmission lines that are needed for "policy" not just "reliability."

With FERC 1000, if a transmission line is needed for "policy," the grid operator can also force the states to share the cost of the transmission line. Say that a state has a policy of bringing in wind power from a neighboring state. That state can now commandeer all the states in the grid to pay for the new line. The line is state "policy," after all. Actually, the grid operator would do the commandeering, but the idea is the same.

In Vermont on September 7, many knowledgeable people will be discussing FERC 1000 in public.  This is a rare and important event.

I have more about FERC 1000 in this blog post from earlier this year. That post is somewhat out of date, since New England States Committee on Electricity (NESCOE)  recently lost their FERC 1000 lawsuit against FERC. A representative from NESCOE will speak at the upcoming meeting.


Posted by Meredith Angwin at 3:05 PM No comments: 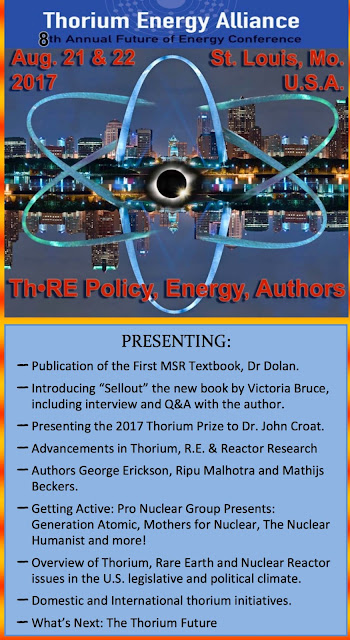 The Thorium Energy Alliance will take place in St. Louis starting this weekend.  I signed up to attend long ago, but people are still joining right now.  Here's the link to the website.   I encourage you to attend if you can!

Much of the conference will be about molten salt reactors, of course.  But there will be much more! More than two hours of how-to-do-advocacy workshops, led by leading advocates such as Eric Meyer of Generation Atomic and Heather Matteson of Mothers for Nuclear. (I will be a co-leader in one of the sessions.) There will be great talks by many authors. One of the featured talks is by Victoria Bruce, and people who register for the meeting will get her latest book, free with their registration.  Sellout: How Washington Gave Away America's Technological Soul, and One Man's Fight to Bring it Home.  Mathijs Becker will be a speaker.  He will be here from the Netherlands. He is the author of one of the few books debunking Jacobson's "100% renewables" claims (The Non-Solutions Project) as well as posting an excellent youtube channel, the Nuclear Humanist.

It will be a great conference.  But why should you come?

A Conference that is truly  for the "Rest of Us"

I have been to many pro-nuclear conferences, and I love them all.  Most of the conferences are sponsored by an industry group.

Sometimes, these conferences don't feel very welcoming to people who are not in the industry.  This conference feels very different.  Some of the speakers are from industry (EPRI advanced reactor group), and some are from industry start-ups (ThorCon, Elysium, Terrestrial and others). However, many speakers and attendees are "just" nuclear advocates. They are people who have never worked in the nuclear industry, but have a presence in the world of advocacy, ideas and books engaged with new versions of nuclear power.

The "just advocates" are the most important people at the conference, in my opinion.  They are the group that can reach out to other groups, and to their neighbors.

This is a very welcoming conference. I encourage you to attend.

Note: if you are defending an existing nuclear plant, you will be right at home.  You don't have to be a molten salt maven to get a lot out of this conference. For example, I could annotate the list of speakers, giving examples of the important and brave things various speakers have done in defense of our current fleet of reactors.  Look at the bottom of the conference page for the list of speakers.

Another note: The conference will include a break for Eclipse Viewing.  How many conferences are planned around something like that?

This will be a great conference.  I hope to see some of you there.   Here's the conference link, again:

Update: Not WARNing at V.C. Summer

SCEG withdrew its original petition to abandon the Summer Project, but this was only to facilitate government review of the petition.  After withdrawing the petition,  SCANA held a press conference and re-iterated its plans to abandonn the nuclear project.

Meanwhile, knowledgeable people have emailed me that the construction workers at Summer are probably not covered by WARN, but employees of Westinghouse and Fluor probably are covered.  I am not a lawyer, and I am merely repeating what they said.  It is probably true, however.

None of this is good news for the project or the workers.


The Stop-Work at Summer

At the V.C. Summer construction site in South Carolina, a stop-work order was issued by the plant owners. Within hours, thousands of people had to turn in their badges and leave. There is simply no way to sugar-coat this story.

Actually, there are at least two stories here: the first story is about why V.C. Summer was cancelled. That story has been widely discussed.  The second story is about how the  layoffs happened, and their legality (or not).  This story has not been covered very much. It will be covered here.

At the end of this post, I have an annotated list of resources  about the first topic, why Summer was cancelled.

On Facebook, one friend wrote about how difficult the Summer closure was for his family.  I will not quote his statements here, but his post made me feel very sad for all the hard-working people at Summer.  I mean I was feeling bad already, but his post made me feel worse. The cancellation of Summer had a huge human cost. You can't lay off 5600 people without immense pain, and immense ripples in the community.

It is too mild to say that the layoffs themselves were not handled well.  In my opinion, the way the layoffs were handled was certainly immoral, and may have been illegal.  In this article, Fired nuclear construction workers crash State House, workers said they had "no warning from superiors before being let go about lunchtime Monday." In a video at WLTX, workers said "We met at our lunch location and they read these letters to us...."

It's impossible to get numbers, but most sources say 5000 people were affected by the equivalent of letters-read-at-the-lunch break.  In the video above, a worker says that he has never heard of so many people being laid off at one time.

My first reaction was that I thought that such a layoff was simply illegal.  A federal law, the WARN act, requires employers to give advance notice of large layoffs. Nolo.com has good article on the WARN act and South Carolina. (Nolo sells consumer-oriented legal books and software.)

WARN and the big boys

WARN covers employers who have at least 100 full-time-equivalent employees.  If 50 or more employees are laid off at one job site, WARN requires sixty days notice. (You can read the fine print at Nolo.com)

On Facebook, I said that I thought the short warning of this layoff was probably illegal. One person commented that I was making unwarranted assumptions.  In his opinion, a big employer would read the laws and obey them. Okay.  Basically, he was right about the biggest of the big boys on the job site: SCEG. According to this video and article from WISTV, SCEG notified the state of 615 layoffs at Summer (layoffs of their own employees), giving the requisite 60 days notice according to the WARN requirements.

SCEG covered its own employees, but employees of large and small subcontractors seem to be subject to the largest sudden layoff that I have ever heard about.

Westinghouse, with hundreds of employees on this project, is one of the big boys. Nevertheless, it seems to have issued as quick a lay-off notice as might have been issued by any local supplier of portapotties. Westinghouse is now being sued.  I suspect that many of the other contractors may also be sued.

Opening Gambit or Closing the Door?

Why did the layoff happen in this sudden way?  It saved some money for SCEG, until they get sued, of course. It devastated towns and businesses and gave locals a pretty grim idea of what their utilities think about their welfare. Looking at a project that is over budget by billions of dollars, I don't think saving two months worth of salaries was the entire motivation. Decades of bad feelings are likely to arise from the sudden layoffs, and two months payroll was saved? To me, it doesn't make sense.

That is just my opinion, of course, but there it is.  Sometimes, dramatic events are the opening moves in fierce negotiations.  "Now that I have  your attention...."

Sometimes, of course, dramatic statements are the closing moves: "Look, I mean it, and nothing you can do will change my mind." However, that sort of statement often comes after a long fruitless negotiation.  Not always, but usually.

If this were a chess game, I would say: This is more likely to be an opening gambit than a closing statement.

But wait, V.C. Summer is not a chess game!  In a chess game, the pawns are little pieces of plastic or wood or ivory.

I recommend three excellent blog posts on the reasons for the project cancellation.

In 2016, Will Davis wrote at ANS Nuclear Cafe: Nuclear Plant Costs-- A Look Back and Ahead
This post describes the cascading effects of various types of cost overruns, including changes to the specifications, delays, and incomplete planning.

On July 31, 2017, Dan Yurman at Neutron Bytes wrote Utilities Pull the Plug on AP1000s at V.C. Summer.  He looks at the cost overruns, but also notes that Santee Cooper refused to go along with a plan to complete just one of the reactors.

On August 1, 2017, Rod Adams wrote: Tragic day in South Carolina as 5,000 people lost their jobs at VC Summer. Rod's post concentrates on design changes, specifically the Aircraft Impact Assessment Change.  There are 120 comments on that post.  Many of these comments are from very knowledgeable people.