Electrification of the Heating Sector: CLG meeting in September

The purpose of the Consumer Liaison Group (CLG) is to be the voice of the electricity consumer in advising the grid operator, ISO-NE. (I am on the Coordinating Committee for the CLG.)

The next meeting of the Consumer Liaison Group will be Thursday, September 20,  in Windsor Locks, Connecticut. The topic is Electrification of the Heating Sector. 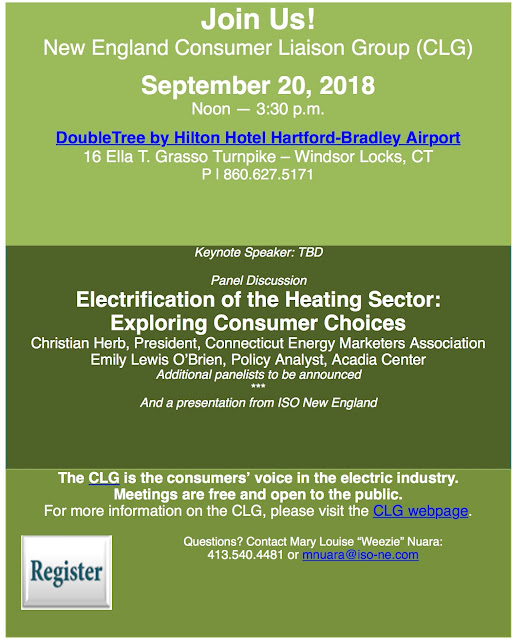 By Guy Page
AUGUST 13, 2018 - Maybe the timing was just co-incidence. But today, on the eve of the 15th anniversary of the August 14, 2003 Big Blackout that put 50 million North Americans in the dark, Gov. Phil Scott and four other New England governors announced plans to prevent crippling power blackouts.

The 2003 outage blacked out an estimated 50 million people and 61,800 megawatts (MW) of electric load in eight northeastern states, including parts of southern Vermont, and Ontario.


“The New England states and ISO New England have recognized the challenge of increasing reliance on natural gas-fired generation during cold periods when the region’s natural gas is used primarily for heating. These concerns have been heightened as non-natural gas-fired generation resources, such as nuclear, coal, and oil, have retired in recent years. During recent winters, ISO-NE has been relying on more expensive, carbon-intensive oil-fired units to ensure sufficient generation to meet hour-by-hour demands on our energy system.”

The governors in particular praised the low-carbon, energy security value of nuclear power:
“Effective next June, the region will have two nuclear power plants that represent approximately 3,500 MW of baseload energy that is not dependent on natural gas infrastructure and also helps to meet emission goals. ….It is important to continue to evaluate cost-effective policies that properly value existing clean energy resources which have significant fuel security implications.”

Proposed energy policies, to be adopted state-by-state, could include:


For those of us who may have forgotten the 8/14/2003 Big Blackout, or vaguely remember seeing news coverage on our (electric) television sets – power was not restored for 4 days in some parts of the United States, according to the official EPA final report April, 2004. According to August 13 2013, ISO Newswire, New England was largely spared from the effects of the outage because protective equipment installed on the transmission system sensed the disturbance and automatically closed the ‘electricity border’ with New York, splitting New England away from the collapsing power system to the west.

But that’s history. New England’s governors have taken the important first step of acknowledging a serious, life-threatening problem exists. Whether they can prevent another Big Blackout is a question for historians of the future.

---------
Guy Page, a frequent guest blogger at this site, published this in his newsletter: State House Headliners.

Posted by Meredith Angwin at 6:45 PM No comments: