More Cold and More Oil on the New England Grid

Once again, I will tell this blog in a series of pictures.

In my blog of December 27, I showed a snapshot of the New England grid in the early evening.  The temperature at my location was 7 degrees, the local marginal prices (LMP) on the grid were running around $200 MWh (20 cents per kWh), oil was 22% of the fuel mix, renewables were 11% of the fuel mix (I remarked that this was on the high side for renewables) and the high renewable percentage was due to the wind energy.  Wind was 50% of the renewables.  The blog post was Successful encouragement of oil on the New England Grid.  The source of all the information (except the local weather) was the ISO-NE web page, ISOExpress.

That post was on December 27.  Yesterday, December 28, I noted that the percentage of oil had gone up above 30%, and the portion of renewables had gone down.  But I didn't write another blog post. My snapshot is below. (Double click on any graphic to enlarge it.)

Getting Colder, and Oil Use Stays High

Today, around 1 pm, the temperature was 1 degree, as show below. The weather had gotten colder.

The price of power on the grid had also gotten higher, around $300/ MWh (30 cents per kWh)

Though I must admit that as I write this at 3 p.m, the price has fallen again to around $200/ MWh.  Also, note the color codes on the map.  The colors show the prices graphically.  Closer to red is higher priced.


Not as much wind on the grid

What about the renewables?  On December 27, a windy day, renewables were at 11% of the grid, and wind was 50% of renewables.  (See my December 27 post for the graphics on this.)

Today, at one pm, not so much wind.  It was actually snowing rather gently.  At that time, renewables were only 7% of the grid power, and wind was only 13% of renewables.

I think oil use will remain high until the cold weather is over, about a week from now.   The wind may spring up again in the evenings, or it may not.  Whichever it chooses.  Nobody controls the wind.  So renewables may continue at 7% or go up to 11% again.

On the other hand, we haven't really hit peak demand yet.  Here's a screen shot that I just took. This is the ISO-NE estimate of system loads today, and the actual loads up until 3 p.m.
As you can tell in this chart, around 18 hours (6pm) looks like peak demand.  Check in and see if the percentage of oil goes up even further.  I'm going to check.  I'm curious.

Here's the link for these real time updates from ISO-NE, ISO Express. https://www.iso-ne.com/isoexpress/

Meanwhile, I will check back at about the grid at 6 p.m. but I won't be posting. I leave the evening results as "an exercise to the reader."
Posted by Meredith Angwin at 3:47 PM No comments:

Successful encouragement of oil on the New England Grid.

Cold in New England, and Going to Stay Cold

I decided to tell this blog as a series of pictures.

I will start with a screen shot that I took of the weather report, at about 5:30 this evening. (Note that "Hartford" refers to the town of Hartford Vermont, where I live.)  It was 7 degrees F at that time, with a drop to minus 16 expected tonight.  The next few days are expected to have single digit high temperatures and minus temperatures of two digits (minus 10, etc)

So, how is the grid doing? Fairly well, actually.  At 5:30, I took this picture, showing that the LMP (local marginal prices) were running at about 20 cents a kWh. ($200 a MWh translates to 20 cents per kWh.) The graphics below are screen shots from ISO-NE. I took my snaps at 5:30 at this ISO page, which is updated every 5 minutes. https://www.iso-ne.com/isoexpress/

During cold snaps, gas pipelines must supply homes first, and gas-fired power plants get short-changed.  ISO-NE has a Winter Reliability Program which mainly compensates gas-fired power plants for keeping fuel on site: oil or LNG or CNG. (Liquefied or compressed natural gas.) The grid was running about 22% oil at 5:30 this evening.

The current Winter Reliability program is described in an update presentation, given December 7,  2017  by Anne George of ISO-NE. On page 5, Ms. George describes the current winter reliability program, which pays oil and gas fired generators to have fuel on site.  (Page numbers are at the lower right of each viewgraph.) On page 18, she describes how the forward capacity auctions are attracting new generation, even as older plants retire.  Specifically, ISO-NE is attracting new dual-fired natural gas resources: gas turbines that can also burn oil, and therefore can store oil on-site for cold weather.

ISO-NE's attempt to provide winter electricity by encouraging oil use in cold weather is working.  The next picture shows (among other things) the fuel mix at 5:30 on the New England Grid.

You can see that 25% of the electricity was supplied by nuclear, 24% by natural gas, 22% by oil, and 11% by renewables.  Usually, the grid runs closer to 50% natural gas and just a few percent oil. If you go to viewgraph 19 of the ISO-NE presentation,  you can see that natural gas is expected to be 55% of normal generation, and oil is the merest sliver on the graph.

In the chart above, renewables are making 11% of the power on the grid.  This is on the high side. (Viewgraph 19 of the ISO presentation shows renewables making 5%, for example.)  The high contribution of renewables is due to the wind.

In my experience of New England, really cold weather is often deathly still.  Not this time.  The wind is blowing, the windchill factor is serious, and the wind turbines are making considerable amounts of energy.  Wind turbines are making 50%  of the renewable power on the grid, as you can see in the chart below.  Basically, the other 50% of the renewable power is being made by burning wood and refuse. That power is pretty steady: the wind contribution goes up and down.

The chart below shows the percentage of renewables on the grid at 5:30 p.m.

The End of the Grid Tour

I am pleased that it is both cold and windy. (Actually, I am not that pleased about it. I have to live here, after all.)  I also know ISO must be fuel-neutral, so dual-fuel gas-fired generators are considered good. However, I can't help but think that using more oil in the winter is a step back for New England, not  a step forward.

If you want, you can go to the ISO site, and watch the grid.  Or if you don't live in New England, look up your own grid, and do a compare-and-contrast. I would love it if you would comment on this article.

(An article from about four years ago in similar weather: The Cold Truth on the New England Grid.) 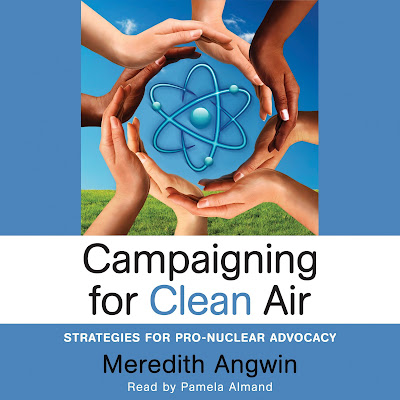 Audiobook of Campaigning for Clean Air is now available!

I am so pleased to announce that the audiobook version of Campaigning for Clean Air is now available at Amazon. You can buy it or you can rent it (so to speak) through Audible.  You can give it as a gift through Audible. It should be available at other vendors also, but I haven't checked them out yet.

Audiobook of Campaigning for Clean Air

I was so happy that Pamela Almand agreed to read this book. She is a former pilot for Northwest Airlines: she flew 747s, often to Japan.  People told her that her voice was reassuring to the passengers.  Her voice is smooth, low-pitched and easy to understand.

I listened to quite a few examples before I decided that I wanted Almand to read my book.  She has the right voice quality and a strong technical background. But I wondered if she would narrate my book. My book can be seen as controversial: not everyone wants to narrate something about nuclear power. Almand has many projects from which to choose. To my relief, Almand liked Campaigning for Clean Air, and she narrated it!

You will really enjoy Almand's narration of Campaigning for Clean Air.  Like all audiobooks (and podcasts, etc.) you can "read it" in periods of time that might otherwise be wasted.  This is because you will be listening to it, not reading it.

I am happy that it is available, and I hope you enjoy it!

Posted by Meredith Angwin at 7:56 PM No comments: