Yeah, yeah, we know that.  But I was still surprised to see a story by Mike Faher breaking on Christmas Day this year. Here's the article in VTDigger December 26,  Shumlin: Vermont Better Off Without Nuclear Plant.  Two years after the plant closed, and Shumlin is still crowing about closing it?  This is what Shumlin wants to say, just before he exits from being Governor?

From the article above, some quotes from Shumlin.

Furthermore, Vermont is "an example of how to reduce your carbon footprint and do electric generation right."

Here's my opinion of the real meaning of his statements:
A Sad Anniversary

Yesterday was the second anniversary of the day that the plant went off-line forever,  December 29 2014.  My Facebook news feed includes many people sharing unhappy memories of the day. I did not enjoy reading Shumlin's cheerful words on Christmas Day as the anniversary approached.

I also encourage people to read my article about the consequences of the closing: Circles of Pain around Vermont Yankee Closing.

Goodbye to the Old Year

A major blessing of the New Year is that Vermont's new Governor will be Governor Phil Scott.  I first heard of Phil Scott in 2010.  When Shumlin led the charge against Vermont Yankee in the Vermont Senate in 2010, then-Senator Scott was one of the four senators that voted to support the plant.  Twenty-six senators voted against, four voted for the plant.  Scott's vote was a profile in courage.  He urged the Senate to gather more information, and not just blindly charge to close the plant.

Here's the video of his remarks.


Governor Scott and A Party

And now, Scott will be Governor of Vermont!  Assuming the roads are clear, my husband and I are going to Governor Scott's inaugural ball next weekend. I don't  go to balls  and galas on a regular basis. However, until yesterday's deadline, anyone could buy a ticket.

In fairness to soon-to-be ex-Governor Shumlin, you could also buy a ticket to Shumlin's inaugural ball at the Sugarbush Ski Resort. Mary Powell, CEO of Green Mountain Power, was a major fundraiser for that ball.  I believe the ball was rather lavish.  Here's an older article that I wrote about the close ties between Shumlin and Green Mountain Power.  And here's an article in which Shay Totten wonders if it was just coincidence that Mary Powell raised $190,000 for the Governor's ball just before a Vermont agency needed to rule about a proposed Green Mountain Power wind farm. (Again in fairness, Shumlin's ball was a fundraiser for Vermont National Guard Charitable Foundation.)

I have a new post at my meredithangwin.com website blog.  I call that blog the Nuclear Advocacy blog, because my posts are all about advocacy, rather than general news.

My latest post is Joy and Celebration: Part of the Activist Toolkit.  Advocates saved the Illinois nuclear plants. Time to celebrate!

In many circumstances, celebrating a win might  be just, "Of course we celebrate. That just goes without saying." However, I think that nuclear advocates sometimes skip that step.  We tend to look at the work-that-lies-ahead, which is admirable.  But it is also admirable to celebrate, because it is helps us stay motivated.  "YES!  We DID this!"   That's a good feeling, and makes us want to go out and do this again!

My husband used to be a member of the Western Wheelers bicycling club, and he often rode the Sequoia Century (and part-Centuries with the kids, when the kids were younger).  He told me when that when he was bicycling up a hill, he never looked up at the top of the hill.  It always felt discouraging to look at the top.  He said: "I just keep pedaling." Good advice for everyone.

And when you get to the top, celebrate!


Posted by Meredith Angwin at 11:28 AM No comments:

Since Election Day,  the future of Vermont wind power is less certain 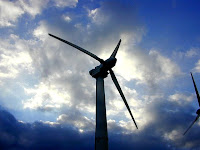 Election Day, November 8, 2016, was bleak for the future of ridgeline wind power in Vermont. The outcome of local, state and national voting signaled a vote of no confidence in the growth of utility-scale wind power in the Green Mountain State.

Local voting
Iberdrola, developers of the 24 turbine Styles Brook project, promised host towns Grafton and Windham there would be no development without voter approval by referendum. On November 8, Grafton voted 235-158 and Windham 180-101 against construction, and Iberdrola has said it will honor its commitment.

Local Vetoes a Harbinger
The Windham-Grafton vote was the latest in a line of anti-wind development referenda. Unimpressed by the 2016 Vermont Legislature’s conditional gift of slightly more say in the energy siting process, municipalities are now bypassing Montpelier. If this trend of “permission by referendum” continues, towns will have carved out a local veto power for themselves over ridgeline wind development. A new precedent is being set. This is Vermont, after all. One way or another, local people will jealously protect their control of the landscape.

State Results
During the governor’s race, candidate Phil Scott promised a moratorium on ridgeline wind development if elected governor. His opponent, Sue Minter, did not. Voters chose Scott by a nine-point margin. Minter even lost hometown Waterbury, where just 34 percent of residents (Waterbury Town Plan, page 65) support local development of utility-scale wind power. Of course, many others issues stirred voters, but the impact of the unpopularity of ridgeline development cannot be denied.

Statewide Policy
Gov. Scott is expected to keep his promise of a moratorium. He will almost certainly appoint a like-minded commissioner to lead the Department of Public Service, the state’s energy regulator. Most importantly, the term of Vermont Public Service Board Chairman James Volz expires in March 2017. Under his watch, ridgeline wind projects in Lowell, Georgia and Sheffield were approved and constructed. Governor-elect Scott’s choice to chair the PSB is anyone’s guess, but the logical choice would be a fellow ridgeline wind skeptic.

Presidential Election
President-elect Donald Trump has said wind power kills too many eagles and is an inefficient energy source, according to many media outlets. Trump also publicly called global warming a hoax and said he would restore the U.S. coal industry. In December 2015, he lost a lengthy battle to stop a wind turbine project offshore from his Scotland golf course.

National Outlook
The wind industry can be thankful that Congress extended the 2.3 cent/kilowatt-hour Production Tax Credit in 2015, even though it drops 20% every year and expires in 2019. In an impromptu interview with VTEP in Montpelier on November 22, U.S. Congressman Peter Welch said the Republicans who now control both houses of Congress “hate renewables” and that Trump supports fossil fuels. Wind power backers should not expect any new help from Congress or the new administration, he said.

This is especially likely to be true if Trump’s next Secretary of the Energy is his energy advisor, Oklahoma billionaire Harold Hamm. According to a November 19 Forbes article citing him as a leading DOE Secretary candidate, Hamm is the son of a poor sharecropper who built a trucking empire and then earned another fortune by hydrofracking oil and natural gas. Far from supporting wind subsidies, Hamm says wind should be taxed similarly to oil and gas – two percent on production in the first three years, and seven percent thereafter.

None of these local, state and national developments mean ridgeline wind has no future in Vermont. What government giveth, it taketh away, and may someday giveth back again. Thus, the next two state and federal election cycles may have different results. Still, one must wonder about the long-term sustainability of an industry that must rely not only on the ever-changing winds of nature, but also on the fickle winds of electoral politics.

Guy Page, a Berlin resident, is the Communications Director of the Vermont Energy Partnership, a coalition of Vermont individuals, trade, development and labor organizations, and businesses committed to clean, safe, affordable, reliable power in Vermont.  He is a frequent guest blogger at this blog.  His most recent post described how the Vermont Yankee decommissioning fund is supporting local schools.

Posted by Meredith Angwin at 9:39 AM 2 comments:

Part 1  of this post basically explained a few facts from historical data:
Changing times and LNG

There are new kids on the block. Seventeen  new liquid natural gas export permits granted, and an additional  29 LNG permits partially approved (Energy.Gov-August17, 2016). This has changed the dynamic of the amount and pricing of natural gas leaving the US. There's a huge difference between U.S. prices and worldwide prices.

Will changes like this continue? Will there continue to be a such price changes?

Why is this increase important?

Because as more of those 17 approved permits begin liquefying natural gas and exporting natural gas, the natural gas prices will continue to climb. More LNG (Liquid Natural Gas) produced and sold will increase the base US price for nat gas.

Natural gas producers will want to maintain their huge markups in the world. The world prices for nat gas, begin at the $17.50/MMBtu. Our prices here in the US are at $3.00/MMBtu, or an almost 600% markup value for natural gas. Huge profits from exporting gas from in the US.

So now we clearly see why production of new wells and output has increased for the following 2 reasons.

So Cheniere was the first test, with just their first unit out of 6 units.  Their first unit caused a gas price increase of 75% increase in 8 months. Now the market has balanced. But it will not be balanced for long!

The LNG exporters will need over 25 times the amount of nat gas and what we will see are nat gas prices following each new LNG exporter when they come online.

By the end of 2016, Cheniere’s Sabine Pass Trains 1 & 2 will be in operation.  In 2017, another three trains will probably start, some from Cheniere and others from Dominion’s Cove Point. By the end of 2018, five more new trains* may come online from Cameron, Freeport and Corpus Christi. Another four trains are due online in 2019 from Freeport, Corpus Christi and Sabine Pass. US LNG exports have only just begun.

We will see the nat gas prices rising in 2017. By the end of 2017, that $4.75/MMBtu price will be reached and every nuclear plant will again be competitive.

* A natural gas liquefaction facility consists of separate units, called "trains," each of which is set up to purify and condense natural gas.  So a facility can have one train or several.  Cheniere will have six trains.

Posted by Meredith Angwin at 5:32 PM No comments: