I wrote recently about The Game of Peaks. This game is a business move, not a moral imperative.

Utilities pay a percentage of overall grid costs based on the percentage of power they use during the high-usage peak hour on the grid. Lowering their usage at that time can save significant amounts of money for the utility.

Note that "beating the peak" saves money for one utility, but the fixed costs of the grid remain the same.  If one utility beats the peak, another utility will pay more for the fixed costs of the grid. Beating the Peak has little to do with conservation, a clean grid, etc.  We are talking about cost shifting from one business to another.  It irritates me when utilities wrap themselves in "do-good" rhetoric about this cost shift plan.

I plan a series of posts about Vermont utilities and their various strategies for Beating the Peak.  I start today with the biggest utility (Green Mountain Power) which has the most high-tech strategy (batteries).

Green Mountain Power: We Have the Batteries

In an article in 2016, Green Mountain Power claims to have used batteries to reduce its peak power demand and save its customers $200,000 in an hour. We know that Green Mountain Power plans to use batteries to shave the peak this year, also, as described in their recent press release: During Hot Weather GMP Leveraging Stored Energy to Drive Down Peak Power Demand and Lower Costs for Customers  In the press release, GMP describes the use of solar power and batteries in terms of 5,000 homes powered by battery during the peak, and that GMP's power sources are 90% carbon free.

The battery story is a bit more complicated, actually. The press release above claims that Vermonters have installed nearly 500 Powerwall batteries in their homes...GMP can share access to stored energy to pull down power demand at key times... and drive down costs for all customers.

Actually, Green Mountain Power is not deploying its Tesla battery units as fast as it had hoped to do so.  Electrek reported in April that only 200 home Powerwalls had been installed out of 2000 that GMP planned to install. However, the article said that the utility was making some "big deals" (with commercial customers?) that would lead to more deployment.

If there were 200 batteries in April and 500 now, the pace of installation must have increased.  Here's how Electrek describes the arrangement GMP makes with its customers for Powerwalls: Under their agreement with the electric utility, homeowners who receive a Powerwall are able to use it for backup power for “$15 a month or a $1,500 one-time fee”, which is significantly less expensive the ~$7,000 cost of the device with installation, but in return, Green Mountain Power is able to access the energy in the pack to support its grid, like a virtual power plant.

UPDATE: Green Mountain Power has just claimed to have saved $500k during the recent heatwave, deploying "enough batteries to accomplish the equivalent of taking 5000 homes off the grid."  They also said they had deployed 500 Powerwall batteries.  In this case, my estimate of $1000 saved per battery (see below) would be correct.

However, as described in the article, GMP  also has solar storage facilities, access to electric vehicle chargers, and other methods of saving electricity. Because of the other methods of saving electricity, as well  the Powerwalls, my estimate of $1000 saved per battery is too high. Since there is no way for me to correct the estimate, I will stay with that estimate, but note that it is optimistic on the role of batteries.  Vermont Business Magazine: Stored energy helped GMP cave $500 K during heatwave.


Math on the Batteries

If GMP saves only $200,000 a year by beating-the-peak, it would take GMP about 27 years to make up the $5.5 million cost for the batteries.  Hopefully, they will actually save more, or perhaps they got a better deal on the batteries.

I'll look the calculation a different way, however.  In 2016, Green Mountain Power saved $200,000 a year with less than 200 batteries deployed. If GMP saves $1000 a year per battery, it will only take them 5.5 years to make up the costs of the batteries, which is a more reasonable payback time.

To answer this question, I would have to look at what they would pay for transmission without using the batteries. First, we need to know the overall grid costs for transmission.  That part is easy: ISO-NE expects to spend $700 million dollars on transmission this year.

Then comes the hard part: estimating Green Mountain Power's peak use compared to grid peak use.  I fear this would be a lot of speculation on my part. I don't know how much GMP would pay without the batteries. And by what percentage would the batteries cut demand?  Perhaps GMP could save $2 million a year on transmission costs, by using the batteries.  Perhaps they couldn't.  I will just leave the question out there.

Note: It is not clear how quickly the homeowner will make back their share ($1500) of the costs of the batteries.

My opinion of the GMP Strategy: Not very cost-effective. Not straightforward.

Rhetoric: In my opinion, GMP's rhetoric about the batteries and the peak is misleading. Their press release is full of feel-good words about the environment, and nothing about how the money is saved --the "savings" is really a transfer of grid costs to other utilities.


Posted by Meredith Angwin at 10:16 AM No comments:

Cutting back on electricity use on the hottest day of  the summer is not a moral imperative. It is merely part of The Game of Peaks. This game allows large utilities to shift costs to smaller utilities and co-operatives.

Rules for the Game of Peaks

Of course, this percentage calculation is an opportunity for utilities to shift costs elsewhere. Utilities campaign about "shaving the peak." Announcements state that "we saved hundreds of thousands of dollars by shaving the peak."  For example, in this Burlington Free Press article from 2016, Green Mountain Power claims to have used batteries to reduce its peak power demand, saving customers $200,000 in an hour.

The statement about saving $200,000 in an hour is a bit misleading.  It looks like it is about energy conservation, sparing the grid, etc.  It isn't.

That $200,000 wasn't some excess cost of electricity in that single  hour.  The savings comes from the fact that Green Mountain Power used its predictive power and its batteries to reduce its demand at the time of peak demand.  Therefore, it will  reduce the amount it pays for grid-level transmission. Somebody is still paying that $200K for transmission: the overall cost of grid transmission hasn't changed. Some other utility is paying that cost.

Saving Electricity in Summer: The Game as Played

As I wrote in an earlier post, The Not-Stressed Grid in Summer, "beating the peak" is not about

The local grid is doing well in very hot weather.

I am writing this post because utilities only seem to talk about the grid when they are pushing "beat the peak." If the peak is beaten, the peak-beating utilities save money, and the other utilities have to pay more.  It's a zero-sum game, not a moral imperative.

My voice is rather muted,  compared to utility advertising campaigns, but I felt that I must speak up. 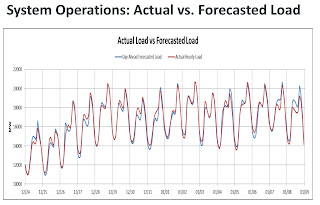 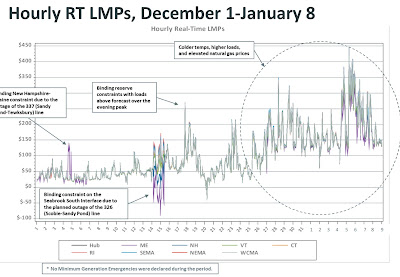 Posted by Meredith Angwin at 12:16 PM No comments: