Some Results from our Press Conference

I guess we really won't know until we see what kind of coverage we get, but I wanted to post about our Montpelier press conference yesterday. At this conference, the Coalition for Energy Solutions announced and released our evaluation of VPIRG's report on replacing Vermont Yankee with renewables.
First of all, it was a gorgeous day. Just before our conference, the Race to Replace (Vermont Yankee) took off from the Statehouse steps. These were forty Middlebury College students riding to insist upon clean, affordable, renewable energy. (Well, it works for them.) I took some pictures as the bike riders indulged in the dangerous process of eating bananas, completely careless of the radiation consequences. 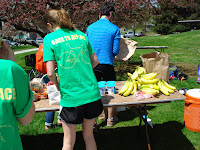 The bike ride had invited all the gubernatorial candidates to speak, and the five Democratic candidates came. I listened to them all bash Vermont Yankee. Some, like Matt Dunne, were upbeat about the challenge, and the great future Vermont would have in leading the world in renewables. (Did I mention that I know Matt's wife, Sarah Stewart Taylor? It is typical of both of them to be upbeat. I gave Matt a copy of our report.)
Other candidates, like Peter Shumlin, preferred to attack. The tritium, the aging hulk, the out-of-state owners who will not fund de-commissioning, how you need someone who will hold their feet to the fire.
Vermont Digger videotaped most of it. Here's Shumlin if you want to see him.

Meanwhile, I continue to learn how things work. Turns out that the two legislators, Senator Peg Flory and Representative Patty O'Donnell, did not introduce us at our press conference. They did not consider themselves to be sponsoring this press conference, but they were enough in favor of it to reserve the room for us. (They probably hadn't even had a chance to read the report.) If an ordinary citizen reserves the room, a legislator can "bump" the person from the room and reserve it herself. In that case, our press conference would have been sunk. We thank Representative O'Donnell for making the reservations that ensured we would be able to use the room.
The conference itself went well. All the Coalition members were there, and we all spoke, which made it run a little long. Some of the press were there, and Anne Galloway of Vermont Digger recorded part of it. (Some of the video may appear on the Digger website.) James Moore of VPIRG was also there part of the time. (Moore wrote Repowering Vermont.) He hung out in the back of the room and left early.
It was a busy day in the Statehouse, as the legislature tried to take care of the overdrawn unemployment fund, the state budget and...well...everything. The floor vote bell chimed almost constantly. We heard that other reporters would probably review our report later, when things stop hopping in Montpelier. The legislative session is supposed to close next week.
Meanwhile, the Brattleboro Reformer covered our report. As I am posting this, there are 21 comments, many positive toward the report. (And thanks to Rod and David who wrote comments.) I will keep you informed as more articles are published.
Posted by Meredith Angwin at 5:08 PM

This link has information about black carbon (soot)
http://www.aegpl.eu/Content/Default.asp?PageID=78&DocID=1031
When oil or wood burn, soot is a byproduct. The soot adds to global warming in addition to the production of CO2 by absorbing sun light (the exact opposite of snow). This study says that up to 16% of global warming may be due to soot. If Vermont burns twice as much wood to make electricity, then not only will more CO2 be created than burning uranium but the soot (and a lot of it) will warm us up too.

That is really interesting.

One of the issues of NOx control for coal is that combustion methods for NOx control tend to make more black carbon. In the coal industry, it is called L. O. I. (loss on ignition)...that is, percent of carbon in the fly ash, measured by weight loss on heating (igniting) the fly ash. LOI goes up as you burn rich in part of the boiler, in order prevent NOx formation.