In the previous post, I wrote about eugenics in general and how the Grannie's handout expressed the eugenics worldview. In my opinion, the post was not specific enough in some areas.
This post includes more detail about two topics:
1) Alice Stewart herself: who she was and what she did
2) Why people in Vermont should be particularly concerned with avoiding support of the eugenics agenda.
The topics fill in the gaps of my previous post. I do not mean to imply that Stewart directly practiced eugenics in Vermont.
Alice Stewart
Alice Stewart is the author of the eugenics material handed out by the anti-nuclear grannies at a recent Public Service Board (PSB) meeting. I described this in a post about anti-nuclear activists and eugenics.
A little about Alice Stewart. She was born in 1906, and Stewart's biography in Wikipedia tells us that she was a physician who studied the effects of radiation. She started off by doing good things: for example, her work encouraged pregnant women to avoid x-rays. As I read it, later in her life she began to allow ideology to dominate her science. She apparently allowed a co-worker to fudge data about excessive cancers in workers at Hanford. This whole matter is still highly controversial: what she knew, what the co-worker did, and so forth.
In the Hanford work and other work, Alice Stewart was defending the linear non-threshold model of radiation damage. Her work (her error?) shows radiation to be more damaging than other studies reported. She is a hero to those who are opposed to nuclear power. For example, she received the Right Livelihood Award, an award also given to Armory Lovins.
As the quote distributed by the Grannies illustrates, Alice Stewart was also a follower of eugenics. Her concern was:
It's the genetic damage, the possibility of sowing bad seeds into the gene pool from which future generations are drawn. There will be a buildup of defective genes into the population. It won't be noticed until it is too late. Then, we'll never root it out, never get rid of it. It will be totally irrevocable.
Vermont and Eugenics 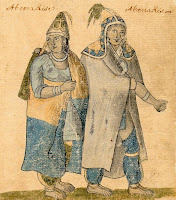 Eugenics was popular in Vermont, to the everlasting shame of the state. In the twenties and thirties, the indigenous Abenaki Indians were targeted for sterilization because of their "defective genes." According to their enemies, Abenaki were trying to disguise themselves as French Canadians, but they were actually degenerate "river rats." Hundreds, possibly thousands, were sterilized. Being identified as an Abenaki was dangerous. For example, playing the drums at home could bring the police, and the household might be added to a list of "degenerates."
The Ndakinna Cultural Center encourages Native American Culture in Vermont. Its website includes an excellent summary of the situation on the page: Eugenics in Vermont and the Hidden Lives of the Abenaki.
In 1999, UPNE (University Press of New England) published Breeding Better Vermonters, an important book by Nancy Gallagher about this history. Tara Marshall, an Abenaki, reviewed the book on Amazon. Some excerpts from her review:
It affected many Vermonters, including my grandmother's cousin, who was seized, put in a mental institution, and sterilized. The reason. He was Abenaki....the surviving victims of the Vermont Eugenics society (have not been) recompensed in any way for the pain and suffering they've been through.
I had never heard of these sterilizations until about a year ago, when I went to a booksigning by local authors. That day, Beth Kanell read from her young adult book, Darkness Under the Water. The School Library Journal description of that book begins with the following words:
Grade 8 Up—Molly and her Abenaki family get caught up in a government eugenics project set to rid Vermont of "weak links" in the genetic code.
At the booksigning, I liked Ms. Kanell and I liked her writing style. I didn't buy the book because the subject felt too dark for me. I feel bad about that. I didn't want to contemplate the painful past.
Vermonters Today
As humans and as Vermonters, we can not allow the cruelties of the past to become the way of the future. We must avoid supporting the agenda of eugenics. Obviously, this starts with refusing to distribute or support eugenics literature.
The Eugenics Grannies should be ashamed of themselves.
(I will post about modern genetics soon.)
------------------------------------------------------------------------
And now...for something really different....
It's Blog Carnival Time Again!
The Fifteenth Blog Carnival of Nuclear Energy is up at Next Big Future. Nuclear Townhall notes that Bellefonte plant at TVA is set to move forward again (construction was stopped in the 70s). Dan Yurman discusses the license process for Small Modular Reactors, and Charles Barton has a post about Australian climate scientist Barry Brook and his move to nuclear. Steve Aplin reviews the movie Countdown to Zero, about nuclear proliferation, including important insights about Iran's program. Brian Wang has put together a very interesting and eclectic mix of blog posts. Thank you Brian.
Come to the carnival! You always learn something.
DNA image from Wikipedia
Abenaki First Nations, 18th Century Image from Wikipedia
Posted by Meredith Angwin at 10:02 AM

"In the twenties and thirties, the indigenous Abenaki Indians were targeted for sterilization because of their 'defective genes.'"

and
"Alice Stewart is the author of the eugenics material handed out by the anti-nuclear grannies at a recent Public Service Board (PSB) meeting."

WOw! Meridith, you wrote this article in 2010. Do you know if The Eugenics Grannies organization lives on in 2017?

Also, I note that the book "The Woman Who Knew Too Much, Revised Ed.: Alice Stewart and the Secrets of Radiation" avialble on Amazon has a foreward by Helen Caldicott. Not having read the foreward, do you know if the two knew each other and by extension whether Caldicott has Eugenics leanings herself?

The Grannies are still active and several of the members are the stars of the anti-VY movie I reviewed in one of my posts. With VY closed, they have shifted much of their attention elsewhere, though.

I don't think Caldicott is explicitly pro-eugenics, but her thinking is so muddled that she may be for it, de facto, without knowing that she is. However, I am not accusing her of being racist or in favor of eugenics.