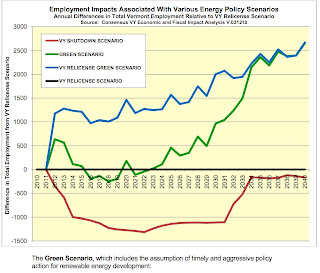 In an earlier set of posts, I analyzed several economic reports about the impact of shutting down Vermont Yankee. I posted the most straight-forward reports as Economic Report Well Constructed. These reports reviewed the situation if Vermont Yankee continues to operate past 2012 with the situation in which it shuts down. With VY continuing to operate, reports show $60 to $80 million dollars a year more disposable income in Vermont, and around $7 million a year in state taxes.
This also translates into jobs lost or jobs gained. The graph of job creation and loss (above) comes from the Legislative Consensus Report, released in March of this year. The comparison between shutting down Vermont Yankee and keeping it open is straightforward, and agrees with results from several other economic studies. The job consequences are shown in the chart above.
Aside: As I discussed in another post, Economic Reports: De-Constructed, the assumptions for job creation for the Green scenarios are a bit murky, so we are sticking to the simple cases. End Aside.
If you double click on the chart, you can compare the black line (Vermont Yankee keeps running, no other change) with the red line (Vermont Yankee shuts down, no other change). You will see that shutting down Yankee leads to a job loss of around 1000 to 1500 jobs in the state. This loss goes on for years. It's ugly.
Rumors and Experience 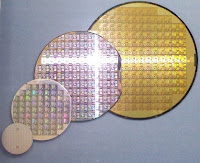 Recently, however, I have been thinking that these estimates of job loss in the state are far too low.
Rumors about IBM
The rumor is that IBM might shut down its wafer fab plant in Essex Junction and move out of state if electricity rates rise. According to Wikipedia about Essex Junction, IBM has been in town since 1957. According to everyone, including Wikipedia, IBM is the largest employer in the state. Various websites list the facility as having around 6000 employees.
The latest word-on-the-street that I have heard is that some people in Essex Junction are selling their houses and looking for jobs out of state. They believe that the IBM plant will close if Yankee shuts down and electricity rates rise.
Is there any basis for these rumors? Who knows? I do know, however, IBM is very concerned with electricity rates. For example, when Vermont added an electricity surtax to fund Efficiency Vermont, IBM and other large electricity users insisted on a way to partially opt-out of the surtax. So Vermont started the Energy Savings Account program, allowing eligible Vermont business customers to self-administer energy efficiency through the use of an Energy Savings Account (ESA).
Experience with Other Manufacturing
In my day job, I write for various Vermont businesses, and one of my customers has been the Vermont Manufacturing Extension Center (VMEC). VMEC's primary mission is "To Improve Manufacturing in Vermont and strengthen the global competitiveness of the state's smaller manufacturers." VMEC is a public-private partnership, partially under the auspices of the National Institute of Standards (NIST). Among other things, NIST is the home of the Balridge National Quality Program and the prestigious Malcolm Balridge Quality Awards.
On VMEC's web page, Impacts and Successes, the right hand column contains links to many success stories. (I wrote some of these.) I hope you will look at these stories. Think about which of these manufacturing operations probably use a lot of electricity.
A partial list of the businesses of these VMEC clients includes:
Do you think these companies have significant electric bills? I think so.
Would a rise in electricity prices cause all these companies to fold? No. I'm not into the worst-case doomsday scenarios. (I leave that to the plant opponents.) Would it make them less competitive, less likely to hire, more likely to cut someone's hours? Would some of them perhaps fold?
I think so. Look at the companies, and draw your own conclusions.

The Tip of the Iceberg
In between rumors about IBM, and the list of VMEC clients, I believe the economic costs of a rise in electricity rates will be much worse than the legislative report indicates. Much worse. I hate to use hackneyed phrases, but possible job losses around Vernon are "just the tip of the iceberg" for the effects on Vermont prosperity.
It's a big cold iceberg, and we don't need it. If we don't relicense Vermont Yankee, we'll be inviting that iceberg to dinner.
Silicon wafer image from Wikipedia
Iceberg from Wikipedia
Posted by Meredith Angwin at 9:09 PM

The small cadre of Democratic party hopefuls that caved to the out-of-state junkscience spinup against VY do not work industrial jobs, and only serve to gain (elected) employment by disenfranchising the 1500, or the 7500 who will lose out in the "Cemetary Vermont" infrastructure dismemberment.

In the "Cemetary Vermont" scenario, no local people of any worth will remain to impede out of state wealth in fashioning a gated retirement community out of an entire state.

In this scenario, well-employed locals are an impediment, raising the economic floor level for service employees, hospitality menials, etc., and introducing annoying work-related agendas, to the detriment of the desired silence, emptiness, and visual purity.

Vermont has shipped its prisoners out of state, and its electricity contracts out of country.With the advent of the "Cemetary Vermont" policy, it will have shipped its governance to Asheville SC (home of NIRS)... All that will remain at that point will be the chasing away of Vermont's newly-unemployable locals, and the importation of cheaper, more pliable day labor, to serve real estate moguls' needs.

Reminds me somewhat of how the Turks "managed" Armenia in 1905.

Thank you for writing.

I agree with parts of your note, but honestly, the Armenia analogy is too much! Nobody is herding Vermont natives into churches and setting the churches on fire!

There is a lot of scorn for working people among some of the rich retirees in Vermont. I could tell you stories. For example, our son used to live here, but the job situation was hopeless, so he now lives in New Jersey. I told this to a retired-from-big-city friend who said it was GOOD that our son had to live in New Jersey. If there were decent jobs around here, this place would BE New Jersey. I almost hit the man.

However, the implied program of the gated community for rich people is not going to work for Vermont. Let me give you a rich-people example.

We lived in Silicon Valley, and some of our friends became seriously rich. Two such friends visited us in June. The man and his wife were looking for a retirement location, and they used our place as a base to explore New Hampshire. And a base to talk and hike and drink wine and be treated to a great dinner at the kind of restaurant that appeals to wealthy ski tourists. We had a lovely visit. We see them every two years or so.

"What about moving to Vermont?" I asked them, somewhat naively. The man laughed. "Do you know what the taxes would be for someone like me?" he asked. "Vermont is practically the bottom of my list of places to retire."

In other words, "Vermont the Gated Community" is not going to work, either.

Exclusionism is not a widely held - or respected - attitude in 2010.

In 1638 when the Bay Colony expelled Anne Hutchinson, it seemed possible to simply drive away anyone not wanted, but exclusion died fast, overtaken by democracy in a single generation. Church burnings aside, the Bay Colony of 1638 , the Turks of 1905, and the "Cemetary Vermont" clique share a unique belief in driving out things unwanted.

When exposed, this is an unflattering attitude, full of callousness, curiously attracted to whatever lies grant machiavellian advantage, empty of regard for others, full of hubris, shallow, ugly, morally & ethically bereft.

Are 7500 IBM-VY ex-employees' trashed lives (the core of Vermont's atrophied work future), significantly more "Armenian" in outcome than they had to be?

A Cemetarian will say: "Let them just move away".
I take that as a sort of Vermontish "Arbeiter Heraus".