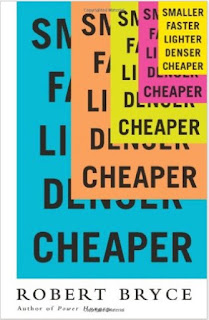 Robert Bryce is optimistic about our energy future, and indeed, the future of humanity. His books and op-eds are carefully researched and clearly written. Bryce does not claim that every problem will have a technological fix, but our frequently-successful search for such fixes have led to a world in which more people are living longer and healthier lives.  For example, in 1970, the average life span in the least-developed countries was 43 years. In 2011, the average for those same countries was 59 years.  Almost everywhere in the world, literacy is up, mortality  and maternal mortality is down, and lives are longer and better.

In this book, Bryce shows that this happy result is a direct consequence of our human quest to achieve more results while using less resources.  In other words, we seek to do our work in ways that are “Smaller Faster Lighter Denser Cheaper.”  His book covers some of the same ground as his earlier book, Power Hungry.  In this book, he expands the scope to fields beyond energy.

Some of the areas that he describes are familiar to all of us: the fact that computers are smaller is no surprise to anyone.  But other aspects of “smaller faster” were new to me.  For example, in poor countries, cell phones can encourage commerce. In Africa and Afghanistan, most people do not have bank accounts. The ability to buy goods by cell-phone has increased commerce and partially disabled corruption.  (The account is held by the cell phone company, and there are kiosks for people to deposit or withdraw cash.) In one case, Afghan policemen, paid through their cell phones, thought they had gotten a major raise.  Actually, the policemen were merely getting their full pay, without their superiors skimming about 30% of their cash payments before the policemen ever saw the money.

In expected ways, and in surprising ways, the world of making things smaller, faster, lighter, denser and cheaper has led to unprecedented prosperity and health.  For the energy to power this world, Bryce recommends the N2N plan described in Power Hungry:  Use natural gas (N) while building advanced nuclear (N).  I would amend this slightly to be sure to Keep Existing Nuclear while building advanced nuclear, but his basics are correct.

Some parts of the book are painful to read.  The title of one section is pretty direct: “Biofuels are a crime against humanity.” Government and academic reports question both  the practicality and the morals of biofuel production. Using land for biofuels increases the cost of food, increases the volatility of food prices, decreases the ability of poor nations to import food, and indeed, decreases our ability to feed the poor and hungry.

With many examples, Bryce shows that moving to low-density “renewable” energy would be a step backwards for human health and happiness. His analysis of McKibben’s “Energy Starvation” plan is well-referenced and scathing.

I hate to say that anything is “required reading” for everyone, but I strongly recommend that people in Vermont read this book.  Why Vermont?  Well, right now, Vermont has an official state energy plan that claims we will reduce statewide energy use by more than  1/3 by 2050.  Further, the state of Vermont “plans” to have 90% of the remaining energy come from renewable sources by 2050.  The energy plan admits that renewable sources are not as dense as  conventional sources, and that the ridges planned for wind turbines are important wildlife and watershed resources.   The Vermont plan is the opposite of N2N.  The Vermont plan is not about making things smaller, faster, lighter, cheaper.

Will Vermonters allow this plan continue to be our state plan, in which everything is justified on the basis of “low greenhouse gases”? Are we going to use the “Energy Starvation” plan proposed by those who hate nuclear energy (which also produces no greenhouse gases) and who also don’t seem to care very much about wildlife habitat?  Or will we take some reasonable version of N2N, choosing dense, relatively low-emissions energy sources.

Will Vermont continue to move to Smaller, Faster, Lighter, Denser, Cheaper, as humanity has always aimed to do?  Or will we go backwards? It’s up to us, right here in Vermont, to choose a happy and prosperous future.  Let’s not mess it up.

This review appeared in the February newsletter of the Ethan Allen Institute.

While you are looking at the newsletter, let me also recommend Willem Post's article Abandoning Low Cost Hydro for Costly Renewables.   Vermont is buying less power from Hydro Quebec, perhaps in the hope of building yet more instate renewables.

This is precisely why I loathe the green agenda. Of course, this has also led me to my support of nukes. I still remember, many many years ago, reading an article by a fervent Green supporter. He was, naturally, virulently anti-nuke. At the time I was quite concerned about the radiation risk of nukes, but when I saw this I thought 'If THESE are the sort of people who oppose nukes, I must be wrong!!' This led to my investigating the matter and my finally coming to the conclusion that my concern was unjustified.

Bryce is a journalist in an oil state. The sad thing about Texas is that it has a lot of farmers who could be out producing Iowa in the category of ethanol.

If I lived in Vermont I would heat with wood and oppose wind. Yesterday in Louisiana burned waste biomass. Too bad there is not a facility to use it.

If you read the book, you would see the quality of research in it. It is not just some kind of fossil-fuel agenda. Bryce is not the only person who has noted how biofuels tend to increase food prices. He is not just opposing renewables out of hand.

By the way, I decided not to publish your comment on my Diablo Canyon post. I hope people will support Diablo Canyon. I believe that you worked at Rancho Seco, and I realize that you seem bitter toward PG&E about what they did or did not do when Rancho Seco was in danger of closing. But in my opinion, those actions in the past have nothing to do with the importance of Diablo Canyon, right now and today.

And frankly, I have a daughter who is the author of two books. I don't agree with "the only thing you can learn from a journalist is their agenda." Don't diss people who sometimes put themselves in harm's way to bring you information.

I love books. It is journalists that I do not like. I suggest that you improve the quality of your research if you think biofuels are a significant factor in feeding the poor.

There are a very few journalist who have the education to understand science. When they report on science, I follow it up information from all manner of sources.

Just for the record, one of our sons in in broadcast journalism on the technical side. We are very proud of him. However, working in nuclear power we have been at the receiving end of bad reporting bad and corrupt reporting.

Couple of examples. I heard a report on NPR (National Pravda Radio) by an author of many books. It was hogwash. I researched the author. His publisher in the 70s was Pravda. I read an article on nuclear waste demonstrating that the journalist failed grade school US geography. Using AOL search engine, the story first ran in the China Daily News and repeated in 38 US newspapers.

My point is that it took me 30 seconds of fact checking to document obvious communist propaganda.

Let me ask this. If I wanted to learn about corrosion of stainless in nuclear power plants would I read USA Today, books by Bryce, or EPRI reports?