Some people in Vermont have been opposed to the continued operation of Vermont Yankee. These same people are often opposed to fossil power sources.  How do they plan to obtain electricity? They often say that Vermont should "follow the lead of Germany in using renewables."

I don't want to follow that lead, because I don't think the German program is leading anywhere happy. A few days ago, a three-part article in Spiegel Online confirmed my opinion of the German experience.  The Spiegel story about renewable energy is in three parts:

I am an administrator on the Save Vermont Yankee Facebook Page and I thought that this Spiegel story would be of interest to Vermonters.  So I posted it on that page. The Facebook page tweets a link to its posts.  On Twitter, I am  yes_VY.  Here's my Spiegel tweet as it appeared on Twitter.

Who knew?  Energiewende Germany found this tweet and a similar one from NEI.   Here's their answer:

He (or she) linked to the International Energy Agency (IEA) 2012 report on world-wide energy use and prices.  Here's a link to that 2012 IEA report. (Warning, it's a big pdf and slow to download.)  To save time for my readers, I have copied page 43 of the report below.

Electricity for households in Germany is about 35 cents per kWh, the second-highest in Europe.  The equivalent price in the U S is about 12 cents per kWh.

Who is trying to scare whom? 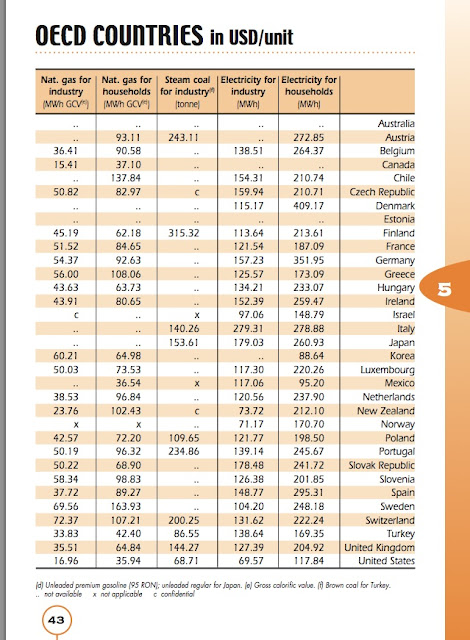 It's been mighty quiet from Energiewende recently.

I encourage you to follow the Spiegel links in this blog post, and that is certainly enough reading.

Still, I need to link to one more article.  My friend Guy Page had a guest post at this blog: As Germany Goes, So Goes Vermont?  In May of this year, he covered much of the same information Spiegel covered, but in a more succinct fashion.

However, to get the German view on this subject, you should read Spiegel (the links above).
Posted by Meredith Angwin at 1:39 PM

Interesting and good responses. Of course my eye immediately picked up that Denmark's prices are slightly higher than Germany's - but that is no comfort for renewable enthusiasts.

I also looked to see which countries were brave enough to charge industry the same price for electricity as domestic consumers. Italy wins the equality prize here, although with a hefty price tag for industry, and Mexico goes one better - industry gets a low price, but consumers have a significantly lower price again.

Thank you Joffan! I have corrected the post...second-highest in Europe.

I agree with you. I find these facts very interesting indeed.

Germany is building more coal and gas burning plants as we speak. They are importing (nuclear) power from their neighbors. Their reliance on natural gas makes them economically vulnerable to Gazprom, a Russian firm in a country whose disposition towards the West is problematic at best. Those are the only things that make Gernmany's program to develop unreliable energy sources viable. That and massive subsidies in the form of feed-in tariffs.

If anything, Vermont's situation may end up more like Denmark. I can see them bidding with Ontario Hydro to provide backup hydropower when the windmills aren't spinning. So Vermonet will be reliant on a foreign source of energy (they are today to some extent, I know). They'd rather depend on a foreign country than their own resources. So much for that vaunted New England sense of self-reliance.

Certainly the per kwh price of electricity is way lower in the United States than in Germany mainly due to a variety of high taxes on electricity over there (sales tax, environmental tax, FIT tax, grid expansion for offshore windparks tax, ...). Whole-sale electricity prices probably are somewhat more comparable between the two countries.

However, we do use almost twice as much electricity per capita than Germans, so @Energiewende might have a point about monthly electric bills being in a similar range. But for the same total cost we get to run our air conditioners and huge televisions, while Spiegel article implies that low income Germans only get to run a few lightbulbs and a fridge for the same price.

I don't feel like I'm particularly frugal when it comes to electricity usage, but my monthly bill is almost always under $20 in nuclear and coal heavy Michigan. I doubt many Germans are paying under 15 euros per month for electricity.

just a little remark: germany imported just for a little while energy from france after fukushima and the decision to shut down 8 nukes. in the meantime germany became quickly a net exporter again - a point that is often overseen in the debate. electricity cost is increasing in germany indeed but the cost for gasoline and heating oil actually has a much bigger part than the cost of electricity .. it may be a bit political, all of this..

Thank you for your comments that illustrate other aspects of the issue. The amount of electricity Americans use, the price of gasoline, etc. Hard to do a totally comprehensive post based on tweets, I guess! The best thing is to read the Spiegel articles.

However, I am and have been unimpressed by the "Germany is a net exporter" argument. They basically breaking the European grid by flooding it when GERMANY has extra power, whether or not other countries actually WANT that power! Czech Republic and Poland are taking action against German electricity aggression---"we export when it pleases us, and you can just back off your generators when it pleases us to export!"

Blogger report on Die Welt article...Germany routes intermittents to Eastern Europe instead of attempting to use them itself.
http://notrickszone.com/2012/12/30/poland-czech-republic-to-block-out-germanys-unstable-green-electricity-coal-to-play-a-major-role/

This kind of "export" is something Europe doesn't need.

Excellent article, Meredith! And great job pointing out that "exports" don't mean that they are helping other countries or that they are making money from it. I did research from OECD data showing that they are generally exporting at a negative prices, ie at a LOSS, because their electricity is so variable. Interesting that they must resort to scare tactics and frankly deceptive propaganda. Makes one wonder how long the straw man will last.
keep it comin' ! :)
caroline