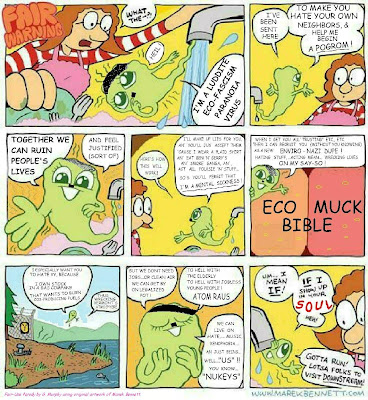 Entergy Makes Misleading Statements and is Punished
Recently, the Public Service Board awarded various intervenors (VPIRG and others) financial restitution to be paid by Entergy. The basis for this award was that Entergy had supplied misleading information about its piping, causing the intervenors to be forced to spend money on research and attorney's fees on these issues.
The PSB ruling was somewhat confusing. Here's a quote, edited slightly for length:

However, we further conclude that reasonable attorney's fees and costs of VPIRG, NEC and WRC subsequent to the disclosure of the leaks, and that were and will be incurred as a result of Entergy VY's provision of incorrect information, should be reimbursed by Entergy VY. ..... there is a clear causal connection between the misrepresentations made by Entergy VY and additional expenses that WRC, VPIRG, and NEC would incur, and in fact have incurred, in this docket.....The affidavits supplied by NEC show that its staff person, its technical consultant, and its attorney expended a considerable number of hours to address matters in Docket No. 7440 directly related to the Entergy VY misrepresentations. For example, NEC's technical consultant, Raymond Shadis, affirms that between January 7, 2010, (the date on which the existence of the leaks was publicly disclosed) and March 10, 2010, he spent 172 hours on Docket No. 7440 issues related to piping, soil and decommissioning.

I am not a lawyer. and I don't know why intervenors are paid if they have to do more work due to misleading statements by one of the parties. I also can't get too excited about this. Entergy won't decide to shut down the plant because they had to pay Raymond Shadis. I don't think this ruling is fair, but I also don't think it's a big deal.
What Were the Real-Life Consequences of the Entergy Statements?
Without going through the entire history, from "They Lied" at the potluck to the legal report showing that Entergy statements were careless but unintentional, let's just look at a hypothetical case. Let's say Entergy had said: "Yes, we have some underground piping that carries water with radionuclides. It is the piping that takes the non-condensable gases and some water vapor from the turbines to an advanced condenser. The condenser is also a heat exchanger. The piping returns the condensed water to the plant."
Now, since I noted before, the service water is more of a reliability problem than this off-gas system, this statement might have changed nothing about the review process. On the other hand, it might have changed the inspection protocols. Entergy could have been required to open up the famous tunnel and inspect the pipe at that point. Let's say Entergy had been required to do so, and let's say they discovered the leak before any tritiated water touched the soil. So what?
A great deal of time and trouble would have been avoided. However, in this scenario, the same amount of tritiated water would have been detected in the river or the aquifers below the plant. No tritiated water. Zero. Nada. Below the detection limits.
In other words, Entergy's misstatements gave them a black eye and cost them money, but made no difference to the environment.
The Lies of the Anti-Nukes
I don't know where to start. The constant chorus against Entergy of "tritium is getting into the river and nobody can fish in it now." (No detectable or significant amounts or tritium got into the river, and there is no problem with the fish.) Or "They lied under oath." (No, they didn't.) Or "Oak Ridge Associated Universities does Junk Science" (this was a pre-tritium accusation).
As I pointed out in a recent post, the lies don't stop there. Shumlin, Smith and Klein are quite happy to describe radioactive strontium as "attacking the bones and teeth" of Vermont's children. They describe the tritium leak as Vermont's BP, an environmental disaster!
What Are the Real-Life Consequences of the Lies of the Anti-Nukes?
And what consequences have all these anti-nuke lies had? They have been effective at turning public opinion against the plant, which may have to shut down. I hope not. Still that has been the purpose of the constant accusations and street theater. Of course, they want to shut down the plant, so they like these consequences.
The other real-life consequence is that the constant lies about the amount of radioactivity released into the environment, and its effect on rivers and children...these lies are destroying the Vermont brand. As I noted before, if I lived in the Midwest and saw all the ranking Vermont legislators talking about all the radiation and Vermont's BP and children's teeth...I would never buy a Vermont product again.
The lies of the anti-nukes will cause people to suffer. The anti-nukes don't care about laying off the VY workers. They publicly malign Vermont farmers and food products and destroy the Vermont Brand.
All they want is a hobby horse on which they can ride to election. Scapegoating is an age-old technique, and the anti-nukes are using it.
For these lies, the people of Vermont will end up being punished. 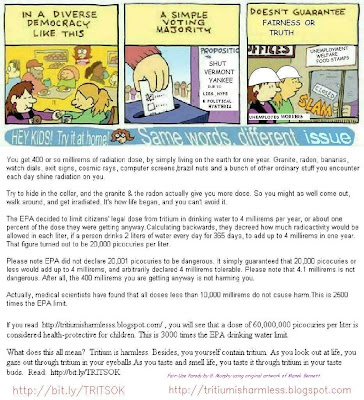 A word about the cartoons.
If you remember, I suggested that pro-nuclear advocates need some political cartoons. I mentioned the Marek Bennett cartoons, Mimi's Doughnuts, some of which I hate (It's Tritty) and some of which I love (Same Words, Different Eras). George Murphy (no, I don't know if that is a pen name) immediately sent me links to Vermont Yankee cartoons that he derived from the original cartoons. Since then, Murphy and I have had quite a correspondence. Since his cartoons are parodies or extensions of political cartoons, they are free and protected speech.
So the question arose: would I run them? They are more hard-hitting than my usual posts, but that is what cartoons are, after all. Hard-hitting. Visceral. Perhaps too honest.
Murphy has more of these. Let me know what you think.
Note: After comments and email exchanges with the original artist (Marek Bennett) the attribution at the base of each cartoon now reads: Fair Use Parody by G. Murphy using original artwork of Marek Bennett. I thank G. Murphy and Marek Bennet for resetting the attributions to everyone's satisfaction.
Posted by Meredith Angwin at 5:28 PM

Thanks for the heads-up on the comics, and thanks for your comments. As a cartoonist, I always like to see how my ideas and artwork are used out there in the world...
Content aside, I appreciate (and applaud) the whole fair-use parody concept. However, I'd recommend a little more clarity about origins. As an artist, I'm uncomfortable with two issues here:
-
> 1) Other people signing their names to artwork that I originated
-
> 2) Other people altering MY artwork and then leaving MY intact signature on it.
-
Of these two, I'm actually more concerned with the latter, which can lead the reader to think I produced artwork that technically is a result of a process of sequential alteration which was beyond my control, and which may not represent my beliefs and intentions for the artwork.

With this in mind, I'd suggest wording the attribution as something like, "Parody by using artwork by ", and then of course specifically note that MY website is the "original artist website" or something like that.
It starts to get wordy, but as you know when you're borrowing/sampling/altering something that somebody else has worked hard on and believes in, clarity and transparency serve everyone.
-- Marek

Marek
Thanks for the help in rewording. I have asked the parody artist to rewrite the signature line, and we should have new versions up in a few days. These will use your suggested wording for the signature line, or something close to your wording. In the meantime, I hope everybody reads Mimi's Doughnuts, and asks their newspaper to carry it!
Best,
Meredith