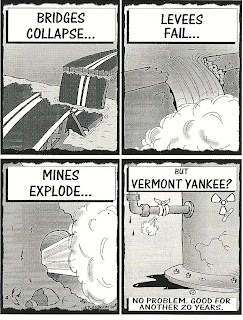 Half the problem is that by their very nature, radioactive substances can be detected in vanishingly small quantities.

But also, along with a baseline value for the Sr-90, I'd be demanding that they run an assay for the amount of Hg in the flesh of these fish that might have come from any dirt-burners in the area.

In terms of ⁹⁰Sr, that's roughly 1 part per billion, or about the same contamination you'd get if you dropped a grain of salt into an inflatable kiddie pool.

⁹⁰Sr undergoes β- decay at an energy of 0.546 MeV. That means about once per second, an electron is ejected from each half-kilogram with enough energy to increase the temperature of that fish's bones by 9.5×10‾¹⁶ K, or about a quadrillionth of a degree fahrenheit - roughly 1/3rd the thickness of the line between hot and cold in your shower.

And I'll bet the fish are also riddled with potassium-40 and carbon-14. I recall the suggestion made by one wag some time ago that the term "Banana Burden" should be used by the scientific community to relate such small measures in easily related unit increments for the news media to understand (e.g.the perch would be <2/100ths, less than 2% of a banana's 3,520 pCi/kg of k-40 alone). Also reminds me of when supermodel Christie Brinkley tested the water off
Long Island Sound (adjacent to Millstone) and found uranium in the seawater and got media coverage for her implication that the NPP was somehow leaking uranium into the ocean. Of course some 4.5 billion tons of uranium is dissolved naturally in the sea, perhaps the oceans will be a major uranium ore in the far future.

Kudos also on relating the info on natural strontium found in fish ear otoliths, you learn something new every day on the internets.

Thank you all for the very helpful analyses of that fish and pointing out all the implications it (doesn't) imply.

Fordi, I saw you are a blogger, and I want to say how much I enjoyed your blog about closing the fuel cycle.

I have added your blog to my Favorite Links list.

By the way, people may or may not have noticed that I am aiming at more local blogs on my blogs list, and putting more general energy or nuclear blogs on my links list. However, some general blogs cover VY and Indian Point regularly, so they stay on my blogs list. (Yes, it is confusing where a link should go.) My blog list includes blog post updates. I am trying to make sure my blog list is interesting for people in Vermont and New Hampshire.

I love readers from everywhere, though, not just around here! My blog list was getting too long, and I had to make some decisions on how to manage it. This is my decision for now, because this blog is ultimately about supporting Vermont Yankee.

How many picocuries of Sr-90 in human bones?

The body absorbs Sr when there is not enough Ca in the food. Take your Caltrate. (HaHa)

Half live is 30 years, so Chernobyl Sr-90 is half gone. Atmospheric nuclear testing Sr-90 is 75% gone. However the southern hemisphere atmosphere does not mix with that of the northern, so if you are concerned buy property in Argentina.