The French Brand, the Vermont Brand, and Areva 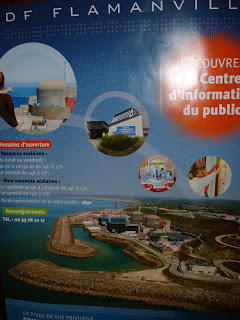 Areva is a French company that builds some of the most advanced nuclear steam supply systems in the world. Areva also has facilities and skills in every phase of the nuclear fuel cycle, from mines to enrichment to reprocessing to waste vitfrication. For example, Areva supplies recycled MOX fuel rods to several countries, including France, Japan and Germany.

Areva U.S. has its own blog, and takes bloggers seriously as reporters and opinion leaders. Last week, Areva hosted a group of American and Canadian bloggers on a trip to Areva facilities in France. I was one of the bloggers. It was the trip of a lifetime. (Disclosure. Areva paid the expenses for many of us, including my expenses.)
Going to France and visiting the Areva facilities was like visiting the kind of future that I hope will come to this country. High tech nuclear facilities, wonderful food and wine, fast electric trains speeding through the countryside. Outdoor cafes, espresso and conversation.
The French Brand
France has a "brand," and France is easily as proud of its brand as Vermont is proud of its own brand. In wines, the whole concept of appellation d'origine contrôlée came from France, starting with Côtes du Rhône in 1937. This branding helped make French wines world-famous. Or perhaps you might think about food. Has there ever been a cookbook as famous as Mastering the Art of French Cooking? Though Germany has excellent food and amazing pastries, can you imagine a book called Mastering the Art of German Cooking?
And of course, "We'll always have Paris."


French Nuclear
As most people know, 80% of French electricity comes from nuclear power. Nuclear gives France clear skies, high-speed trains, and the kind of technical knowledge that lets France export reactor systems to China and earn money from service contracts with Japan. ( I will blog about this in subsequent posts.)
The French are committed to educating people about nuclear. The picture at the head of this blog is a poster advertising the hours for touring the Flamanville PWR and EPR plants. This poster was in the waiting area of a restaurant. Double-click on the graphic to read the plant tour hours. Tour hours are described for when schools are in session and when they are on vacation. The French clearly expect children and families to tour nuclear facilities.
Cows and sheep graze near the nuclear sites and produce milk for the famous French cheeses. In the south of France, vineyards are just over the fence line from the nuclear facilities. All the facilities have ISO 14001 environmental certifications and do extensive environmental monitoring. The wine and cheese are not radioactive.
Nuclear energy is part of the French brand. Despite the excitement and street theater of nuclear hearings in southern Vermont, Brattleboro anti-nuclear attitudes are not doing the French brand any harm. People still visit the French Riveria, the Loire Valley, the Normandy beaches, and Paris. They eat French foods.
We'll always have Paris.
However, anti-nuke attitudes are destroying the Vermont Brand.
The Vermont Brand
The Vermont Brand is to some extent, a copy of the French brand, adding maple trees and subtracting vineyards. Vermont aims to have high-quality food products and an enviable way of life: clean air, trout streams, unspoiled forests. Vermonters make a concerted effort to be sure Made In Vermont is a symbol of quality for foods.
As I pointed out in a recent post, however, some forces in Vermont are trying to destroy this brand for their own political gain.
Shumlin called the ongoing leakage of tritium, strontium-90, cesium and other radionuclides as the "greatest environmental crisis in Vermont's history."
"This is Vermont's BP," said Shumlin, referencing the oil spill in the Gulf of Mexico due to an offshore drilling operation gone awry under the watch of British Petroleum.
These recent remarks are not the first such attack on Vermont's brand. I was at a meeting in the fall where Tony Klein, head of the Vermont House Energy and Natural Resources Committee, stated that the existence of Vermont Yankee on Vermont's soil could destroy the Vermont brand.
Whatever people may think of Vermont Yankee and Entergy, the fact remains that the tritium leak was a very small amount of tritium, no hazard to health, and undetectable in any water outside the plant boundaries. There was some strontium in soil near the leak. This soil would fill about two pick-up trucks, and is being removed. The existence of these leaks cannot destroy the Vermont brand.
However, the rhetoric of our politicians might well destroy the brand. If I lived in the Midwest, and saw a TV show in which Vermont leaders were comparing the tritium leak to a massive oil spill, and were describing strontium as "attacking the teeth and bones of children" in Vermont, I would come to the conclusion that Vermont was a radioactive wasteland. I would probably avoid Vermont-made products, and buy New York cheese and New Hampshire maple syrup in the future.
Perhaps our leaders could learn how to attack Vermont Yankee without attacking Vermont's livelihood. Or is that too much to ask? Perhaps the hyperbole of massive spills and children being attacked is just too good to resist. Despite the consequences to the state of Vermont.
As I said in an earlier post: Shumlin, Smith and Klein are crazy. It's the only possible explanation.
Some Links
I wasn't the only blogger in France. Rod Adams has an excellent overview of our trip on his blog. Stephen Aplin compares the situation in France to the situation in Canada in his blog on Canadian Energy Issues. And Areva notes Rod Adams comments in Areva's own blog.
(Reading these posts in almost like being there. Well, actually, it's not. Being there was like being there.)
Meanwhile, Next Big Future has hosted the Fifth Carnival of Nuclear Energy, with links to posts about Republican Energy Strategies and advanced nuclear systems. Worth a look!
Posted by Meredith Angwin at 6:47 PM

I just want to briefly point out that France isn't without it's own over-reactions to minor reactor environmental/safety issues. The Tricastin wine region recently changed its name to avoid being associated with the Level 1 INES uranium solution leak at Tricastin back in 2008. (People were buying less wine.)

JD. Thank you for the note.
I didn't know that the Tricastin region decided to change the name of its appelation because of a spill. I also did not mean to imply that everything is great all the time in France.

However local people reacted or over-reacted to the Tricastin incident, I doubt that the local legislators went on TV to talk about the "worst environmental disaster ever" in the region, and describe how the spilled material was "attacking the teeth and bones of children." That is the situation we have in Vermont. Peter Shumlin is the President Pro Tem of the Vermont Senate, Shap Smith is Speaker of the Vermont House, and Tony Klein is chair of the House Energy and Natural Resources Committee. You can watch these men describe the leak in terms that are completely out of touch with reality. Their words are very damaging to the "pure and natural" branding of Vermont food.