The Inauguration: Finally, I Understand the Honeymoon Concept 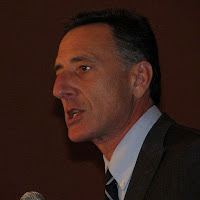 Peter Shumlin was inaugurated as Governor of Vermont today. During his campaign, he described himself as "Vermont Yankee's worst enemy." In his inaugural speech, he laid out an ambitious agenda, including health care, broadband, and education. He didn't mention Vermont Yankee. You can read his inaugural speech or you can listen to it.
Enough speculation. As many have noted, running for office is quite different from holding office. Someone asked me what I thought Shumlin would do as governor, and I answered: "Disappoint a lot of people." He made many campaign promises, and they will not all be fulfilled.
I Finally "Get it" about Elections and Honeymoon Periods
I finally understand the "honeymoon" period that newly-elected officials usually receive from the press. I never understood it before. I thought it was just an odd courtesy that the press traditionally extended. Actually, it is very necessary.
The new office-holder needs time to define what he or she is going to do, in office. You can't judge them by what they said on the campaign trail. What they said during the campaign may or may not be relevant.
Shumlin will hold his inaugural ball tomorrow night. It is time for his honeymoon to begin. I honor it with the classic Vermont song.

Posted by Meredith Angwin at 6:42 PM

Mr. Shumlin will need to recalibrate his agenda, now that his mistakes could affect 620,000 people.

His new look may seem "Pinnochio-esque" to some.

You know, I'm a bit conflicted. Politicians often *say* what's popular to *say*, when campaigning, and *do* what will be popular when it's done.

On the one hand, I do want politicians to *do* the right thing. On the other hand, I hate to see good politicians *lose* because they are *honest* about what they intend to do on the campaign trail, and get beaten by an opponent who doesn't hesitate to lie to the voters, if that's what they think will get them elected (then do what the "other guy" said he was going to do all along, because the consequences of doing what was promised on the campaign trail would be, in reality, bad).