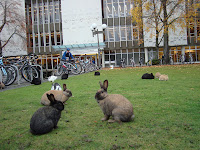 The Lawsuit
In April, Entergy filed suit against Vermont for pre-emption of the federal right to regulate nuclear plants, and for breach of contract. Entergy also filed for an injunction. If granted, the injunction would prevent Vermont from ordering Vermont Yankee to close while the lawsuit and the appeals take place.
On Thursday, June 23, a hearing on the injunction will begin in Federal Court in Brattleboro, Vermont.
Right now, legal actions and filings are multiplying like rabbits.
So Many Briefs, So Little Time
For days, in various places on the web, I have seen links to different briefs on the lawsuit and injunction. These links are not all in the same place, and it is hard to keep track. As aservice, I am writing this blog post of links to the law briefs. This list is not complete, but I haven't seen a better list anywhere else, so here we go.
Meetings, Hearings, and Briefs
NRC Meeting: I want to point out there there is an NRC meeting in Brattleboro on Wednesday night, June 22, Brattleboro High School 6:30 p.m. This is the annual open review for Vermont Yankee, and has nothing to do with the lawsuits. I blogged about it before, but thought I would include a reminder.
First Lawsuit Hearing: The first hearing in the court case will be about the injunction, and will begin Thursday, June 23, Brattleboro District Court, 9 a.m. Here's a link to the Court Calendar for Thursday.
Finding the Briefs: All the briefs in these filings are public records, but they are not always straightforward to obtain. Many legal document come through the PACER system, Public Access to Court Electronic Records, which seems to a paid system of some type. However, some websites (the Commons, the Vermont Law School blog) link to legal briefs, and other websites (Entergy, CLF) put their own briefs on-line. I am including the entire URL to show where the briefs are located.
Links to the Briefs
The main brief for Entergy's contentions in the lawsuit (not the injunction)
http://www.entergy.com/content/investor_relations/pdfs/4-18-11_complaint.pdf
Entergy Injunction Brief, through The Commons (Brattleboro newspaper)
http://www.commonsnews.org/site/assets/files/COMM-0098.entergy.001.pdf
The state response to Entergy injunction brief, through Vermont Business Magazine and the State Attorney General. This response comes in several briefs
http://www.vermontbiz.com/news/may/vermont-responds-lawsuit-filed-entergy-vermont-yankee
State general response to the injunction
http://www.atg.state.vt.us/assets/files/Defendants%20Memorandum%20Of%20Law%20In%20Opposition%20To%20Plaintiffs%20Motion%20For%20Preliminary%20Injunction.pdf
Declarations in support of the state general response:
Justin E. Kolber
http://www.atg.state.vt.us/assets/files/Declaration%20Of%20Justin%20E%20Kolber.pdf
Bruce E. Hinkley
http://www.atg.state.vt.us/assets/files/Declaration%20Of%20Bruce%20E%20Hinkley.pdf
Seth G. Parker
http://www.atg.state.vt.us/assets/files/Declaration%20Of%20Seth%20G%20Parker.pdf
Robert deR. Stein
http://www.atg.state.vt.us/assets/files/Declaration%20Of%20Robert%20deR%20Stein.pdf
The Conservation Law Foundation and VPIRG filed a Joint Friend of the Court brief in support of Vermont. It is on the Conservation Law Foundation (CLF) website.
http://www.clf.org/wp-content/uploads/2011/05/44-1-CLFVPIRG-amicus-memorandum-5-31-11.pdf
Massachusetts filed an Friend of the Court brief in support of Vermont, which is linked through the Vermont Law School blog
http://wordpress.vermontlaw.edu/vy/files/2011/06/Doc-58-Amicus-brief-of-Common-of-Mass.pdf
The New England Coalition (NEC) Friend of the Court brief in support of Vermont includes about twenty attachments. You can link to them all on the NEC home page
http://www.necnp.org/
Vermont Sur-Reply, linked through Vermont Law School Blog
http://wordpress.vermontlaw.edu/vy/files/2011/06/Doc-59-Attachment-1-Vermont-Proposed-Sur-reply-to-Entergy-Reply.pdf
Missing Links
I haven't found everything yet.
The Sur-Reply above was based on an Entergy Reply to Vermont's reply to the injunction. I can't find the Entergy reply on which the Sur-Reply was based.
According to the Brattleboro Reformer, this Thursday Entergy filed Proposed Findings of Facts. I have no idea if these Findings of Fact are available on-line, but I know I can't find them.
If the Justice Department or the NRC enter the lawsuit, we can expect more briefs, of course.
Help Wanted
If you know of any links to briefs, please let me know so I can amend and update this post.
While putting this post together, I decided to ask people to please click on the Donate button and join the Energy Education Project ($30). Or at least donate $10 toward the work of informing people about their energy choices. Maybe it was the sight of all these briefs, prepared by highly-paid lawyers and consultants, that made me think of this.
As they say, "Only a lawyer would call an fifty-page document a brief."
Happy reading! Remember to donate!
Rabbits overrunning the University of Victoria campus, from Wikipedia
Posted by Meredith Angwin at 7:48 PM

Have you heard much of the Level 4 emergency in Nebraska concerning at least the Ft.Calhoun plant and also maybe the Cooper plant which has been popping up in my news search? This is very concerning as the flooding seems to be pretty intense over there and I've got family members nearr the region in a few days.
I know the level 4 is the lowest,ut it's out of only 4 different levels of emergency, does it take a lot to get on the 1st level? I just have never hears of an LVL 4 nuclear emergency.
Thanks alot for any help

Hi. Level one is indeed the lowest: I believe that when we had low grade earthquake here in Vermont about a year ago, that was a Level 1. I believe it means..."something out-of-the-ordinary happened and everything looks fine but we are checking it. " I think a flood would qualify for level 1.

Dan Yurman did an excellent blog on Ft. Calhoun about two days ago. I think you will find it both informative and re-assuring.

Oops! Of course, I meant level 4 is the lowest. Sorry! But level 4 is as I described it: something happened and we are checking it over...