Manufacturing and Fuel Cycle in France: AREVA and Nuclear Communicators 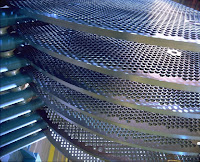 A year ago this week, I was in France at an AREVA-sponsored trip for pro-nuclear bloggers. We saw the entire fuel cycle, including uranium enrichment, reprocessing, and waste vitrification. I was very glad to be invited to see these things with my own eyes.
The trip was inspiring. I began solid friendships with other pro-nuclear bloggers, and visited a country that embraces clean air, good food, and nuclear power. Here are some of the things I saw and learned on the trip.
Improved Manufacturing: Support Plates as Giant Jewelry
A PWR steam generator has tubes carrying water from the reactor: these tubes pass through support plates which hold them in place. The illustration above is a set of steam generator support plates, manufactured at AREVA's facility at Chalon.
Part of the time I worked in nuclear power, I was in the Steam Generator Owner's Group at EPRI. In those days, support plates were rather crude things built of relatively low-quality steel. The holes for the tubes were either "drilled" or "punched" and the quality control wasn't particularly good. These support plates caused problems for PWR reliability.
Now, steam generators are being replaced in many PWRs, and AREVA is building some of the new ones. Modern support plates are high quality steel, and each tube opening is carefully made, measured and polished. As one person on the trip described it: "These support plates are like huge pieces of jewelry." Yes. Precision jewelry.
We have not built new plants in this country, but the nuclear industry has made amazing progress in building new and better components for existing plants. I am glad I was able to see this.
Fuel Shipment: Porcupines Coming Down the Road

In America, we keep spent fuel in on-site fuel pools, and move it slowly into dry cask storage. In France, there's a huge central fuel pool at La Hague at the recycling facility (at left). The pool is in the facility where the spent fuel is processed into new fuel.
How does the used fuel got to that big facility? On my trip, I learned the simple answer: used fuel moves by road and by rail.
The used-fuel shipment containers are shown at the right. These containers are extremely sturdy, can be hit by locomotives without breaking, etc. The French hold used fuel at the reactor site for less than two years (usually). Therefore, French shipping containers carry fuel which is physically hot. The container looks a bit like a porcupine. Vanes stick out to promote cooling and heat transfer.

In this country, we tend to get tunnel vision. We think that fuel cannot possibly be moved until it has cooled in a local fuel pool for at least five years. When I went to France, I realized that is just a choice we have made. Fuel is moved much sooner in France, and very safely.
Meeting People and Friendship
I have to finish with a view of the group in front of the Melox facility which manufactures MOx fuel. To the left is our guide from Melox: then Steve Aplin (wearing shades) of Canadian Energy Issues: Jack Gamble of Nuclear Fissionary: Rod Adams (also wearing shades) of Atomic Insights: Gwyneth Cravens, author of Power to Save the World: Jarret Adams of AREVA and the AREVA North America Next Energy blog, and me.
Friendship was the greatest gift of the trip. 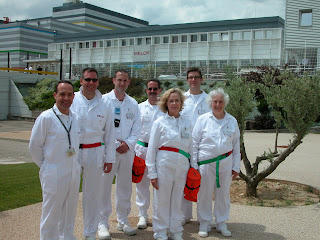 Post Script about the Anniversary:
I keep a Levenger five-year journal. Among other things, that means I always know what I was doing on the same day last year. I find the five-year-journal's short format very informative. It helps me understand what I wanted, what I did, and how I succeeded or failed. It's also useful for figuring out when my favorite flowers are likely to bloom.
I used to do more elaborate journaling, but I never wanted to re-read the stuff I wrote. While the extensive writing helped me at some level, it didn't inform me as I moved forward in my life. In contrast, a five-year journal is more like a log book, and I thoroughly recommend having one. If you buy a five year journal, buy a good one, like the Levenger journal. After all, it has to last five years. (I get no money from Levenger from this endorsement!)
All illustrations on this post are courtesy of AREVA.
Update: Thanks for the link, Jarret! A Trip Down Memory Lane at the AREVA blog.
Posted by Meredith Angwin at 7:00 AM

Meredith - thanks for the memory revival. I think I might follow your advice and get myself a five year journal.
Rod Adams, Publisher, Atomic Insights and proud member of the group in the photo.

“We think that fuel cannot possibly be moved until it has cooled in a local fuel pool for at least five years.”

That is just the way the regs are written for most plants.

Are you suggesting the NRC could learn something from the French? I’m sure Comm. Jaczko is all ears (or mostly forehead, and then some ears - as a non-licensed bunny, I can say that).

Thank you all for the comments! Glad you are still reading, Kit!