The Strontium Fish and the Associated Press

In August, the Vermont Department of Public Health analyzed some Connecticut River fish for radioactive strontium. To their surprise, they found strontium in the flesh of one fish (they usually find it in the bones). Amounts were background levels, and officials in the Department of Health said that they did not believe the strontium came from Vermont Yankee, there was no pathway from Vermont Yankee to the river for strontium, and the levels of strontium in the fish were very low. The fish would have been safe to eat. (For background on all this, I recommend Victoria Barq's posts at NEI Nuclear Notes and NRC Chairman Jaczko's letter to Representative Markey on the subject.)
Larry Smith, plant spokesman, said there was "absolutely no evidence that Vermont Yankee is the source for the strontium 90."
On the same day as the announcement, AP reporter Dave Gram wrote an article which said that Smith's statement did not mention the plant's announcement in May of 2010 that strontium-90 had been found not in groundwater, but in soil samples taken from the plant grounds.
Indeed, there had been some strontium found in soil near the tritium leak. All such soil was removed and appropriately disposed. No strontium was ever found in the groundwater, which means it did not migrate to the river. As I quoted in my August blog post, Irwin (of the Vermont Department of Health) says he doesn’t believe the Strontium-90 found in the fish was from Vermont Yankee. “We would need to see a pathway between the source and the fish,” he said.
You would think that would be the end of the story. It wasn't.
The Next AP Report
On August 6, Gram wrote another article about the fish. In this article, Gram reported that the Vermont Nuke Plant Had Past Radioactive Releases. Quoting his article: But in at least one of the quarters in each year from 2002 to 2005, Vermont Yankee told the NRC in its annual report on radioactive leaks that it had released some strontium-90, a radioactive substance linked to cancer and leukemia.
A question occurs. Did Gram look at the reports to the NRC, or did he just quote Paul Gunter of Beyond Nuclear about the reports without checking the reports? Basically, yearly releases of Sr 89 and 90, combined, were about two ten-thousandth of a curie. This information on quantity is in the NRC reports referenced above. I am preparing another blog post with links to NRC reports. (If you are impatient with my blogging, please go to the NRC website and search the Adams files for Vermont Yankee effluent reports.)
All put together, the reported releases are tiny. Strontium 90 releases from the plant are even smaller: I added strontium 89 and 90 to get ten-thousandths of a curie. Strontium 90 releases are on the order of ten to the minus 7 or 8 curies. This is in the level of ten to hundred billionths of a curie. In the biosphere, these releases cannot be distinguished from background strontium.
Why No Numbers?
Those numbers are not in the AP story, however.
So, question arises: why did the reporter write that there were releases and not quantify the releases? The numbers are in the same NRC reports that lead to the conclusion that "Vermont Yankee reported releases" to the NRC. Did the reporter not know the quantities (poor quality reporting)? Did he know, but decide not to admit the quantities were very low (biased reporting)? Obviously, I don't know the answer to these questions.
However, I do not want to just point a finger at a single reporter. This type of reporting looks like Business as Usual for AP about nuclear energy. 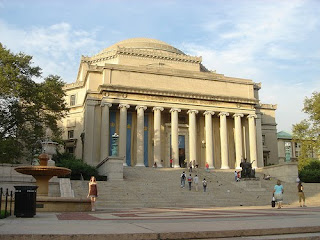 AP Reporting on Nuclear
The Pulitzer Prizes are awarded through Columbia University, and the Columbia School of Journalism is widely acknowledged as one of the premier schools of journalism in the country.
The Columbia Journalism Review (CJR) is a prestigious watchdog for good journalism. In the past three months, CJR has criticized two AP series for disorganized and slanted reporting of nuclear matters. In the first review, September 28, CJR first blasted the Nuclear Energy Institute for a heavy-handed response to the AP articles.. Then CJR got around to looking at the AP articles themselves.
But the AP series, while it tackles a critically important public policy issue, suffers from lapses in organization, narrative exposition, and basic material selection, what to leave in and what to leave out.....As a citizen reader with no particular background in nuclear power generation but residing less than 50 miles (the preferred safety margin, according to the AP report) from one of these old clunkers, I felt throughout like I was clinging to a pendulum, swinging wildly between “Uh oh” and “Phew, false alarm.”
Two months later, AP had an article about the consequences of Fukushima. On November 22, CJR reviewed the AP work on Fukushima.
Journalists often play up the dramatic and alarming aspects of the information they’ve found, and play down or leave out the ameliorative, neutral, or balancing aspects that might help do justice to the truth, but which could “weaken” the story. The AP’s article illustrates what this looks like.
Conclusion: when the CJR gives several negative reviews to a source for biased or confusing reporting on a particular issue, something is happening at that source. I think something is happening at AP. When I read an AP story about nuclear, I expect to see biased reporting.
Update: Canadian Energy Issues blog linked to this post and expanded on some of the themes. The title of their blog post is Why so much anti-nuclear sentiment at a time when the world urgently needs a major expansion of nuclear energy? It is being deliberately manufactured, by leading mainstream media vehicles like the Associated Press Thank you to Steve Aplin of Canadian Energy Issues.
---------------
Low Memorial Library at Columbia University, from Wikipedia.
In full disclosure: our son-in-law is a professor at Columbia, and several members of the family (including our daughter) hold degrees from that institution.
Posted by Meredith Angwin at 9:00 AM

Just once I would like one of these stories to mention that Strontium 90 can be detected in the skeleton of every animal in every corner of this planet because of the thousands of nuclear weapons that were detonated in our atmosphere during the cold war. But as CJR said, that might ameliorate (another word I need to look up) the OMG aspect of the story, so don't expect to see it included.

Meredith, thanks for the excellent research. It is depressing to realize that a lot of opponents of nuclear energy rely for information on media organizations like Associated Press that appear committed to disseminating misleading stories.

AP is doing a disservice to its readers and to the planet and humanity in general by going after nuclear energy, which is demonstrably the safest and cleanest by far of all the major electricity sources, and giving a pass to other, far more dangerous and dirty sources. Shame on them.

I wonder of Mr. Gram would be interested in picking a fossil-fuel power plant, and writing a story "Vermont Coal/Natural Gas Plant Has Continuous Radioactive Releases"? He could then scare his readership by contrasting the high releases of radioactive substances into the open environment from those plants compared to Vermont Yankee.

Just wanted to say thanks for another excellent post correcting the media. You may remember that the very first time I ever contacted you, I was looking for more info about the "radioactive leaks" at Vermont Yankee that I had heard breathlessly reported about in the mainstream media, and I expressed frustration that the coverage I'd seen provided no information about the quantities released or the potential threat to public health or the environment that this may or may not present.

It seems that nothing ever changes, does it? Anyhow, thanks again for putting the *full* truth out there where maybe at least some people can find it, including the numbers on how tiny these amounts of releases are, which the lazy/incompetent/dishonest (got to be one of those options) reported didn't bother to find out and include.

Any article about radiation which completely excludes any information or context about the amount/risk of the radiation is just fearmongering, and a terrible example of an article which leaves out *the most important information the reader needs*.

So, so, so aggravating.

Kudos Meridith – this FUD needs to be called out every time it raises its smarmy little head.

I’m curious as to whether you were able to forward your analysis to Mr. Gram or AP, and what the response was. Did they even respond to the CJR criticism?

I think I have Dave Gram's email address, because I try to get the email addresses of everyone who covers VY. However, I did not forward this to him. For one thing, I am still working on the second post. For another thing, people who are deeply interested in VY usually set a Google Alert for VY, and I am sure the reporters do so. So Gram would have seen my post.

In general, I have not sent links to my post to people mentioned. Maybe I should, but I think it would be scattershot...I only have some emails, for example. If they are interested in VY, they will see the titles and quotes in their VY Google alert. Also, after naming him in the post, I began calling him "the reporter." Because, in my opinion, it's not about Mr. Gram. It's about AP.

AP certainly saw the CJR articles, and have not answered them.