The UVM Film, Billion Year Half-Lives, and Coal is a Straw Man 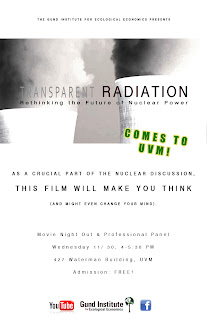 Last week, I attended the film Transparent Radiation at University of Vermont. The film poster is to the left. The purpose of this film was to show the negative side of nuclear energy, echoing the viewpoint of the filmmakers.
After the film was shown, there was a panel discussion. Howard Shaffer was on the panel. Shaffer blogged about the film and his panel experience at the American Nuclear Society's ANS Nuclear Cafe: Transparent Radiation--A Film: The View from the Panel.
Howard and I thought that I might blog at ANS later this month, perhaps my post would be The View from the Audience. In preparation for writing the blog post, I contacted the film director, Hillary Archer, and also a faculty member at the Gund Institute, Gary Flomenhoft, for further information and quotes.
The email conversation didn't go all that well. This was at least partially my fault. I am grateful that Archer obtained all the quotes I wanted. She was very gracious.
The Quote I Wanted
I emailed Archer that I wanted to obtain the quote about the how some nuclear materials had a four billion year half-life, because I loved that quote and I wanted to use it in my blog. She sent me the quote, but she also was very interested in why I loved it. Would I share my opinion of the quote?
After a bit of back and forth, I wrote Archer an email about the quote. Later I thought: Why let a good rant go to waste? I'll put the email on my blog! So here it is. I have edited it a little by removing a short paragraph that referred to earlier emails. I also include the entire quote from the film, as sent to me by Archer.
My Email to Hillary Archer
Hello Hillary
Thank you for the quote. I appreciate you sharing this and helping me be more accurate!
-snip-
You wanted my opinion of the quote, and I said that my opinion would be in the blog. I don't have an obligation to share my opinions with you before I even write them. I DO have an obligation to get the quotes right, and I have been working at that..
However. I will share my opinion of this quote, since it seems to be important to you. This quote shows a completely backward understanding of radioactivity and its dangers. It's the most perfect misunderstanding of radioactivity: half-life as scare story. During the film, I giggled during this quote. This whole business about protecting ourselves from U 238, which has been here since the planet was formed! It was very funny. U 238 is all over the place: in rocks, in coal, in the ocean. But these guys are going to hide it away, because it has a long half-life so it must be very dangerous. And somehow, nuclear energy caused it! Nope, the supernova that exploded and made the earth 4 billion years ago...that caused the existence of U 238! 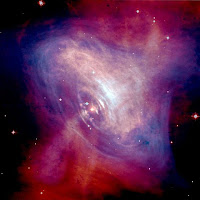 On to a little education about radioactivity. A long half life means an isotope is less dangerous. Think about it. Let's say you have a 100 atoms of an isotope with a half life of ten minutes. You can expect 50 radioactive decays in the first ten minutes. Short half-life, lots of radiation released quickly.
Let's say those 100 atoms are of an isotope with a half-life of ten years. The first ten years will have 50 decays, or one decay every couple of months. Long half-life, very little radiation released at a time.
This is why we can build a building of granite, which contains long-half-life radioactive materials. The long half-life means the granite isn't very radioactive. A 4 billion year half-life means very low radioactivity indeed!
It makes a good scare story, though. Be afraid. Be very afraid. It's gonna be radioactive for billions of years (as it has been already)! But to anyone with a bit of understanding of radioactivity, it's a giggle. 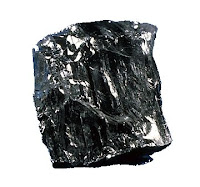 By the way, since you value honesty. Half of the electricity in this country comes from coal. Comparing coal and nuclear is not a "straw man," as Gary called it. You cannot dismiss facts by claiming: "that's a straw man." That is not honesty about energy.
By the way, I just found this today. Might be interesting...
http://nuclearaustralia.blogspot.com/2011/12/coal-1-fukushima-every-6-months.html
Thank you for sending me the exact quotes. I appreciate the quotes, and I appreciate the time you took to send them. I hope I have answered your questions. I have taken some time about it, and tried my best to answer.
Best,
Meredith
The Quote Itself
First, a note. The exact words in Gary Flomenhoft's email to me were: "I believe nuclear vs coal is a straw man argument." He likes neither nuclear nor coal.
Further, the quote I requested from the film Transparent Radiation. I thank Hillary Archer for providing the full text of the quote.
"Take a look at one of the most toxic wastes we produce: plutonium, one of the most toxic substances know to humans, half life of 23,400 years more or less. And that means half of it will be gone in that long, but it's so toxic we need to wait many many many half lives. There are other nuclear wastes that are extremely dangerous, with a half life of a million years; depleted uranium, a half life of four billion years- the life of the planet. So we have to keep track of these wastes, at the very minimum, many multiples of how long civilization has been around. Most likely for as long as the human species has been around or much longer." Joshua Farley from the film Transparent Radiation, 2011
---------------
Composite image of the Crab Nebula Supernova from Wikipedia
Coal image also from Wikipedia.
Posted by Meredith Angwin at 5:26 PM

I think a good analogy that just about anyone can get is an analogy to fire - fuel can burn hot and fast, but then it disappears in a short time and is gone. Or, it can burn very slowly - a candle, with relatively little fuel, even a small candle, can burn for *hours* because it burns so very slowly.

An isotope with a Billion+ year half life 'burns' very, very slowly indeed.

Those sort of isotopes are kind of like the ashes that are still sort of warm, and glow a tiny bit, at the bottom of a fire pit 3 or 4 hours after the fire has basically gone out, but aren't really burning in the sense of putting off any significant amount of heat or light.

As the director of this film, I have the mandate to clarify to readers of this blog post, the true purpose of this film was to provide a look at nuclear energy post-Fukushima through the lens of ecological economics - a perspective I feel has been left out of the conversation. Rather than side with pro- or anti-nuclear ideologies, my film aims to render old arguments transparent and empower new perspectives for our collective future. Two cogent, logical, and yes - negative - realities of nuclear revealed in the film are 1. that the economic argument for it has no validity and 2. no one has resolved the issues of nuclear waste.

Gary Flomenhoft did not comment on the blog, but he sent me an email saying that I had distorted his words. I do not want to distort his words, so I put his entire email here.

(By the way, I must have been upset, because the first time I posted this comment, I misspelled his name! I have it right now.)

Dear Meredith,
You have quoted me right, and completely distorted what I said. I don't dismiss the fact that more than half of the electricity in the US comes from coal, I am well aware of it, and have taught it for 8 years to students. You have accused me of dishonesty which is not true and I resent it.

In your previous message you said that if I was opposed to nuclear, then I must be in favor of coal. That was you putting words in my mouth, not my opinion. I said the choice between coal and nuclear (in the future) was a straw-man argument. The reason is that we don't need either one. But that logic escapes you.

This will be my last email to you.

Some comments on the comments.

My comment in my email to Hillary was about the straw man statement, not about Flomenhoft's honesty, and I apologize to Flomenhoft for any implication he received (and I did NOT intend) that he is dishonest. He is honest, and he is blunt, and I admire both qualities.

The business about putting words in Flomenhoft's mouth. I probably did. I was trying to get a clarification in an email string. The movie's emphasis on "conservation can close plants" and its general anti-nuclear tone, made me think that nuclear plants would be the first on the film-makers (and Gary's) list to close. In other words, I read the film as saying that-- if we achieved some energy conservation, the nuclear plants would be the first to close, and other plants could just keep running.

In a series of emails, Gary and Hillary made it completely clear that this was not the intention of the film. Reading Gary's recent email, above, he believes we don't need either coal or nuclear in the future. I believe that this is also the philosophy of the film.

"...So we have to keep track of these wastes, at the very minimum, many multiples of how long civilization has been around. Most likely for as long as the human species has been around or much longer." Joshua Farley from the film Transparent Radiation, 2011'

Er, I don't want to sound simplistic, but why babysit a dump? When was the last time you and your family visited a city dump -- one that's not even nuclear? What does it matter how vehemently rad waste is if it's dumped a mile deep cavern in solid rock or a dead volcanic shaft that won't see erosion daylight in a hundred million years? Why the frets over that? I mean it's not like anyone's going to be building condos down there any time soon! And I severely doubt it'd be worth anyone's while to try to steal stuff halfway to Hades like that. Gazeeks, people need to take issues in context and perspective!

Well written post by you, Meredith. Have a great day and walk on. Mary

Thank you, jeff and Mary and Jim! I do try for clarity.

I was thinking about the last line of Flomenhoft's email, about how the "logic escapes you." Sometime in the future, we may not need either nuclear or coal. We may have fusion, for example. But when? What's the transition plan? How long from now is "the future"? Right now, nuclear plus coal is 70% of our electricity, so saying "that logic escapes you" about shutting them down seems odd or something. It isn't logical to say that shutting down 70% of our electricity supply is a near-term fix for our problems.

When Ms.Archer invited me to view the film, long before it showed, she sent along the trailer. There it was, the horror of a 4 billion year plutonium half life. I replied that anybody that would use that meaningless fact to promote the film had to have an anti-nuclear agenda, since no responsible physicist would do such a thing. She objected, saying again that the film was "neutral". She also didn't much like the "tone" of my reply, sort of like the kid stealing a candy bar who doesn't much like the tone of the shopkeeper saying "Put that back!" At that point I lost interest in Ms.Archer's project.