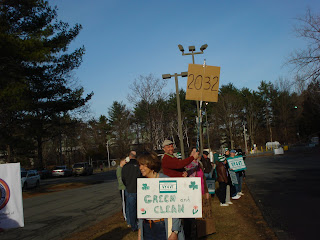 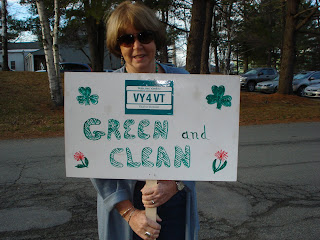 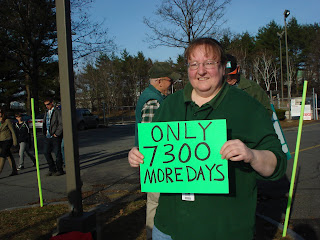 The Rally at the Plant Gates today went very well. The weather was wonderful, and we had the biggest turn-out ever: over 70 people! The homemade signs were terrific! People had a super time waving at cars at shift change, and chatting. Finally, we went in to the Governor Hunt house for a snack, including a cake with green trim, green icing shamrocks, and the message: "Green Power for 20 more years."
I am posting a few pix, but I really didn't take very good pix, so I hope to get more pix from others and post them. Here are a few pictures from near the beginning of the rally.
Smart Phones and Teenagers
The picture below deserves some explanation. It shows the Twarog family. They are wearing green hats provided by Howard Shaffer, and their son is concentrating on a smart phone.
Their son is helping me out. I had been on WPTZ TV Friday evening (the local NBC station) and WPTZ asked me if I could email them some pix of the rally by about 5:30 Saturday to be on the 6 p.m. news. And maybe I could email a video, too? They explained I could just send these from a smartphone, no problem.
But there was a problem. I don't have a smartphone. What to do? How could I get the pictures taken and sent to WPTZ for the 6 o clock news?
Of course, you already know how this story is going to end. At the rally, I asked a teenager. Cam Twarog took the pix, sent the pix, and obviously enjoyed himself doing it.
Everybody had a great time. 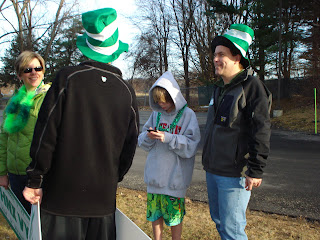 A tough week coming
The coming week looks like a tough one for the Brattleboro/Vernon area. Opponents have several sets of demonstrations planned for the day after the plant was "supposed" to shut down. The papers have also been full of calls for "direct action" to shut the plant down, and the importance of having taken the "non-violence training." (Nobody at our rally was violent, and we didn't need any training.)
Some of the talk at the rally was about the coming week. Many people had attended a Thursday meeting with the Vernon selectboard and police chief, talking about safety preparations for the upcoming demonstrations. Here's a Brattleboro Reformer article about that meeting: Vernon Gets Ready for VY Protests: Preparing for the Worst, Hoping for the Best.
We are glad we could come out and do our positive-energy rally at the plant today.
Update
I just added this short video. Thank you to the Twarog family for sharing