A Visit to Montpelier and a Crabby Public Service Board 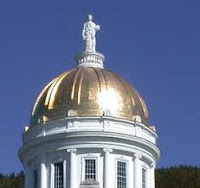 I just got back from the State House, where the Public Service Board (PSB) held a hearing about Entergy's Certificate of Public Good. The questions they asked Entergy ahead of this meeting were very negative, in my opinion. As I wrote in an earlier blog post:
"My first impression when reading the PSB questions was simple: Did one of the anti-nuclear groups write this memo? The questions didn't look like inquiries from an impartial board."
This morning, at the meeting in Montpelier, and the PSB asked all these questions but without promising any type of resolution. I guess that's a procedural meeting. I'm no lawyer.
As they asked the questions, the PSB was very aggressive toward Entergy. The board members took the stance that the approach of March 21 was Entergy's problem, not their problem. The PSB doesn't have to rule on anything by March 21! March 21 is Entergy's problem because Entergy didn't pursue the Certificate actively enough. (They said this often and sometimes with heavy sarcasm.)
Crabby
The PSB was crabby. I can use any word that fits the situation. (I'm a blogger, by golly.) Yeah, crabby is the word I will use. The PSB asked if Vermont Yankee was trying to look into their hearts to find their intentions, whether VY planned to sue again, etc. The crowd (mostly plant opponents) had plenty of occasions to smile at each other as PSB gave Entergy a hard time and asked sarcastic questions.
I don't think that judicial boards should be sarcastic. Maybe people can't help being crabby, maybe they spilled their coffee at breakfast, but they don't have to be sarcastic. In my opinion, this board was very unprofessional in its conduct today. As I said, I'm a blogger and I have opinions.
Listen to this VPR report to hear a PSB member assert that the "buried pipes" are the "gorilla on the couch." Really? That's the PSB's big issue? On the other hand, the VPR report ends with these encouraging words: Lawyers for Yankee and Entergy made clear that they're willing to go back to federal court if they conclude the state is trying to block the plant's continued operation.
Nobody Pushes Us Around!
The Attorney General (AG) and the Department of Public Service (DPS) filed a brief yesterday. They said the PSB should not attempt to shut down VY while the court appeals are on-going. The PSB was crabby about their action, too. The PSB chairman made a point of saying that the PSB is a quasi-judicial body and doesn't have to do what the AG and DPS wants them to do. That statement would have come across better (they are a quasi-judicial body, after all) if they hadn't been so out-of-control sarcastic the rest of the time.
To Be Continued
People were filing briefs yesterday and I can't find the briefs on the PSB website yet. More about this when I know more and have some of the most recent briefs.
Posted by Meredith Angwin at 2:55 PM

Did we get a workable, generic definition of reliability? One that isn't specific to Vermont Yankee but could apply, say, to a gas plant or a windfarm?

Sounds like a setup to me. They're greasing the skids to deny the CPG on political grounds, not anything related to reliability (hard to beat a 90+% capacity factor) or economics. The reference to the "buried pipes" is the smoking gun. That can only be an allusion to the tritium release, and that goes to radiological safety of VY, something the court has said is off-limits for the state to use as an excuse to deny VY operation. I assume the PSB must make public its reasoning for denying a CPG if that is what they do. If there is a denial and if it is based on anything beyond the purview of the PSB, I hope Entergy goes right back to the judge and gets him to slap them down again, this time with extreme prejudice, and file again for legal fee recovery. Maybe if they (Entergy) beat these clowns over the head enough times they'll learn their lesson.