When Did "Nuclear" Become a Four Letter Word? A guest post by Cheryl Twarog 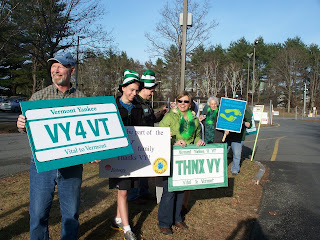 Cheryl Twarog is the wife of a Vermont Yankee employee. She's holding the THNX VY sign in the picture above, taken at the St. Patrick's Day rally. Twarog wrote this guest post about her recent experiences in energy education.
--------
At the St. Patrick's Day rally for Vermont Yankee I had a conversation with another mother, who happens to live near the plant. We talked about our firm belief that children should be taught HOW to think, not WHAT to think. We spoke of how we encourage our own children to learn the facts supporting all sides of an issue (yes, even nuclear power) before forming an opinion. It turns out that this was a timely discussion.
Last week an educator from a local utility company made the rounds in the elementary school where I work. She pays a visit each year for the purpose of educating the children about electricity. Topics include energy safety, consumption, conservation, and production. I have a lot of respect for her, as she is always kind, professional, and generous with her time. Every year I listen intently, waiting for her to at least acknowledge the existence of nuclear power. This seems to be one of those inconvenient facts that is conveniently left out of every lesson.
This year I inquired about the percentage of power that the company obtains from Seabrook. She politely directed me to the company's website. Well, after years of listening to her tout the benefits of wind and solar power, as well as the wonders of a Portsmouth plant that burns cocoa bean pods instead of wood, I decided to do a little more fact checking: "But you do have a contract with Seabrook?" She answered "Yes", then she continued on to say, "But we don't talk about 'that'. We only discuss the sources that are in the area."

Hmmm... First I was surprised that she referred to nuclear power as "that." Who knew that "nuclear" is a 4-letter word! Then I wondered how Portsmouth could be considered to be local, while Seabrook is not. I would have liked to see all of the facts given. It would have been appropriate to give a complete list of the types energy sources the company uses without cherry picking which ones to include or exclude.
As parents, we rightfully spend so much time and thought educating our children to be fair and analytical thinkers, so they can separate fact from fiction, rational thought from emotion, and science from politics. Maybe we should expect the same from the educators.
----------
Notes about the illustrations.
The photo at the top was downloaded (with permission) from the Vermont Yankee Facebook page album of the St. Patrick's Day Rally. I thank Vermont Yankee for letting me use the picture. It shows Cheryl Twarog and one of her sons and her husband (both with green hats). The man at the forefront of the picture is Bill Schulze. (I didn't know that man's name, but Michael Empey told me. Thanks to Michael! )
The map shows the Schiller biomass and coal plant at Portsmouth (orange balloon, above) and the Seabrook station (red balloon, below). Schiller Station is 150 MW, of which 50 MW is biomass. Seabrook Nuclear Station is 1,200 MW. The Vermont Yankee plant is near Brattleboro, at the left of the map (not marked with a balloon, sorry!) Many VY employees live in nearby towns in New Hampshire and Massachusetts. Clicking on the map will give you a clearer image.
Posted by Meredith Angwin at 5:39 PM