Intimidation as a Tactic: NRC Meeting on Vermont Yankee

Last week, the NRC held its yearly meeting to review Vermont Yankee.  I describe this meeting in my post today at the American Nuclear Society blog, ANS Nuclear Cafe.

My post is  NRC Public Meeting in Brattleboro: The Politics of Intimidation. 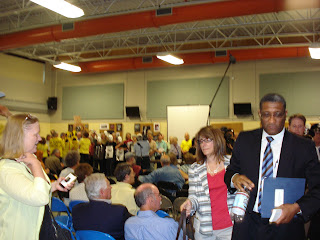 In the picture at left, NRC staff are leaving the meeting  while the plant opponents have taken over the front of the room.   There's a short video of this meeting at the post Planned Disruption at NRC Meeting. Full coverage is at the ANS blog.

Local Opinions On the Meeting

Newspaper op-ed: The Keene Sentinel wrote: Democracy is More Than Making Noise: "But we don’t share any belief that such protest performances will have constructive material effects, nor do we share the conviction by some participants that the disruptive tactics represent something larger than they are."

"Then about four years ago the NRC was here to tell us how great Entergy Nuclear Vermont Yankee was doing. I think it may have been another annual assessment meeting, and a dear friend tossed a handful of compost to the NRC delegates here...Swear words and compost are not toxic and they do not cause cancer like radiation can."

As we can tell from Sachs letter, nuclear opponents in Vermont embrace the politics of intimidation and feel justified in using them.  They have used intimidation for many years.

Disruption and intimidation. It works at some level.  Still, I can't imagine an undecided person watching this meeting and thinking:"Wow. these anti-nuclear people are right. They have convinced me.  I want to get out there and chant and shout too!"

Intimidation is fun, but it is not a convincing strategy.


Posted by Meredith Angwin at 6:59 AM

Having been to many meetings over the past 10 years, I note that the number of opponents attending is dwindling.

The issues are still relevant, and the NRC did a good job of responding to concerns.

We who believe in science and nuclear power as a conclusion of science, need to keep on reaching out.

I would like to see some commentary on public opinion in Vermont. Meredith reported that a recent poll found Vermonters were about evenly split on whether the state should force the closure of VY. How does this compare with earlier polls, and in polls taken in nearby states? Is public opinion perceptibly shifting? I live in a western state with mostly coal and NG generation, with a little bit of hydro. No nukes left, and as far as I know, none planned. The political situation in VT on this issue is really fascinating.

I can easily imagine the same type of people, in a nearby location 300 years ago, in a similar public gathering, shouting at some eccentric women, “Burn her! Burn the witch!”