Okay, I'm your friendly neighborhood pro-nuclear blogger, and this time I'm not writing about Vermont. Here we go on a world pro-nuclear tour! There were three pro-nuclear events, none in Vermont, and they don't get much attention in most of the media.

But, before we get started:

Something You Can Do Right Now

It takes almost no time to vote Yes on the question: Should the World Increase Its Reliance on Nuclear Energy at this Wall Street Journal poll. Do it now!

And the tour begins in Tennessee.

ANS members and ANS student members testified at a hearing about MOX fuel in Tennessee.  The Tennessee valley hearings are noted for anti-nuclear "zombies."  These are people wearing torn clothes and fake blood, and they come to hearings and make about as much sense as real zombies would make...if there were real zombies.

At this hearing, ANS members were informed, articulate and visible.  Many wore blue ANS t-shirts, visible in the picture at the left.  At the hearing, nuclear and anti-nuclear people spoke politely, and some even chatted and exchanged information after the meeting.

Oh yes, I suspect the zombies might have heard that the ANS members would be at the meeting, because....no zombies appeared. 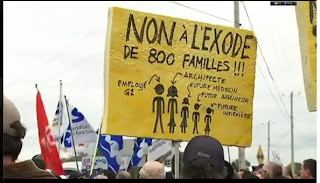 Hydro-Quebec owns the Gentilly-2 nuclear plant, and Hydro-Quebec recently decided to shut the plant down.  The people in the area did not take this quietly.  This Sunday they marched in favor of keeping the power plant open.  You can see pictures of the march on this pro-Gentilly FB page, which has over 1000 "likes": 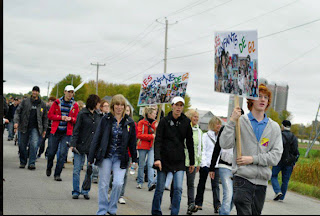 I am particularly fond of these pictures which I "borrowed" from the FB page.

One picture talks of the fate of  800 families, and two pictures are about the children  (Les Enfants) of Gentilly.

Les Enfants?  What is that about?  Well, there's a film about Gentilly which focused on birth defects, childhood cancer, and so forth, all supposedly caused by the plant.  The Canadian Nuclear Safety Commission wrote a one-pager about the falsehoods in the film. The one-pager is an excellent answer to many falsehoods about nuclear energy.

The young people in the parade and with their pictures on the poster are another answer to these falsehoods. 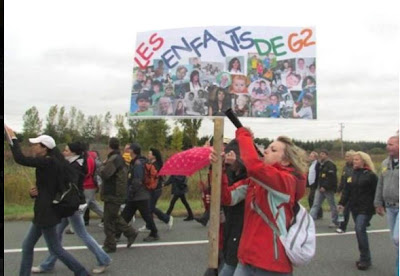 In the interview below, local officials speak of their support for the plant and the announcer says 1000 people are there for the march.

Well, this is NEVER going to get into the main media, I suspect.  But here's a 1000-person pro-nuclear rally in Japan, in front of the Prime Ministers house! It's only reported in somethng called The Liberty Web, but it happened all the same.

1000 people gather for a pro-nuclear power demonstration on Sept 25.  One of the spokesmen presented a statement to the cabinet, including these words:  “We have heard from the factory mangers that they have had to fire part-time workers, because the company took measures to save electricity. However, the victims of this policy could not speak up on account of the flooded denuclearization media coverage."

Not a demonstration, but a Japanese professor is battling the flood of mis-information in a letter and blog post. You can read Jun Takeda's post here.  Here's a quote:  Based on radioactivity dosage, the risk of Fukushima residents developing thyroid cancer is less than one person per 10 million per year. Since the population of Fukushima Prefecture is two million, thyroid cancer will not result from these low doses. Truly, people with only amateur knowledge of radioactivity need to stop paralyzing the citizens of Fukushima and the entire country with fear.

All Over the World

All over the world, people are standing up in public and supporting nuclear power.

The times they are changing, and it's about time.

Posted by Meredith Angwin at 5:12 PM