Cold Weather Winners and Losers on the Vermont Grid 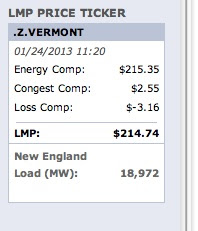 It's cold outside and it is going to stay cold.

It's not unseasonably cold: last night dipped to about fifteen below. On the other hand, the planting guides tell me that I should only buy trees and bushes that are hardy to thirty below.  So it's not that cold, by regional standards.

Still, it is cold.  Partially because of space heaters and so forth in these northern climes, the electricity  price on the ISO-NE grid is soaring.  The usual wholesale price on the New England grid is between $30 and $70 MWh (3 and 7 cents per kWh).  As you can see from the screen capture I took this morning from the front page of the ISO-NE website, the grid is now running more like  $200 MWh, or 20 cents per kWh.

Who wins and who loses (on the grid), when the temperature dips like this?

I would call Hydro Quebec a possible loser at this point. They are selling record amounts of power, as described in this article Hydro Quebec expects to break record for 2nd day in a row.   They are asking people to conserve and reduce consumption.

So, if they are selling so much electricity, why do I call them a loser?  Because they are not exporting as much electricity, and export to the U S is where they make money.  According to a tweet yesterday from Platt's (which I have not been able to verify, but Platt's news service is pretty good):

Hydro-Quebec is seeking voluntary demand cuts during peak hours Wednesday, Thursday; Weds exports to US fall to 800 MW from 1,400-1,500 MW

The lack of HQ power is probably one of the reasons that  the grid price in New England is soaring.

The Vermont contracts with HydroQuebec (HQ) supposedly smooth most of this type of spike in grid prices. Vermont doesn't have to pay top dollar to HQ when grid prices rise suddenly.  Still, HQ expects to make much of its profits from export. If you read the introductions to their annual reports, you can see them apologizing if they don't make enough money on exports.

HQ is exporting about half the usual amount of power right now. So they aren't making as much money as they would like to make. That's why I said HQ is a loser in this situation.

Yes. I know.  I can hear you all reminding me.  HQ did close the Gentilly 2 nuclear station earlier this month,  claiming they had excess power.  Oh well.  To quote Kurt Vonnegut: "So it goes." 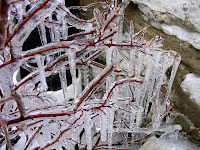 Every merchant generator (including Vermont Yankee) is a winner.  Look at those prices compared to their costs.  Wowee!

Most transmission and distribution utilities are losers in this situation   They are paying a lot for power on the grid, but they can't change their price-to-consumers to reflect this.  Months later, in front of their state regulatory boards, the utilities may get some kind of rate increase. For right now, I think they are hurting. They are in the position of losing money on every kWh sold, and trying to make it up on volume.

The more a generator depends on short-term contracts (not committed power) the worse off they are, in terms of the gap between cost of power and what they can charge the end-user for power.  Green Mountain Power boasted that they are able to get good short-term deals on the grid because they don't have too much committed power. That strategy might not look as good today as it does on some other days.

Revenue sharing is a "heads-you-win, tails-I-lose" agreement for VY.  If the price on the grid is low, VY just has to sell the power cheaply.  If the price is high, VY does not get the full benefit: the utilities share the money.

However, it is the agreement that Entergy made when they bought the plant, and they are holding to it.

If you listen to the last few minutes of the Federal Appeals Court hearing, you can hear the lawyer for the state say that these Vermont Yankee payments to utilities is a reason that the state needs to close the plant.  The hearing is embedded in my blog post State Claims Economic Reason for Closing Plant,

If Kurt Vonnegut were alive today, he could write something scathingly funny about the Vermont administration's attitude toward Vermont Yankee.  Unfortunately, I do not have his skills as a satirist.

This post has inspired posts on important related topics at other blogs.

At Neutron Economy, Steve Skutnik looks at natural gas.  Production price is not the only issue. Pipeline capacity is also crucial, and ultimately, limiting. Where's the real bottleneck for natural gas? Distribution.

Posted by Meredith Angwin at 2:30 PM

This is a great post an needs to be turned into a letter to the editor. A short one: How much did Vermont Utilities make from Vermont Yankee today? or something like that.

Thanks for this Meredith, I fought against the closure of Gentilly, by trying to educate people, but when you are convinced that all nuclear is evil, without any basis in science, you are surely to loose. I blogged for a long time in Quebec about energy, made a conference on energy and nuclear. Now I bought a Geiger counter and documenting that radiation is everywhere around us and not evil. http://radio-activity-studies.blogspot.ca/

I retweeted this post, I put it on facebook, doing what I can. You have nuclear friend of north, hope you know that!

I will consider this post one of the best anniversary gift I got for my birthday tomorrow!

The twitter post brought a question from one of my followers, would be nice to blog about it... How much coal was burned to compensate the closing of Gentilly (not selling to US) and how much radiation sent in the air and on the ground, because we all know that burning coal produce more radiation than a well maintained nuclear power plant.

Thank you all for your comments!

Mike: what is past is prologue. Continued low prices for electricity depend on continued low prices for gas. The ISO-NE report shows local gas prices have risen from below $2 MMCF to above $6 in about 9 months. Grid prices are going to follow, in my opinion. I am aware that predicting the future is risky, but I think gas prices remaining so low is extremely unlikely.

Howard and Simon: your comments started my morning SO WELL! Thank you!

Simon, I have to run off in about ten minutes, but I have asked some people about your "G-2 closing and carbon footprint" question and I hope someone will answer it soon.

Meredith, With less nuclear power to rely on, HQ has less power to export. Let's do the math. Closing the Gentilly-2 plant cut power generation capacity by 675 MW. HQ has reduced power exports by 600-700 MW. You think these are related?

Thank you for all your comments.

Bob, you are completely correct, and others have figured this out also. On my FB page, one Canadian described the people who shut down G-2: "Morons."

Kind of sums it up.

I need to do another blog post on this, but meanwhile, there are two other blogs continuing the conversation.

According to the Energy Information Agency (which is very good at reporting what has happened and less reliable at predicting what will happen in the future) natural gas prices in New England have exceeded $30 per MMBTU for the past week or more.

Gas prices are so high that the report even indicates that oil might be burned instead.

Meredith,
Well, the natural gas prices is severely damaging the nuclear industry...much like the Iraqis, Iranians and Saudis were during their price war years of 1980-1990.

And we got a corrupt collusive energy market throughout NE both with electricity and natural gas. Have you had those massive reductions in your electric bills as the market has seen?

Rod, thank you for the cost update. I have also followed with interest the back-and-forth comments between you and Steve Skutnik on his blog post at Neutron Economy. Exactly how much did you guys bet on the natural gas prices, anyway? You win if you count New England prices, he wins at the Henry Hub. I have found this contrast very interesting.

Mike. People ask me all the time: "So if the grid prices are so low, how come my electric bill hasn't changed?" My answer: because the utilities have NO incentive to lower their prices unless forced do so by Public Service Boards. Those Boards (and Commissions and so forth) are supposed to look out for the consumer. They don't. They are falling down on the job, IMHO.

I have a follow-up question about Gentilly-2 and the seemingly dumb decision to close it.

What I mean is this - in the world of business finance, it occurs to me that it might be worth it to "lose" a short-term windfall (e.g. temporary demand spike for power during the winter), in order to save costs the other 9 or 10 months of the year.

Keeping a power plant (or any business) open entails a lot of costs, and the profits you make in a couple months might easily be swallowed up by the operations costs to keep the plant around?

Also, it occurs to me that there might be excess demand this year, but maybe they know that because of generation capacity scheduled to come online either in Canada or the US during 2013, that there would end up being surplus power by NEXT winter, and so they decided it made sense to close the plant (although, if that was the case, you'd think they'd keep it open until like March, get those "windfall" profits, then close it)?

Things aren't always so simple as they appear at first glance, is all I'm saying.