The week of January 14, there are three different hearings about Vermont Yankee in three separate courts and on three separate subjects.  It is the Week of Living Lawyerly.

What: Federal Court of Appeals Hearing on State and Entergy Appeals 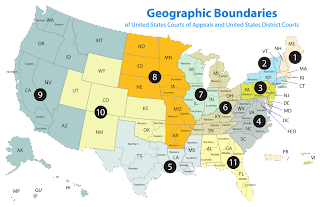 Where: 2nd Circuit Court of Appeals (in New York City)

Why: Judge Murtha ruled in favor of Entergy in the main federal case, and the state appealed the ruling. The state mainly challenged the part about pre-empting nuclear safety issues.  Entergy also placed two appeals before the circuit court.  The first appeal was about spent fuel rods, and the second appeal was about the NEC suit in Vermont Supreme Court.  This second appeal is discussed below, in the Supreme Court section.

What is at stake: In the main issue, whether the Circuit Court will (or will not) uphold the Murtha ruling.

The Circuit Court calendar shows that both side have a full fifteen minutes each to present their cases.  This length of time seems to be standard for arguments before this court.  I am not a lawyer, but to me, this means that the written material in the docket is the important material.

In terms of the Entergy appeals,  Murtha granted the first appeal, and has just recently turned down the second appeal (about NEC and the Vermont Supreme Court).  I blogged about the turn-down of the appeal against the NEC case in  Hot Potato Continued.

What:  Hearing on NEC Request to Vermont Supreme Court

What is at stake, part two:  If the Supreme Court were to issue an order to close down Vermont Yankee, everyone expects Vermont Yankee to appeal to federal court.

I blogged about this subject extensively in Hot Potato, and Hot Potato Continued. I think that this case is a hot potato that the Public Service Board wants to throw to someone else.

UPDATE: I have put the November 29 Public Service Board statement and the Entergy request for dismissal on a new Vermont Supreme Court filings page at the Energy Education Project site.

What: Hearing on Certificate of Public Good for Station Blackout Diesel Generator Docket #7964

What is at stake: Will Vermont Yankee be allowed to install a new back-up diesel generator?   Vernon Dam will no longer be considered a Black Start facility by ISO-NE. (I blogged about this in Black Start, Black Out and Diesels, Some Clarity) Since the dam will not be maintained as a Black Start facility, the NRC will no longer consider it to be qualified as a Station Blackout back-up facility.  (The dam is still there, of course, and Vermont Yankee still has a direct line to the dam.)  So Vermont Yankee needs a new station black-out back-up facility.  In most cases, this would be a stationary diesel generator.

What is at stake, part two:  In most cases, getting a new back-up diesel for a power plant would be a slam dunk.  However, the Public Service Board is concerned that if it grants a permit for this piece of safety equipment,  Vermont Yankee would continue to operate.

Wait! Whoops!  That was snarky of me.

Of course, I meant to say that the Public Service Board is concerned because

Normally, the Board would not consider a petition from a company that is not in compliance with existing Board orders, unless that company also demonstrated an intent to come  into compliance. Entergy VY has not indicated such an intent here.

That's a quote from the order, and you can read the entire Public Service Board order setting up the diesel-docket here.

It is important to note that "non-compliance with Board orders" basically means...the plant is still operating, after March 21, 2012, while hearings are on-going.  The Board has several dockets about the Certificate of Public Good, and the Board claims that, according to one of the dockets, the plant is not in compliance because a new Certificate of Public Good has not been yet been granted by the Public Service Board.

Posted by Meredith Angwin at 4:23 PM

With regard to the PSB hearing, I'm puzzled by the quoted paragraph. Which existing Board orders is this in reference to? Certainly the PSB should not be expecting adherence to orders that have been overruled in court, and the Certificate of Public Good - originally applied for in plenty of time - is still under discussion.

Well, I read the order all the way through, and I'm not much the wiser. It seems the PSB has dropped any pretence of professionalism or objectivity, and has embarked on a corporate sulk. Footnote 4 is simply beyond belief - "a [new] CPG would not necessarily cure the current non-compliance"? Ridiculous.

The only valid point I might have conceded to the PSB would be the need for an expedited hearing, but given past performance, perhaps 8 months is only just enough time for them to come to a decision.

Joffan. Thank you for a great question.

Entergy had asked the PSB to ignore the previous dockets in terms of assessing the CPG, and this order (linked above) was the PSB answer. This answer is what led NEC to file suit in Vermont Supreme Court.

I mean, the PSB started a new docket to start clean, but then they decided they could still use the old dockets as a way to whip Entergy for not being in compliance. That's my opinion of their actions, anyway.

Joffan. I agree with you.

I am a blogger, I have opinions, I have a blog (among other reasons) in order to share my opinions.

The reason I said "no comment" on the diesel hearing is simple...some things just leave me speechless. It would be hard to share an opinion without profanity.