Blowing in the Wind: Threats and Reactions 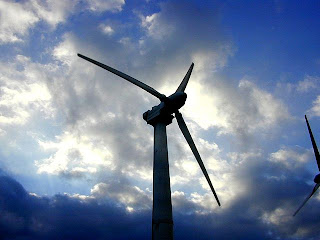 Threats and Defiance on SB 30

Senate Bill 30 would mandate heightened environmental oversight for wind energy projects.  It would require such projects to undergo Act 250 permitting: Act 250 is Vermont's tough land-use law that was put into effect in the 70s, when it looked as if Vermont would turn into one vast ski resort.

In the post Comments or Threats: Wind in Vermont, I described how a wind developer (Jeff Wolfe of Gro-Solar) wrote an open letter to John Campbell, President Pro Tem of the Vermont Senate. Wolfe said that:  if you support this bill, not only does that support end, but I will help recruit and support opposition to you in the next election, and will put my money where my mouth is. Wolfe also said that Campbell was falling for (the) lies, deceits, fake science and name-calling of the Koch brothers.

The political analyst at the Valley News, John Gregg, interviewed Campbell after he received this letter. As Gregg wrote: Campbell... said Wolfe “has publicly threatened me and tried to intimidate me to vote one way, and I think it would send a bad message” were he to change his vote.

Comments from the Editors

The Valley News is a mostly-liberal-leaning paper. It ran an editorial against this attempted intimidation: Hardball in Vermont: Environmental Fight Turns Nasty

The first paragraph includes: Jeff Wolfe delivered an unmistakable message to state Sen. John Campbell of Hartford that the game being played is hardball — or maybe moneyball.

Later in the editorial: Indeed we haven’t seen yet a convincing case that large-scale wind energy can play a significant role in reducing carbon emissions in Vermont, which would be the only rational basis for sacrificing a landscape that plays such an important role in the state’s economy and self-identity.

The Ethan Allen Institute (sponsor of the Energy Education Project that I direct) is a free-market think tank, and no fan of the strict Act 250 reviews.   They wrote: Green thuggery/ hypocrisy rears its head.

In this editorial,  the Ethan Allen Institute suggests that Vermont amend Act 250 to exempt  ANY endeavor in any field in which Vermont would, in fact, like to see more jobs.  They also wonder what would happen if an ordinary large company (as opposed to green-renewable company) threatened a House or Senate leader over a piece of legislation?

As noted above, Campbell thought it would send a bad message if he changed his vote after this letter. In a recent article by Andrew Stein at Vermont Digger, Campbell went further. Campbell delays S.30 vote until Tuesday, citing Wolfe's threat, desire for full Senate vote.

“Quite honestly, because of that letter being put in Digger … if I don’t vote on this thing, it looks like I actually paid attention to this threat that was put forward,” he said. “I just won’t do that. That’s everything that’s wrong about the system.”...

Campbell told VTDigger that because of Wolfe’s comments he feels “it’s imperative” that he votes on the bill.

This week, Campbell is presiding over the the Senate for Lt. Gov. Phil Scott who is away, which means Campbell can’t vote on the bill unless there is a tie.

Campbell is delaying the vote on this bill until he can actually vote on it.

(Note: there's a fascinating  comment section on this article.  One comment claims that though the Senate may pass the bill mandating Act 250 oversight, the House probably won't pass it.  Stay tuned, as they say...)

---------
Monday Morning Update:  I want to share today's op-ed by  Annette Smith, a Vermonter who has been campaigning against Big Wind for many years. The title says it all: Respecting our Communities and Environment.  She also has some interesting comments on what is likely to happen in the Vermont House (all the action now is in the Vermont Senate).

Posted by Meredith Angwin at 9:41 PM