David Hallquist is the Chief Executive Officer of the Vermont Electric Cooperative (VEC).  Like most co-operatives, VEC is owned by its rate-payers.

Once upon a time, VEC was the third-largest utility in Vermont.

This afternoon, David Hallquist sent me an email including some VEC talking points.  I asked if I could use them as a guest post on my blog. He graciously agreed.

But first, a few words about VEC.  VEC takes its responsibilities quite seriously, including:

A recent VEC blog post Adoption of Renewable Energy Requires Realistic Timeline, shows the utility's thoughtful approach.  Late last year, the VEC Board of Directors asked the legislature to put a hold on requiring new renewable mandates in the state.

This afternoon, Hallquist sent me two documents that were very interesting.  One I already had: Matt Wald of the New York Times on the soaring prices of natural gas In New England: A Natural Gas Trap.  Hallquist also sent me the talking points below, which expand on the Wald article and look further toward the future.

These talking points are the way VEC sees the grid situation, right now. 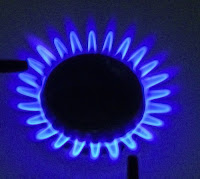 Concerns about the Effect of Natural Gas prices on Electric Rates

Vermont Electric Cooperative’s power supply portfolio is designed to provide stability and predictability of short and long-term power supply costs. VEC keeps a small portion of the portfolio open so that some power can be purchased on the open market.  Recent unexpected and prolonged high price levels in the wholesale energy markets has caused concern that underlying issues may cause future market volatility that could ultimately have a negative impact on consumer electric rates. 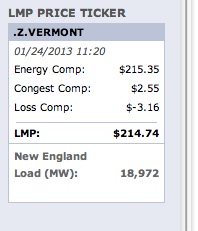 Wholesale electricity prices skyrocketed in mid-January through the end of February:

This made sense in late-January as the Northeast was experiencing its worst cold snap since 2009.  What did not make sense is that the prices did not come back down when the weather moderated.  The prices finally came back down on February 24.

Natural gas prices have been high due to an increase in demand, at a time when New England’s supply is constrained:

Natural gas and wholesale electricity prices have returned to normal levels, but future volatility is expected:

Further exacerbating the problem are the ISO operating procedures that are curtailing the production of lower cost, intermittent renewable energy generators:


Posted by Meredith Angwin at 8:17 PM

Here are ISO-NE grid prices for January, 2013. The blip was temporary. Most utilities do not buy much energy on the spot market.

Thanks for the info. Will share as well. Our town Monkton, VT is being threatened to be forced to accept a natural gas transmission line for the paper mill across the lake. Now deducing it is for the bilateral flow through of gas. Use our pristine town to regulate their supply between Canada and NY. Skip all of us in town. After reading this, maybe better to stay off the natural gas anyway. It is hard to keep up with the complexity. The town was told the pipeline would go through our neighbors garden and 150 feet from his house. No map to date. This info adds to that and starts to add up more. We must question a large non local company with the Vermont name.Have a great weekend. Mary

Thank you both for the comments.

Willem, your second link shows a rather prolonged double-blip.Most of the recent contracts (with HQ anyway) have been market-follow-with-smoothing. I have no information on what "with smoothing" means, but I think even a utility with a such a contract would be affected by any price rise that lasted this long.

Mary, I think we need more gas pipelines in this area, in general. But I also think they should be for OUR benefit, as well as benefitting others. Gaz Metro may not have published a map because they are aware that speculators can buy the land they plan to buy and then raise the price. But I think people need to be informed, and informing people is more important than saving money for Gaz Metro.

Also, if you remember an earlier blog post of mine, Gaz Metro has arranged for ratepayers in Vermont to pay for the pipeline. Gaz Metro is not using its own funds to build it.

I would argue that the peaking power plant needs a slice of the pie to keep running. Since backup is needed, the consumers have to pay for two supply networks. The oil plant must be paid at a high rate to compensate for its low use. This does, of course, support the nuke, which can run 24/7, especially during your appalling winters.