Mellow Meeting of NRC in Brattleboro 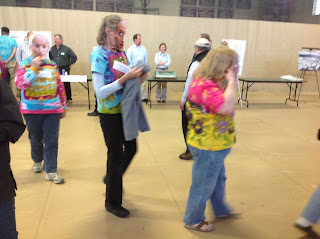 Last night's NRC meeting about Vermont Yankee was relatively mellow.  The meeting took place at Brattleboro High School, and was lightly attended.  The first part of the meeting was a science-fair set up, in which people talked and looked at exhibits. As  you can tell by the two pictures, there weren't many people there.

As they did last year, the Shut It Down Affinity Group (aka Raging Grannies) came in again, wearing costumes and masks. Once again, they walked single file around the room.  I hope you can tell (despite my lousy photography) that they were wearing tie-dyed shirts and wore masks of former NRC commissioner Jaczko.

Later, when the more formal presentation was supposed to start, the women once again stood behind the NRC people. The women refused to sit down, and delayed the start of the meeting. They read long letters and repeated quotes from Jaczko about how all nuclear plants must be shut down.

However, unlike last year, the crowd did not swarm up and surround the NRC people in solidarity with them. (There wasn't much of a crowd, anyway.) So the Jaczko impersonators  eventually sat down and the meeting proceeded.

Vignettes from the meeting

Being Friendly: During the open house, Cheryl Twarog (plant supporter), Mike Mulligan (plant opponent) and myself had a very friendly and upbeat conversation about children, the Navy, where we grew up, high school experiences, and so forth.

Aside: My husband was a baby during WWII, but later served on a destroyer (a "tin can"). I remember urging Cheryl and Mike (both associated with Navy nuclear) to read this book about destroyers in a major battle in WWII --  The Last Stand of the Tin Can Sailors.  I also recommend it to the readers of this blog.

Being Unfriendly:  During the meeting, a woman with a heavy German accent (I don't know her at all) gave the usual anti-Vermont Yankee spiel, including lots of comments about Fukushima.   She ended it with the question: "How did you [addressing the NRC people] ever become so contemptuous of other human beings that you encourage nuclear power?" (I didn't record the question, but this was the gist of it.)  At that point, the NRC people began talking about what happened at Fukushima and what we have learned. She interrupted them to say: "I had ONLY ONE question: how did you became so contemptuous of your fellow human beings?" This woman sure had an advanced case of self-righteousness!

Update: My blog post on the meeting is up at the ANS Nuclear Cafe today: Speaking Out of Turn at the NRC Meeting.  The post is about how I spoke out of turn, and how that helped the meeting get back to order.

----------
One of the people in masks was kind enough to stop and pose while I took a picture, but I did a bad job of taking that picture, and so it isn't on the blog. I apologize.  My camera is old and is getting unreliable.
Posted by Meredith Angwin at 12:19 PM

I need to take the pics---was in Brattleboro on a bus trip on monday. I love taking pics of crazy people.

Holy cow; don't we all sound and look like normal people when in person?

Mike,
You are right. We are mostly all normal people!
I love the science fair part of the meeting because people actually talk to each other.
Meredith

I am much more complicated than being pro and anti nuke. I didn't respect the extremes with either sides.

Both sides mostly don't trust me cause I won't swollow their Kool-Aid......

Standing behind the NRC people is still very disrespectful and I don't know why the meeting organizers put up with it. They are giving these lousy bums a forum for acting out their pathology. They should sit respectfully in the audience and speak when it is their turn. As many meetings and forums I have been to in my 60+ years on this Earth, I have never, ever stood in the space of those in charge of the meeting or disrespected them even if I didn't agree with their positions.

She interrupted them to say: "I had ONLY ONE question: how did you became so contemptuous of your fellow human beings?"