The Right Side of History and Pandora's Promise: Guest post by Angwin and Cravens 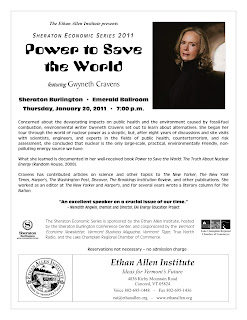 Nuclear power supporters are on the right side of history.

In supporting nuclear power, we can appeal to facts, and  we can also appeal to emotion.

I am pleased to have two comments from We are not Spock: Emotion and Nuclear Power available as guest posts on this blog.

I am also happy that Pandora's Promise, a documentary favorable to nuclear energy, will be shown on CNN tomorrow night at 9 pm Eastern time.

What a perceptive and thoughtful essay this is! And there are many reasons to feel sad about a nuclear plant closing; you do a good job of listing some of them.

One more: the shutdown of Vermont Yankee is a victory for the fossil fuel industry, which does not control its unhealthy pollutants the way the nuclear industry does.

Gwyneth Cravens is one of the stars of Pandora's Promise.   She is the author of Power to Save the World, which describes her journey from protesting nuclear power to supporting nuclear power.  Cravens visited Vermont in 2011 and spoke in Montpelier and Burlington, in favor of nuclear power and Vermont Yankee (illustration is the poster from her Burlington talk).

But emotion has a part in this debate. We on the pro-nuclear side are entitled to draw attention to those whose lives will be affected negatively by the closure, including the employees whose jobs are lost and the wider world whose lives will be less prosperous and healthy.

Those who want to close nuclear power plants choose declining prosperity and a deterioration of our environment. We should keep saying this. We are on the right side of history.

Michael Angwin is currently the Chief Executive of the Australian Uranium Association, which is now merging with the Minerals Council of Australia. On this blog, I described how Michael Angwin won a nuclear debate in 2012.  That was my first introduction to Michael Angwin, who is undoubtedly distantly related to my husband, George Angwin. Both of them have roots in the St. Just area of Cornwall. 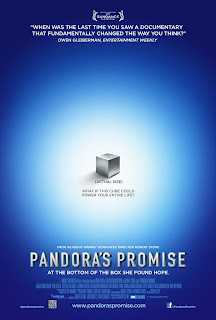 Tomorrow night, Pandora's Promise will appear on CNN at 9 Eastern, 8 Central time.   This documentary interviews leading environmentalists, including Gwyneth Cravens. They describe their journey to supporting nuclear energy. It's a world-wide project, including footage of Fukushima and of areas of the world with high natural background radiation.  I urge you to watch it.

Unless, of course, you are reading this blog in Europe, where the TV stations have refused to air Pandora's Promise.  Will "banned in Germany" get the kind of excited response that banned in Boston used to inspire?  Watch  the movie and decide.

Pandora's Promise--showing that supporters of nuclear energy are true environmentalists.


Posted by Meredith Angwin at 9:48 AM