Reasons the Public Service Board Should Approve the CPG for Vermont Yankee: Guest Post by Guy Page of VTEP 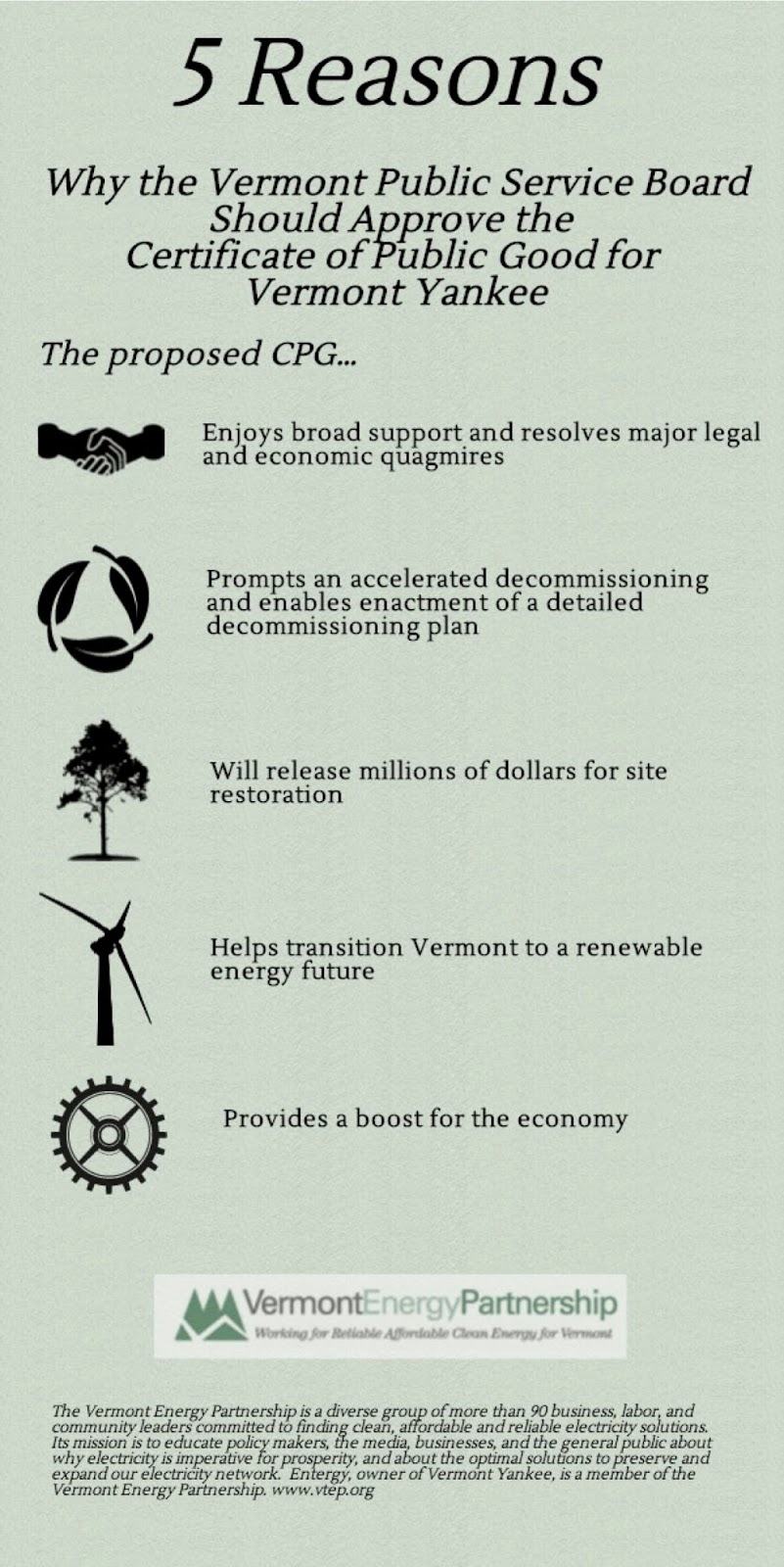 A Settlement Agreement announced on December 23, 2013 by Gov. Peter Shumlin, Attorney General William Sorrell, the State of Vermont, and Entergy recommends that the Vermont Public Service Board (PSB) approve the Certificate of Public Good (CPG) for Vermont Yankee to continue to operate until the end of 2014. The plant’s continued operation through the year will help to ensure a smooth transition of Vermont Yankee to a closed, decommissioning power facility. Without approval of the CPG, the Settlement Agreement will likely be nullified. The following are five reasons why the PSB should approve the CPG by its deadline of March 31, 2014.

Both the State of Vermont and Entergy support the Settlement Agreement and the CPG. Without a CPG, the Vermont Yankee situation will revert to the pre-December 23 status of expensive legal wrangling, job uncertainty for plant employees, no cash for economic development or renewable power, and no agreement on decommissioning.

3. Will release millions of dollars for site restoration

Within 30 days of the issuance of the CPG, Entergy has agreed to establish a separate site restoration trust fund with an initial deposit of $10 million.  This is the first installment of $25 million that will be provided by 2017.

Within 30 days of the issuance of the CPG, Entergy has agreed to contribute $5.2 million into the Vermont Clean Energy Development Fund, with half of this money earmarked for the benefit of Windham County.

5. Provides a boost for the economy

The Vermont Energy Partnership (www.vtep.org) is a diverse group of more than 90 business, labor, and community leaders committed to finding clean, affordable and reliable electricity solutions.  Its mission is to educate policy makers, the media, businesses, and the general public about why electricity is imperative for prosperity, and about the optimal solutions to preserve and expand our electricity network.  Entergy, owner of Vermont Yankee, is a member of the Vermont Energy Partnership.

Infographic from VTEP, used by permission.


Meredith Angwin's earlier post on this subject is The Proposed Entergy Settlement is Good for Vermont.

Posted by Meredith Angwin at 8:11 PM

Well, part of me wants to be a contrarian and maybe hope that the wacko PSB will turn down the CPG. Maybe that will let Entergy off the hook for paying the Danegeld the state is trying to extort out of them. Maybe Entergy can use those funds to help the families whose lives are being destroyed by closing this plant and putting their employees out on the street. There is a lot of Danegeld being paid here, and paying extortion is usually not a good thing. Sorry if that sounds harsh, but someone needs to step up and tell it like it is.

I assure you, I have thought the same thing sometimes. I concluded, however, that if the PSB doesn't grant a CPG, the situation could end up with Entergy shutting the plant early, rather than going to court to fight the PSB.

In other words, my calculations are that if the PSB doesn't grant the CPG, the plant workers will be laid off even sooner. The over-all Settlement is good for the state (Danegeld), and an MOU based on the Settlement would be good for the workers. That is why I am in favor of it.

That said, I have occasionally had the same thoughts that you expressed.

The problem with paying Danegeld is that once you have paid for the Dane, you can't get rid of the Dane. Extortion seldom ends when the payment is made. It just invites more extortion whenever the opportunity arises.

Yes, the plant would probably shutdown immediately after the CPG was denied. But, my point is, that would let Entergy off the hook for paying the extortion if the State doesn't hold up its end of the bargain. Maybe the Danegeld that would then be paid to the state could be used to help the employees who are being financially ruined. IMO, the loyal employees who have worked for Entergy are more deserving of payment than political thugs.

Don't kid yourself by thinking they'll hand out more money (if VY shuts down early) just 'cause.

They're currently saving money, through attrition. Do you see anyone's retention agreement being modified based on the attrition savings?

IF Entergy really cared, wouldn't they be spreading those savings out to the loyal one's who stay.

There may be more overtime being handed out as people leave, but how does that compare to the cost of keeping employees through the end. Not only are you saving by not paying the bonus or their normal wages, there are hidden costs to employing someone. They have to pay for your health benefits, you 401k, possible severance, and other hidden taxes.

At least you could make the argument that they'd have those funds to pay to their employees rather than paying Danegeld. We know for a fact that if they pay the extortion to the state, those funds are gone forever from the company. There is no assurance they would pay them to the employees either, but the last people I would want to be paying are those who are cutting my throat. I just don't see the fairness in paying extortion to the state who has cost me my job. They don't deserve a reward (extortion) for doing that.

Meredith, those "green" builders are at it again, if you want to take a look. They claim that solar cells can load follow. I read that one reason the Japanese chose boiling water reactors is that the output can be adjusted like turning up a radio. Is the reason VY is a GE reactor is so that it could be adjusted to demand? Another question someone wrote is that they were trying to get away from an oil furnace. Guess what the answer was, a mini split heat pump with electric backup heat and an electric water heater. Oh, and is it true as they say that they can add a Vermont Yankee every year of solar panels? That sounds like hype to me and its kind of an insult to my intelligence.

Robert, as far as "replacing" the output with solar panels, it is worth noting that while VY is a bit on the "small" side as nuclear plants go, for the entire year of 2013 VY generated more electricity than all of the solar panels and windmills in the states of Vermont, Maine, Massachusetts, New Hampshire, New York, Connecticut, and Rhode Island combined. Not to mention that the energy from VY is steady, continuous, and reliable, unlike the solar panels and windmills.

Anonymous, do you think that there is enough electricity with VY not there to not have blackouts/brownout? Especially if people buy electric water heaters and ranges? Also, if VY is small do they adjust its output or does it run flat out most of the time?

Robert, my guess is that there will not be blackouts/brownouts because the politicians will browbeat the suppliers and grid operator to do whatever it takes to keep the lights on (without VY) because they know the sheeple will scream bloody murder if there isn't electricity when they want/need it. They know (or will find out soon enough) that windmills and solar panels can't carry the load. So they'll import more megawatts from Hydro Quebec or Ontario Hydro, pipe in more gas, or burn more coal, whatever it takes. That will give the APPEARANCE that VY was not needed. This is how it always is done and is being done right now in Germany as we speak. Yes, Vermont can get by without VY, but at a price of polluting the atmosphere and acidifying the oceans, and just being more dependent on outsiders to provide what they need. Such a fine legacy for a state whose history formerly was one of independence, self-reliance, and concern for the environment.

Robert, as far as VY being able to load follow, BWRs can do that more readily than PWRs, but my understanding is that some of the newer PWRs can also be set up to load follow. You typically don't do that because they generate lots of cheap baseload power in a constant manner, so you have a fixed refueling schedule and can calculate fuel burnup a little more reliably than if output is variable. BWRs have inherent load following capability because you can control power by doing things like adjusting the recirc flow rate. But in principle all nuclear plants can do it, its just better and easier if they don't and you let other generating assets on the grid do the load following. This is one of the downsides of "renewable" power. You either have it or you don't (either the sun is shining or the wind is blowing, or it isn't). If you have it, you'd better use it if you can, but it may not match the load demand. Intermittent power sources drive grid operators nuts. I know. I've been in the dispatch center when intermittents are dropping out or popping up. It makes for a chaotic situation to manage.

Without Vermont Yankee, the ISO has to find another 500-odd megawatts of generation during peak demand periods... and the fuel to feed it.  The New England gas pipelines were already oversubscribed in last January's cold snap.  They will run into pipeline limits sooner, and draw more deeply from whatever reserves they have.

It's too much to hope that Schumlin winds up hung from a lamp post on a meathook, but a lot of New Englanders are going to have their eyes opened in the next winter or three.