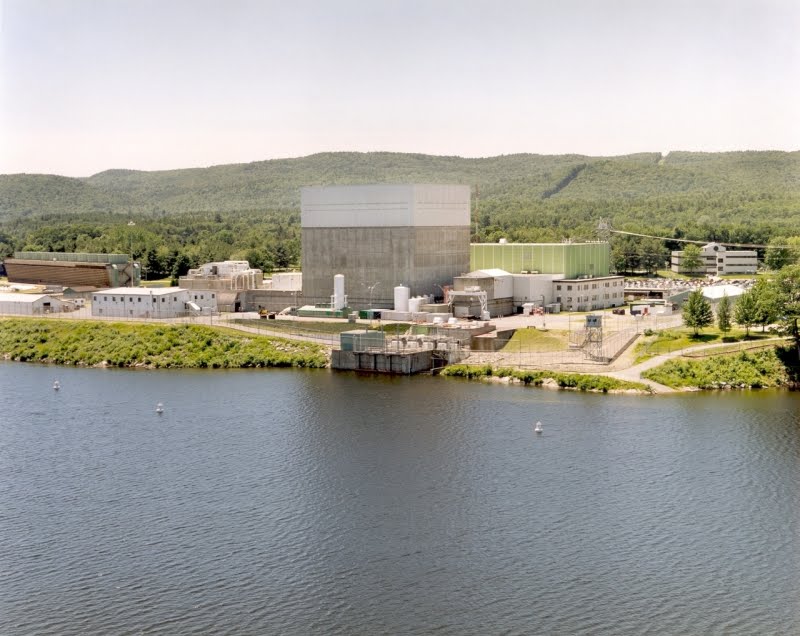 The NRC requires careful control of the maximum radiation dose at the site boundary of a nuclear power plant.  For a non-specialist like myself, the NRC document 10 CFR Part 20 is not easy to interpret.  Plus, power plants in Vermont must meet even more stringent state requirements.  To explain the situation, I will quote a  Vermont Department of Health press release on site monitoring at Vermont Yankee:


The U.S. Nuclear Regulatory Commission limits radiation doses for the general public to 100 millirem per year. The limit set by the U.S. Environmental Protection Agency is 25 millirem per year from radioactivity in water, air and soil. The Vermont Department of Health limits are more restrictive – 20 millirem per year.

In other words, the plant-caused radiation at the site boundary in Vermont must be less than 20 millirems above background radiation, total, per year. Indeed, the radiation at Vermont Yankee plant boundary is at a such a low level that it  cannot be measured easily and reliably, except by specialists.

To resolve the conflict between the Entergy measurements and the Vermont measurements, Entergy engaged Oak Ridge Affiliated Universities (ORAU) to do a third set of measurements.  ORAU has a group that specializes in radiation measurements. The local opponent groups objected to this choice.

The opponents' main accusation was that ORAU was part of the industry and could not be trusted.  Another accusation was that hiring ORAU was a way to fool Vermont citizens into thinking that Entergy had hired Oak Ridge National Laboratory.  (ORAU is basically part of Oak Ridge National Laboratory. It's complicated, and has to do with the difficulty the government has in hiring temporary employees, graduate students, etc. )

Meanwhile, the opponents objections to ORAU and the measurements were not mild-mannered. There were shouted accusations.  I saw a man from VPIRG completely blindside an Entergy employee at a public meeting. The Entergy man on the panel had no idea that the contract with ORAU was going to lead to shouted accusations of being a liar.  It was a sad sight.

However, the Entergy measurements were correct.

The report concludes that the measurement methodology used by the Vermont Department of Health since 1973 was less accurate than current methods used by Vermont Yankee.

And yes, here's another quote from the same report:

At no time has the dosage from the Vermont Yankee plant posed a measurable risk to public health.

A great deal of money and energy was spent on the boundary-line dose issue, and nuclear opponents took every opportunity to humiliate people from Entergy about the measurements and the contractor.   But what did it all mean?  What was accomplished?

I encourage my readers to share their own ALARA stories.

Posted by Meredith Angwin at 5:04 PM

I'd repost it in the NY and LA Times sites and the Washington Post myself if I'd permission and your credentials to make it more legit to them. I wonder what their replies -- if any -- would be to you! But the fanaticism of the anti-nukes to demand such excessively stringent Japanese-style radiophobic standards! They should take the nearest train south to Grand Central station and hear those counters tick away from all that granite zapping hundreds of thousands of commuters daily! Rad limit ratings anyone?

Keep up the great job!

Hi Meredith, great story but I believe there was a bit more to the store. As I recall, the Department of Health issued a new Rule that changed the regulation so that 1 millirem was not the unit of measure used to demonstrate compliance for site boundary dose. Instead, they changed the rule so that the new regulation used the roentgen as the unit of measure. A slight change in name but in essence it restricted the site boundary dose to approximately 60% of the millirem unit of measure.
The 20 millirem limit is one-fifth of the federal standards (100 millirem) and the lowest in the country. The new rule which took effect back in 2010 I believe, changed the standard from 20 mrem (which it had been since the 1970's) to 20 milliroentgen ("mR"). See Final Rule § 5-305(D)(I)(e). This resulted in a change in the regulatory exposure limit for the VY Station. A mrem is not equivalent to a mR. Therefore, the change in the direct gamma radiation limit for the VY Station site-boundary from 20 mrem to 20 mR resulted in an actual reduction in the allowable dose at the site boundary of approximately 30% to 40%.
In simple terms, a roentgen is not equivalent to a rem. A rem is
about 0.60 times that of a roentgen.

James
Thank you! Every time I visit my daughter in NYC, I think about the igneous bedrock under the city. I should be terrified, right?

Millerm,
Thank you and good idea. I should join SARI.

Anon
I remember that! Insisting on roentgen, not rem! Thanks for reminding me.

The boundary line measurement "controversy" started before I began serious blogging, so I don't have my own good records on it. But I remember the "shouting Senator" (you know who I mean) yelling about it. He dismissed all of health physics as "fudge factors" and it was all just another way of "lying" to him about radiation. He was "tired of being lied to!"

We've got quite a crew around here, don't we?