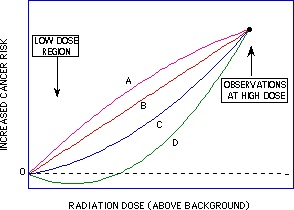 Recently, three distinguished scientists have filed an NRC petition, asking the NRC to re-visit the radiation protection rule-making which is based on the Linear No Threshold (LNT) assumption, and the consequent ALARA (As Low As Reasonably Achievable) rules.

I posted about this yesterday, also.

Here's the petition in the Federal Register. The comment period is open until September 8, so you have a few days to file your comment.  Please comment.

Update: The comment period is now open until November 19.  (Yes, it surprised me, also.  See the third page of this pdf.)

I support these petitions to base radiation protection on science, not on the assumed linear relationship between harm and dose.

There are very few biological systems that have linear responses between levels of dose.  For example, selenium is both a dreadful poison and an element necessary for life and reproduction.   The effect depends on the dose.  It is not a linear straight-line relationship in which selenium is always harmful but gets more harmful as the dose gets higher.  At low levels selenium is beneficial.  At high doses, it is harmful.

Similarly, the effect of radiation on biological systems is not straightforward.  People living in the mountains, or on granite bedrock, have no more cancer or birth defects than people living with less background radiation.  There is some evidence that radiation is beneficial at low doses: for example, recent experiments in which low doses of radiation extend the life of fruit flies.

Whether or not this type of effect (hormesis) is present for humans is still unclear, in my opinion. But it is clear that, at normal background levels at least, a little more radiation does no harm. The linear-no-threshold hypothesis is unproven, useless, and unreasonable.

What the linear non-threshold assumption (for that is all that it is) has done is simply add to expense and anxiety. It leads to ALARA, which is very bad rule-making.

Imagine that all regulations were based on ALARA.  Let's say my town water supply meets all the criteria for purity that such water supplies must meet.  I could go to my select board and insist that they lower the concentration of a certain contaminant by 50%.  They would say that the town supply met all the requirements for water purity.  I would respond that they are being unREASONABLE.  With an ALARA-regulated water supply, if they CAN lower the concentration REASONABLY (and I get to decide what is reasonable), they are required to do so!  It doesn't matter that the water is already safe to drink.  If they were just willing to spend more money, it could be even…well, not safer, but certainly more expensive water!

In short, ALARA must be rescinded.  The very word "reasonable" is unreasonable.  "Reasonable" according to whom?  How much money is it "reasonable" to spend to achieve yet-lower results? And whose money gets spent this way?

Society has many problems and limited resources to address these problems.  I recently read an article showing that NOx (nitrogen oxides produced in combustion processes, and a precursor of ozone and smog) can hide out in soot deposits and re-emerge later, in a more virulently active form.  Perhaps cleaning the soot from city buildings might make city air more wholesome! http://www.bbc.com/news/science-environment-33970233

We have many real gains in public health available, if we can spend the money.

Spending money on radiation ALARA (make it lower and lower and lower) is completely unreasonable.  Unless you are prepared to decide to evacuate Denver for its high background radiation, I hope you will stop insisting on regulation according to LNT and ALARA.

Would you care to have this added to this week's Carnival of Bloggers?

Yes, I would. Thank you.

I heard American Nuclear Society (ANS) President Eric Loewen speak about the damage that ALARA wrecks upon the nuclear industry. He then acted to compile a library of information on ALARA and LNT. I studied this information library and have personally concluded:
1) ALARA is extremely expensive for nuclear plant designers including decommission activities where costs have spiraled upwards due to radiation protection efforts. When measured against risk, these radiation protection efforts are a huge waste, and wasteful activities will eventually fail.
2) Humans have evolved in the presence of radiation. There is logic and study to support the idea that at some low level, radiation is good for you.

ALARA and LNT must now be replaced.

Not just "humans have evolved in the presence of radiation." Every living organism that uses potassium (are there any that do not?) and in particular the fruit of trees that require more of it in their fertiliser, if you want more fruit, is exposed to constant low level radioactive bombardment from isotope 40_K, and has been so since time immemorial.
Furthermore, the fruit is the stuff that carries the genes to the next generation.

Meredith,
This is well written and understandable logic. Thank you!

Just in case you need to know, the best news I have read is at http://transatomicpower.com
It is a variant of the quite successful steady state breeder, Molten Salt Reactor design using zirconium hydride as moderator, not graphite. Hydrogen nuclei are a better moderator than carbon, and of course ZrH is solid. They propose to continuously remove fission products, but especially the neutron poisoning xenon and krypton. By their calculations,it needs only 1.8% enrichment, which means that the actinides in "spent" LWR fuel suffice, once the fission products in it are removed.
By my reckoning from their figures, a thousand of their 520 MWe design could be fueled with the 65,000 tons of "spent" fuel that "Blue Ribbon" committees would vitrify, bury, and waste! The total capacity of such a fleet could replace all the coal burning, most of the gas, and oh for pity's sake, no more wind turbines or bird frying solar concentrators.
The same principle is expected to be perfectly well able to use thorium in fluoride form as the fertile material.