Carbon taxes and the Fitzpatrick plant: a reason to sign the petition 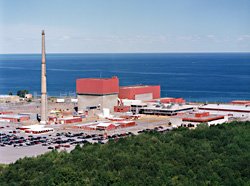 I encourage you to sign the petition to show support of Fitzpatrick.  More signatures will be a good thing, wherever the petition is addressed.

Some of the people who signed the petition also left comments.  I was particularly struck by a comment that noted that many states are considering carbon taxes.  If carbon is taxed, that will increase people's electricity bills. If Fitzpatrick is not running, and most of its power is made by natural gas plants, there will be an increase in people's electricity bills.

I decided to do a quick and dirty calculation of the amount of money Fitzpatrick will save New Yorkers…if there is a carbon tax.  Here's my calculation, and my sources.  I invite comments and corrections.

How much energy:
Fitzpatrick makes 838 MW of dependable capability. Source, Entergy Nuclear.
There are 8760 hours in a year.
I assumed a 90% capacity factor, which is on the low side for the nuclear fleet.
At that point, we have 838 MW x 1000 kW per MW x 8760 hours per year x 0.9 hours operating per year, and we have

Saving how much carbon:
Okay, now, what if that power was produced by a gas-fired plant?

This number is an average for gas-fired plants, and no doubt someone will come up with a lower number, with the assumption that only bright shiny new combined cycle plants should be counted.  Since these shiny new plants would still only be part of the local fleet of gas plants, I will stick with my number.

Next, let's look at money.

In terms of carbon taxes:
Carbon taxes. This is where it gets a little tricky. There are plenty of carbon tax bills introduced, often for as much as $40 per ton.  However, that feels a little theoretical for me.  I can't find a place where a carbon tax is really that high.

So I went to a website that compares carbon taxes, world-wide, and came to the conclusion that $20/ton, as in British Columbia, was a number that I was more comfortable with using.

At $20/per ton, this would be $79,942,183 dollars paid in carbon taxes, by the citizens of New York, to support the natural gas power that would replace Fitzpatrick.

In short, if the state of New York is serious about reducing carbon dioxide and saving money for all ratepayers, a modest amount of support to Fitzpatrick is in the interest of everyone in the state.

(And that doesn't even count the well-known volatility of natural gas prices. Natural gas won't be cheap forever.)

So, your action is simple:

And, if you live in New York, contact your state legislator and your congressman.


Posted by Meredith Angwin at 2:36 PM

FWIW, a Department of Energy paper claims that capturing carbon from an advanced natural gas combined cycle plant would cost $83 per avoided ton of CO2, far more than the $40 and $20 dollars per ton taxes in this post. http://www.netl.doe.gov/KMD/cds/disk50/NGCC%20Technology_051507.pdf

The savings in carbon fees would have paid for around half of the costs for standby fuel supplies in the New England grid... which might not have been needed if VY and the rest had stayed on-line.  The top Greens are bought, the average environmentalist is duped, the public is being sheared.

Meredith, another way of looking at this is the cost per kw-hr. Using your numbers I get just over a penny a kw-hr. So for someone using 750 kw-hr per month, that's an extra $8 on their power bill, or say an additional $100 every year. An increase like that hurts the most for people struggling to get by -- a regressive tax. Of course it hurts businesses too, especially those using lots of electricity. And who gets hurt when businesses cut back? Again, those who can least afford it. Electrical service can be a great equalizer, raising the living standard for everyone. The nitwits in public office today seem not to appreciate that.

The Energy Information Administration website has the actual output for every power plant at this link:

From the dropdown menu, select "Plant Level Data" and enter the name of the plant where it says "search all fields."