Photovoltaic Feed In Tariffs in Germany and this country 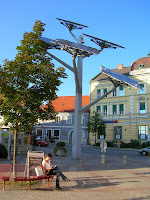 Wow, $68.8 to build something which, when you average out the capacity factor (around 9.5 percent), provides the energy of like 1 nuclear plant? For $68.8 you can build what, about 6 nuclear plants?

I did a bit of math, and I come up with that same amount of money buying you about 7 times as much power if you build 1.2GW Nuclear Plants for $12 Billion (I do not include interest on the loan cost of the plants, as I do not believe interest is being included in the figures for the solar power - trying to compare apples to apples here, as much as I can).

So, here's the math I did to arrive at that conclusion:

Total GW 'nameplate'capacity for the solar power panels installed at the end of 2009 (per the article above): 9830MW

Capacity factor for solar given by article: .095

If a nuclear plant costs 12 Billion, then 68.8 Billion can buy you:

Looks to me, like all those people who claim that nuclear is too expensive, are sure giving a 'free pass' for Solar PV.

I'm not sure the above really does justice to the difference in cost between Solar PV and Nuclear would be. I do realize that the numbers would certainly be a little bit better in a place like, say, Arizona or Texas, but in a place like Germany, or the northern States of the U.S. (which I believe are at sort of similar lattitude as Germany, and similar climate). At the same time, I believe that Solar PV panels tend to have a life span of like 20 or 30 years? Whereas Nuclear Plants typically operate for something like 60 years. On the other hand, Nuclear plants have fuel costs, waste management costs, and operational/maintenance costs which PV do not have.

Still, it looks to me like it would be plausible to assume that since the Nuclear Plants last on the order of 3x longer than the PV panels (if that's correct), and they are, by all accounts I've read, very cheap to operate once built we could take that 6.6 figure above, and say multiply it by 2.4 (multiplier to account for the fact that you'll probably have to replace the solar PVs 2.5 times over the life of the equivalent nuclear plants), and you're looking at capital costs which are about 15.8 times greater than equivalent nuclear?

How is nuclear 'too expensive', again?

Jeff,
Your comment is much appreciated.
I have made similar calculations in other articles.
See our website