The Inconvenient Truth about Vermont Yankee: Without It, Vermont Would Use Fossil

On the ISO-NE (grid operator) profile page on Vermont you can see generation capacity fuel mix compared for Vermont and New England. (You can double-click to see it larger.) 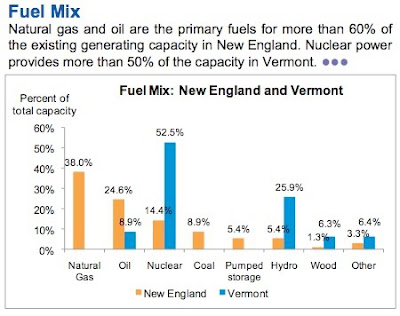 ISO summarizes the situation very well, with the note that 60% of the electric capacity in New England comes from natural gas and oil (both imported from other regions) while over 50% of Vermont's electrical capacity comes from a nuclear plant. Yes, nuclear fuel also comes from another region, but we are talking truckloads every eighteen months, not pipelines to carry gas and oil.
Note that this is fuel mix by plant capacity, which is a little confusing. In this chart, it looks as if we use almost half as much power from in-state hydro as we do from Vermont Yankee. Actually, according to a somewhat out-of-date Department of Public Service electricity information chart, Vermont gets 35% of its kWh (power, not capacity) from Vermont Yankee, 28% from Hydro Quebec, and 9% from in-state hydro. However, since hydro has a relatively low capacity factor compared to Vermont Yankee, hydro capacity is prominent on the ISO-NE capacity chart for Vermont.
Vermont is truly blessed with in-state hydro. It was the basis of the early industrial revolution here: all those water-driven mills.
Looking at Actual Kilowatt Hours: When the New England Nuclear Plants Refuel
The installed capacity information shows that Vermont is not about gas and oil. Let's leave capacity, though, and talk about actual power produced (kWh).
Recently, I obtained a very interesting chart about this. Dave Lamont of the Vermont Department of Public Service (DPS) was kind enough to send me a copy of an October presentation on the Sustainability of Vermont's Energy Future. This is a Department of Public Service document and it is in the public domain. I find the DPS site confusing, so I have mounted the Sustainability document on my meredithangwin.com website to make it more accessible. You can download it by clicking above.
This chart shows the sources of kWhs in New England throughout the year in 2008. Look what happens when the nuclear plants go off-line for refueling. You can see it easily. (Once again, you can double-click to make the chart larger.) The nuclear refueling outages are very clear. There's Vermont Yankee going for a refueling in the October/November time frame. The yellow area (nuclear) drops. The green (renewables) and the black (coal) don't change. Hydro changes with the seasons (more water in the spring) but doesn't take up the slack of the nuclear outages. Yes, that's the blue area, the gas area, expanding with the outages. Just as you would expect.
Less nuclear means more gas-fired generation.
The Potential for Big Bucks to Oil and Gas
With Vermont Yankee continuing to run, we Vermonters are not doing our part for the oil and gas industry! As Rod Adams said (quoted in an earlier post on this blog)
A 720 MWe gas plant will burn 110 million cubic feet of natural gas every day, even if it is a super efficient plant operating at 60% thermal efficiency. That much natural gas, even at today's relatively low price costs nearly $500,000.
But that half-a-million-a-day to the natural gas companies would be only the beginning. Nobody expects gas prices to stay so low. We have never seen natural gas prices stay low for a long period.
Another picture, from ISO-NE again, tracks natural gas prices over time in New England. Electricity prices track natural gas prices. I suspect the more natural gas you have in your generation mix, the closer the tracking. The tracking for New England is pretty tight.
Vermont with its nuclear, in-state hydro, and HydroQuebec has been somewhat of an exception. That may not continue. (Once again, double-click to see a bigger graphic.) 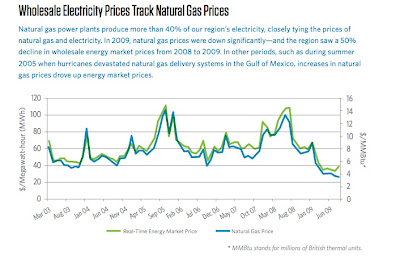 How much does natural gas cost, and how much will it cost in the future? I looked up natural gas on Bloomberg, checking the New York City Gate Spot. The spot price I found was $3.71 MMBtu. When you check it tomorrow, it will be different. Another site, Trading Economics, gives prices at the Henry Hub in Louisiana over the last twenty years. This site is very interactive, and you can play with various parameters. It is worth noting that in the last ten years, gas prices have seldom been below $4 for very long. If you factor in the gas prices of the nineties (not adjusted for inflation) the median is around $4.10.
The Inconvenient Truth
Vermont has a generating capacity profile quite different from that of New England. We don't have 60% imported gas and oil and 9% coal generation capacity. That's the average for the grid as a whole. Instead, we have Vermont Yankee.
However, when nuclear plants go off-line for refueling, fossil fuel use goes up and natural gas and oil plants begin raking in money. If Vermont Yankee were to shut down and we got "power from the grid," we would be buying fossil fuel power.
Also, greenhouse gas credits are bought and sold within the Northeast through the Regional Greenhouse Gas Initiative. Vermont sells these credits now. Without Vermont Yankee, we would buy these credits from other states. That would be an added cost.
That's the inconvenient truth. Without Vermont Yankee, we would be running on fossil. We might buy more power from Hydro Quebec, which would charge us "market" (fossil) prices for the electricity. But mostly, we would be running on fossil.
Inconvenient, but true.
Posted by Meredith Angwin at 7:37 PM