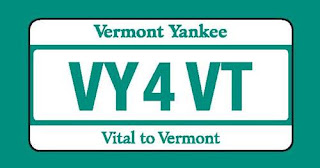 Off to a Good Start
On Thursday night, September 30, we held the first meeting of the Energy Education Project at the Montshire Museum of Science in Norwich. We had a nice turnout, more than twenty people (not including the speakers). This was great for a rainy night in this area, especially because I felt I had done only a so-so job of announcing the meeting.
I was pleased to see that a couple of people came because of an ad I had put in the local paper. I wasn't sure if advertising would be effective or not. It was effective. Also, we were lucky that Mark Morgan, a local cinematographer, volunteered to record the meeting. We hope to have parts of the meeting on YouTube soon.
The meeting started with John McClaughry, acting president of the Ethan Allen Institute, introducing the two speakers: myself and Dr. Robert Hargraves. The Energy Education Project is part of the Ethan Allen Institute.
Grid Reliability
I spoke first. Basically, there's a paradox about understanding the grid and Vermont Yankee's role in grid reliability. Therefore, I talked about ISO-NE (the grid system operator) and how the grid is managed. The paradox is:
However, while Vermont Yankee is only 2% of grid capacity, there would be a reliability problem with shutting it down. That's because Vermont itself is only 4% of grid load. In other words, if you "act locally," VY is essential for grid stability in the southern Vermont, southern New Hampshire area. I have posted a pdf of my slides at the Energy Education Project website.
The History Of Vermont Yankee
Bob Hargraves updated a talk he gave this spring to the Hanover Rotary club. Bob told the history of Vermont Yankee, and the near-impossibility of replacing its power with renewables. Do Vermonters really want to devote twice the acreage of the Green Mountain National Forest to tree farms for biomass? Are 250 huge wind turbines on the highest ridges a good idea? Bob's somewhat updated presentation is available at the Ethan Allen website.
The Ethan Allen website version is a pdf, so you can scroll through it quickly. For the full story, however, you might want to listen to the earlier Rotary Club version, which has a voice-over.
VY 4 VT
Howard Shaffer and I are used to distributing material we have copied by ourselves. Fighting to keep clean air and nuclear in Vermont has been a self-financed business. Recently, Entergy has woken up a bit, and now provides people like us with lawn signs. We had a bunch to give out at our meeting. The signs were lovely (picture above) but rather big. To my delight, ten lawn signs went home with people attending the meeting. People who are pro-nuclear are serious and enthusiastic. In the past, pro-nuclear people had few places come to meetings, hear interesting talks, pick up lawn signs, or eat chocolate chip cookies.
Further Plans
We have more events planned at the Energy Education Project: Check out our website.
While you are there, click on the PayPal button. Membership is $30 a year, and it means a lot to the future of energy in this country. And thanks to those who have already joined!
In October, the Energy Education Project has three events planned, and more in the works.
Hope to see you soon. And if you can't come, donate! 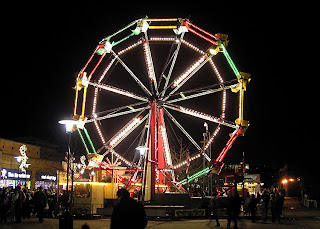 Carnival of Nuclear Energy
The 21st Carnival of Nuclear Energy is up at Next Big Future. Is the Sierra Club is for nuclear? They used to be shills for natural gas, but that may be changing. The first thorium molten-salt reactor is on track to be built. And the taxes in Germany...well, let's face it. Nuclear makes profits, and profits are targets.
Always something new at the Carnival!

Posted by Meredith Angwin at 5:02 PM

Why can’t you get the truth straight.

Mike.
I attempt to be truthful and professional in this blog. I interview people and quote my sources. I link to documents and web sites. You merely make an assertion, and then ask an insulting question about why I "can't get the truth straight."

If you have information that I haven't found, please send a link to the information or a quote from a regulation.

Basically, if you participate in the fruits of the NE ISO this year, you are required to participate in the standby market three year hence. If you can’t meet you futures the commitments, either you got to make power or pay somebody else to be in standby or spinning reserves. Look it up?

Basically the ISO is saying, you have to participate in the three year spinning reserve auction...

Any thing else is gaming the issue by Entergy of the NE ISO for their buddy VY.

Mike. Repeating the assertion with the statement that I should "look it up" is not sufficient. When I looked it up on the ISO site, the newspaper reports, and conversations with regulators, it was clear that Entergy was allowed to drop out of the auction...and that ISO was allowed to order Entergy to stay in. If you looked up something different, you need to give a reference, as I said before.

Arguing about NE ISO rules does nothing to change the fact that the south Vermont, West Mass, south NH area (without VY) is a transmission backwater.The further the load from its source, the more reactive electric power becomes, with amperage and voltage growing ever-so-steadily out of phase with each other,meaning transmission lines heat up, and less and less percentage of the power is usable..... and meaning that the distant source Mr. Mulligan claims "Entergy could just pay" will have to generate significantly more power at the far end, creating carbon debt, stealing power from distant consumers, leading to a far greater chance of breakdown, & blackout (as well as costing much more).


Yes, Vermont could simply contract with providers in New Jersey, or Minnesota, or Mexico for that matter, but what would be bought would be unreliable, poor quality power unable to support the accustomed needs of Vermont's customer base. Nearby generation is what is needed. Clean, carbon-free local generation has just one source---VY.


And yes, NE ISO could lease banks of filthy marine diesel makeup units, hide them in the backwoods somewhere, ( See: http://bit.ly/DIESELL ) and pretend they don't exist....... as the Vermont sky begins to resemble the sickening blue haze over Los Angeles, and folks downwind realize the stink will never go away in their lifetimes.... because coal is unthinkable, wind is aesthetically horrendous, solar is a poisonous pipe dream (manufactured in China), and local hydro is maxed out. And oh, yeah, you could clear-cut the Green Mountains. That might get you about 8 years of biomass. ( See: http://click2.info/2384 )


The "Greener Madness" driving the antinuke hate, is basically emotional & illogical. Twisting, turning, evading reality, those in the grip of Greener Madness ALWAYS miss the forest, while jumping from nitpicking lie, to impossible evasion. Methinks I might spy a case of it here.

The private NE ISO is an extraordinary secretive organization...they make veiled statements all the time that verges on fiction. They are not accountable to any community.

The issue is about Entergy meeting it financial grid reliability commitments...not about the need of VY for reliability. Then everyone spun it into a save the VY campaign.

It is clear you can’t contradict my statement with a reference from the ISO? I just don’t understand why the NE ISO didn’t fine Energy for not spending enough money to keep VY reliable...to keep VY with a pristine public relation image assuring VY has a future.

You being a highly educated person with advance degrees are taking advantage of a person who never went to collage.

Mike. I am sorry you see me as taking advantage of you. That was NOT my intent. I was simply saying that if you know something I don't know, please share it with some references. That's all.

Your view and my view of VY's reliability are quite different. But that is no insult to either of us.

Mr. Murphy. You are correct about this business of "getting power from somewhere else on the grid" that opponents of VY often quote. Line losses are a significant issue.

The issue is absolutely about the need of VY for reliability. The reason VY was not allowed to "delist" in the most recemt forward capacity auction is that ISO had done some preliminary studies which indicated that reliability issues in the southern VT/New Hampshire area would be more severe with VY not in service.
http://www.iso-ne.com/nwsiss/pr/2010/fca4_filing_release.pdf

ISO is continuing to study the issue and will release its updated findings sometime in December.

I did reference that ISO report in some earlier posts about how the ISO wouldn't let VY drop out of the 2013 bidding process. I should have referenced it again. It's important.

Thanks again for the link.