The Twenty-Fourth Carnival of Nuclear Energy: The Economics of Energy. 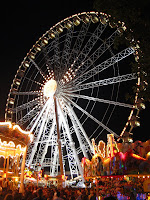 The 24th Carnival of Nuclear Energy
The latest Carnival of Nuclear Energy is up at Idaho Samizdat. Dan Yurman puts together a terrific compendium of posts, many of which deal with the economics of energy. Some of the links include:
Solar Versus Nuclear: This fall, a Vermont Law School adjunct professor Mark Cooper wrote a widely-ballyhooed study "showing" that solar is less expensive than nuclear. Mr. Cooper holds a Ph.D. in sociology. You might remember that study. It's the one the New York Times wrote about...and then had to apologize for the imbalance and mistakes in their article. The New York Times explained what it should have done to review the study, but that was not equivalent to a real review.
Today's Carnival links to Solar Cheaper than Nuclear, Think Again! in MasterResource, a free-market energy blog. This post does a masterful job of deconstructing the shoddy arguments made by Mr. Cooper. There were several major errors, such as forgetting about the subsidies when talking about solar economics, taking Cooper's own original flawed paper as an authoritative reference, and so forth. Worth reading for anyone interested in energy economics.
Obama Versus Nuclear? Yes, President Obama supports nuclear energy, but Charles Barton of Nuclear Green gives him an F for energy policy, while Jim Hopf at ANS Nuclear Cafe hits the exclusion of nuclear from Renewable Energy Standards. Some improvement required, Mr. Obama. Let's see a better report card in a few months.
Gas Versus Nuclear: The Carnival linked to my recent post on the Conservation Law Foundation and its mutual support of Natural Gas Plants. I also highly recommend Rod Adams post on natural gas and nuclear at Calvert Cliffs, in Rod's home state of Maryland. As Rod points out:

Once they begin to run, the ongoing cost of fuel and operators (for a nuclear plant) is quite low compared to other alternatives. Each new 1600 MWe EPR displaces a need to burn about 300 million cubic feet of natural gas each day. At today's "cheap" natural gas prices, that amount of gas would cost $1.2 million per day, but once gas prices return to the levels that existed in 2008, that amount of gas will cost almost $5 million per day. In comparison, the nuclear fuel for an EPR costs about $190,000 per day. Power companies can lock in nuclear fuel prices for many years into the future if desired.

In other words, it's the same story in Maryland (Calvert Cliffs) as it is New Hampshire/Vermont (CLF Natural Gas plant versus Vermont Yankee). Don't be fooled. There's big money in being "non-nuclear." Gas money.

Irony Alert
Peter Shumlin's has made endless attacks on the "pollution" caused by Vermont Yankee. As I noted in earlier posts, he makes up his own facts, including saying there is strontium in his neighbor's wells (there isn't). He makes statements that the leaks at Vermont Yankee from the underground pipes will result in the biggest environmental disaster in the history of the state. I don't feel like repeating it all here. If you want to read this stuff, use the search box to search this blog for Peter Shumlin.
Irony Happens. Todd Bailey is a director of the League of Conservation Voters of Vermont, and an important person in the 527 organization Green Mountain Future, the "Attack Ad Company."
On the Vermont Tiger blog, Todd Bailey claims that Art Woolf misquoted Shumlin and took Shumlin's words out of context. Read Bailey's comments on Woolf's post at Vermont Tiger. Poor Mr. Shumlin. After repeating early and often that VY is the biggest environmental disaster in Vermont, Shumlin doesn't want to be quoted as having said that VY is the biggest environmental disaster in Vermont.
Todd Bailey may be great with attack ads, but he can't successfully defend Shumlin. Because really, there is no defense. Shumlin says what he says. People quote it. That's what happens.
Photo of a transportable Ferris Wheel at a carnival in the Netherlands, through Wikimedia.
Posted by Meredith Angwin at 1:51 PM