Some Thoughts on Decommissioning and Carpetbaggers 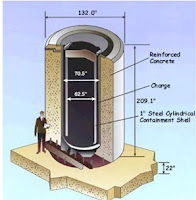 Vermont Yankee Decommissioning
I think Vermont Yankee will continue to operate, but the opponents are having a great deal of fun planning the decommissioning. There was a big meeting in Brattleboro late last month, with all sorts of speeches and excitement from the opponents. Howard Shaffer attended and blogged about it at the ANS Nuclear Cafe this week. Quoting that blog:
They demanded a “Citizens Oversight Panel” to allow them to dig in to the process, and in the words of one of the panelists, Ray Shadis, to “advocate.” It turns out that this means agitate for unrealistically low post cleanup exposure standards. They achieved this in the past by getting state standards to be lower than the Nuclear Regulatory Commission standard. This has had the effect of making decommissionings much more expensive. They boasted that, regarding the decommissionings of Maine Yankee and Yankee, the owners had to go back to the ratepayers for more money, which will be in the ratepayers’ bills for years.
I think it is only fair to note that Ray Shadis commented on this post:
I regret that I may have left you with the impression that environmental and safety enhancements we advocated at Maine Yankee drove up big costs. That was not the case.
Since I am quoting Ray, I will also quote something else. Howard emailed me that Ray made this statement at the meeting. I trust Howard to be an accurate reporter.
"We had them by the short hairs because we were intervenors." Ray Shadis
Those Workers
Howard also picked up a handout from the Vermont Citizen's Action Network and Citizen's Awareness Network, two related organizations. This handout about decommissioning was distributed at the meeting. Here's a quote:
Although waiting the proposed twenty years cuts costs and lowers worker exposure, Entergy shouldn't be trusted. Its systemic mismanagement and dishonesty makes delaying cleanup too dangerous. (emphasis added by blogger)
Apparently, in their view, increasing worker exposure is not "dangerous." Something else (delaying?) is dangerous to someone (intervenors?). Workers are a kind of untermenschenen whose safety does not matter.
Well, I could go on. For example, there's a whole anti-Yankee program to get towns in other states involved. I'm not going to review that effort in this post.
The Green Fields of Vernon?
An important part of the anti-Vermont Yankee agenda is to have decommissioning done to "greenfield" standards, instead of traditional NRC standards. In greenfield standards, the site basically becomes a park, with little trace of its industrial past. In traditional decontamination, most of the site can be released for other uses within a few years. In other words, new industrial facilities can be built there. After all, the site probably has switch yards, areas for water cooling of various processes, etc. It would be a great site for another industry.
The actual citizens of Vernon, many of whom work at the plant, have applied for a grant to study options if the plant closes. According to the Brattleboro Reformer, they plan to:
look into scenarios without the plant on-line, such as analyzing tax incentives for new industries, potential redevelopment of the site and reviewing how other towns dealt with closing of a nuclear plant.
The people in Vernon would rather have a new plant on-site than a park. They won't have this option if the intervenors once again grab the short hairs.
Carpet Baggers
This whole thing made me think a bit about who the intervenors are. Shadis is a regular commuter from his home in Maine. Katz lives in Massachusetts. People come in from all over to fight against Vermont Yankee. From the testimony of their own brochures, these people don't give a hoot about the health of people who work at the plant. They don't think that the people in Vernon are citizens who might choose to make land-use decisions for their own town.
My advice to the intervenors. If you want a park where the plant is located in Vernon, get the idea onto the Warning for the Vernon Town Meeting. That's the traditional Vermont thing to do.
Oh, you can't do that because you don't live in Vernon? Aw shucks. Lemme tell you about how we do things in Vermont. It's not Massachusetts or Louisiana, you know.
Image of dry cask storage from NRC student information area.
Posted by Meredith Angwin at 7:23 AM

I wonder - exactly how *do* environmentalists get so much power/influence over these processes in other towns and States? They're not the owner, they're not the NRC, they're not the State PUC (Public Utilities Commission - or equivalent, whatever it's called in your state).

How is it that these environmental groups are in a position to 'grab the short hairs'? I'd guess that they must get some group of local citizens to sign petitions, write letters, or otherwise establish to the local authorities that the environmentalists are 'representing' local citizens who *would* have some sort of standing to complain or comment?

As I explained the night of the decommissioning meeting "greenfield" is not a term used in NRC space. The cleanest option in NRC regulations is "unrestricted release," which osrensibly renders the site fit for any reuse unto and including subsistence farming. I also explained that in 1997 EPA chief, Carole Browner sent NRC a memo to the effect that NRC's residual radiation standards were not protective of human health under CERCLA. Which brings us in a kina CERCLA- States use the term greenfield but it generally refers to chemical,not radiological clean-up.
Shorthairs? Yes, few nuclear companies will come to the table for serious discussions about improving operations or decommissioning unless it is in the context of litigation.In the case of FERC, generators generally want money and they want it now. It's the perfect time and place to get their attention.

Prompt v. SafeStor decommissiong? We are not about exposing workers. In fact the largest diect radiation dose contributor is Cs-137, a a twenty year wait does help all that much. The companies that decomissioned MY,CY, and Rowe all kept cummulative dose below LTP targets. At MY extensive chemical and abrasive decom of the RPV and hot loop helped considerably.
Carpetbaggers? Mredith, I've been a trustee of New england Coalition since 1982; a witness before the VPSB since before Entergy came to town; I've got grandchildren, in-laws, nieces and nephews, and a share in property in Vermont. Even if that were not the case, Entergy Vermont Yankee is an unwarranted risk to the health and the economy entire region.

I try to be accurate and find it helpful to have you and Howard report your perspectives on what I say. A big part of my small success over the years has been the exchange of respect with my opponents, so I count among friends may in the nuclear industry, at NRC, and even among displaced nuclear workers. Let's step up the level of our discourse, shall we/
Thanks,
Raymond Shadis

Ray. Umm.. Level of discourse? I'm not the one who spoke in public about having the regulators of a neighboring state by the "short hairs." Those are your words.

If you come to Vermont and testify before the PSB, well, anyone from any state can do that. I have seen you do that many times. When you testified, I never said or implied you were a carpetbagger.

However, when you come to Vermont with the intention of making land use decisions for a town you don't live in, when you are delighted about manipulating that state and town's regulatory process and grabbing the short hairs--you are a carpet bagger.

Meredith, is it a bit like the pot calling the kettle black for you to be calling Ray a carpetbagger? You come into town and tell us we need to live in the shadow of a nuclear reactor and you live 70 miles away. Howard Shaffer lives in New Hampshire. How does he have any more right to say we should have a nuclear reactor in our midst than Ray from Maine or me from Massachusetts should say that we should not? I live 10 miles away from that reactor on the banks of the CT. river. Are you doing to call me a carpetbagger too because the Europeans that stole the land now called Vermont were a different group from the ones who stole the land now calle Massachusetts?

This is ridiculous. I don't "tell" anyone where they "need to live." If you choose to live within 10 miles of something you don't like, that is your choice. Something that was probably there before you bought or built your house.

Maybe not. Maybe you moved there in the early sixties or something. Or you inherited the land. But I suspect you moved there AFTER the plant was put in service. Am I right?

I am sorry you live in a place that you find uncomfortable. I assure you, however, I had nothing to do with your choice to live there.

Meredith - many of your readers - Ray Shadis excluded - probably do not fully understand the economic importance of the word "intervenor". When a group or individual manages to be legally declared an "intervenor" in a proceeding by the NRC (and most PUCs), they have obtained what most Americans would love to have - a guaranteed job with an expanding source of income.

Under most circumstances when there is a legal proceeding underway regarding a nuclear facility, the intervenor can bill for its time spent preparing for hearings. Though there may be some laundering of the bill in which it passes through various hands, the actual payer is the owner of the nuclear facility.

The intervenors have a huge incentive to stretch out the decision process because it keeps the money flowing in. The facility owner has an incentive to make a deal to stop having to pay both the intervenor and its own representatives that have to keep responding.

Shadis and his cohorts understand the ins and outs of this incredibly silly system; that is why they love it when they are able to prove "standing" and get declared an "intervenor". One response is to be ready to show a court of law why the classification should not be granted. Being a long distance commuting carpetbagger might be one reason; another might be exposing some very light technical qualifications of the hired "experts".

Meredith - for an indication of Shadis's true motives and goals, it is worth reading this blog post from his own keyboard in 2006.

Whoa!!! here comes Rod Adams from another state tellin' us locals what to do! I live closer than any of you to that old relic and Meredith is tellin' me I gotta move away cuz that ole nuke is more important than I am. And what about the poor native americans whose children play on the mine tailings or the poor black communities in Barnwell where the radioactive waste is dumped. is your precious nuke more important than them too? Where do you propose we all live? Well, I ain't movin' you hypocritical carpetbaggers!

I am sorry you are so upset, John. I doubt if I can explain anything to you while you are so angry, but I will try.

I called Ray a carpetbagger for expecting to get the regulators by the..oh, enough about those hairs already.... A translation of his crude statement: Ray plans to use his power as an intervenor to make sure the plant site will become a de facto park, not an industrial facility. The locals have other plans that would help their economy.

Ray made it very clear that he planned to compel the regulators to do certain things with the land. The local people are studying the site to see what they can do for themselves. The difference in approach appalled me. Coming in from Maine and over-riding the neighbors on land use decisions is a bad thing to do. That is my opinion, and I am sticking to it.