Wind In Vermont: The Way it Is Today 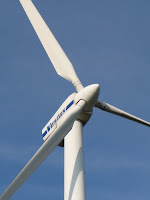 Governor Peter Shumlin of Vermont is in favor of replacing Vermont Yankee with out-of state and out-of-country power, and of course with renewables.The renewables part isn't going very well.
Can't Make the Wind Blow with a Just a Smile
The video below shows Peter Shumlin attempting to shake hands with people who are protesting the Lowell Mountain wind farms. Shay Totten of 7 Days Vermont included this video in his blog post Occupiers and Environmentalists Confronting Vermont Democrats. The post is worth reading.

One interesting quote from the Totten article:"When Gov. Shumlin opposed Vermont Yankee, he was doing the right thing and we supported him. But then Green Mountain Power turns around and buys power from Seabrook [Nuclear Power] and he says nothing. Why not?" said Eric Wallace-Senft of Woodbury.
Indeed, why didn't Shumlin object to buying nuclear power from New Hampshire? Probably because Governor Shumlin is learning some things about energy supply. In March 2010, Shumlin went on national TV and said that Germany got 30% of its electricity from solar. Now, a year and a half later, Shumlin may have learned the definition of baseload.
Property Rights and Protests about Wind
Meanwhile, there are wind lawsuits. The most active one is about property rights. A retired couple, Don and Shirley Nelson, are neighbors of the Lowell Mountain Wind project. They don't like the project.
The contractor for Green Mountain Power is blasting a road near Nelson's property, and wants to be sure nobody is hurt by "flyrock" (blast debris). Wind protestors are on the Nelson's property, and they refuse to move for the blasting. After all, they are on private property by invitation. Nelson's attitude is that he never gave anybody permission to spread flyrock on his property anyway. It has ended up in court (of course).
Terri Hallenbeck of Burlington Free Press has an excellent article on the situation. Green Mountain Power first told the Nelsons they would be sued for the cost of delays. The threat was a bit of a public relations nightmare, of course! Next, Green Mountain Power offered to buy their land. So far, the Nelsons have not budged.
Two quotes from Don Nelson, from the Hallenbeck article:“After 40 years of working, if you had to sell to someone who wanted to destroy what you built, would you?” asked Don Nelson, who grew up on the property and raised his family there....(Green Mountain Power sent) a letter to the Nelsons warning them that Green Mountain Power would take them to court and hold them financially responsible for the cost of any delays caused by the campers on the ridgeline. The Nelsons characterize that as a threat to force them into selling.
“I was supposed to say, ‘Please don’t give me a million-dollar lawsuit,’” Don Nelson said. “It’s not going to happen.”
Update: The Nelsons lost the first round in court, and are appealing the verdict. Terri Hallenbeck has the story at Burlington Free Press. Summary of the appeal, from the Nelson's lawyer: “The Nelsons have the right to the exclusive use and occupancy of their own land and to deny the use of their land to others, including GMP, regardless of how important the use of the Nelsons’ land may be to GMP.”
Meanwhile, my friend Willem Post has an excellent article in Energy Collective: Was Vermont's Lowell Mountain Wind Turbine Facility a Good Idea? His answer is no, considering both cost and environmental impact.
Renewables for Vermont?
When I show up somewhere with a pro-Vermont Yankee sign, and I try to convince an opponent that nuclear is safer and better than fossil, the opponent is sure to tell me that "We don't need either fossil OR nuclear. We can meet our energy needs with renewables!"
Sometimes I wonder if the opponents actually live in Vermont.
Vestas wind turbine photo from Wikipedia
Posted by Meredith Angwin at 10:00 AM

I apologize for this off-topic comment, but this amazing speech by Entergy's CEO, J. Wayne Leonard, really needs to be widely distributed, especially in Vermont.

His comments on climate change and the need for action should give environmentalists (and particularly those in Vermont) something to think about.

SteveK9 (one of your neighbors in NH)

Thank you, Steve! I was very moved by this. I can't think of two more different people than the president of Entergy and the Dalai Lama. This week, they have both expressed the moral imperatives for nuclear energy. It is very reassuring to see such broad support.

I'm sure there's good arguments against Wind and Solar. However, I think we should be fighting against this BANANA'ism - Build Absolutely Nothing Anywhere Near Anyone.

This sort of stupid ability of anyone to stop someone else's development project is a big problem in the U.S., not just for Wind and Solar farms, but for practically any heavy industry or business.

I realize part of this is reaction to the abuses of the past, when no one objected to development at all, and there was a lot of polution, and real problems. I hope we can, as a nation, find a middle ground that stops the bad offenders, but still allows for important economic development.

This same obstructionism is very much a part of what makes it so hard and expensive to build nuclear plants, isn't it?

I will say, however, that at least with a nuclear plant, if you can get past the obstructionism on a single site and get a plant built, you might have anywhere from 100MW to 3 or 4GW of power generation. Solar and wind will likely have to face such fights many, many more times because they will need many, many more sites to generate similar quantities of power.

Still, in this case, I think the nuclear industry and nuclear advocates would be wise to recognize that BANANA/NIMBY-ism is a problem they should make common cause against with solar and wind supporters.

Thank you all for your comments.

jeff. I agree. BANANA NIMBYism is a huge problem. In general I don't like to see power projects being stopped by protestors. However, there's a bit of a backstory here that I didn't share. This Lowell Mountain project is economically unfeasible unless they get a federal subsidy, and if they don't complete the project in a certain timeframe, they lose the federal money. So the developers have been riding roughshod over their neighbors, in my opinion. They could do smaller blasts, or use different types of equipment to build the road, and NOT have flyrock on their neighbors property. But they are rushing to completion, and don't have time for such courtesy. I think they are violating property rights. It shows a certain arrogance.